Your Fitbit Knows When You've Been Dumped

Fitbits were one of the gifts to get this holiday season. If you received one, we can only guess you’ve spent the past month taking extra laps around the office, pacing back and forth while binge watching Making a Murderer, and trash talking friends in daily challenges. Your trusty Fitbit measures your steps, the calories your burn, the stairs you climb, and for those who received a Charge HR, your heart rate. What you might not expect is it can also tell you the moment your heart breaks.

Around noon on January 16, Koby Soto’s then boyfriend called him and let him know he was ending the relationship. Afterwards, Soto, a law student and the founder of Guesty, an AirBnB management service, found it difficult to relax or concentrate on his studies for the rest of the day. He opened up his Fitbit app to prove to a friend his heart rate wasn’t “resting” and that he couldn’t relax.

Before the call from his now ex-boyfriend, Soto’s heart rate was resting at 72 beats per minute. After the call, his heart rate shot up to 88 bpm and continued to climb the rest of the afternoon, almost reaching 118 bpm. This put him into “fat burning mode” for just over an hour and a half. Surprised, he posted the following image on Twitter a few days later. 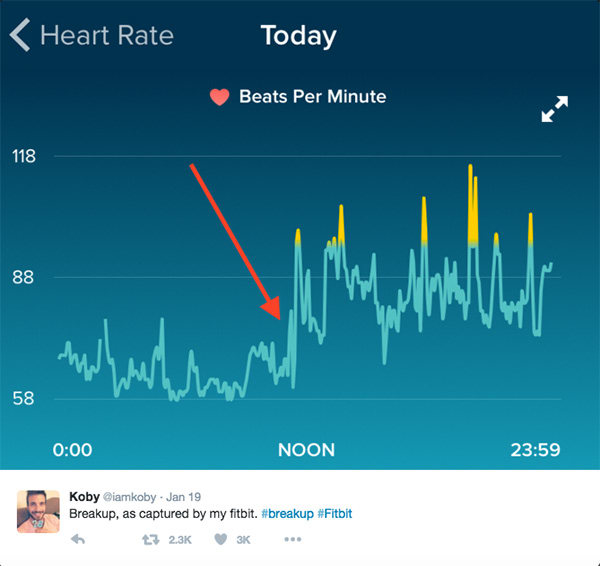 Why does this happen? Namely because your brain thinks you’re in trouble. According to Naomi Eisenberger, Ph.D, the region in your brain that lights up when you get dumped is the same that goes into overdrive when you’ve been physically injured. This can also cause your body to release the stress hormones of cortisol and ephinephrine, leaving you with aches, pains, digestive upset, and make you more likely to come down with a cold.

In a recent interview, Soto told Buzzfeed, “I feel like it’s nice to have a log of your confirmation of what you felt. You can tell people you have heartbreak and you feel bad. People become less cynical once you show them the numbers or once you show the data or graphs.”