Yoga is truly for every body. But doing yoga the “right” way, with an emphasis on proper breathing, alignment, and form, can help ensure you reap yoga’s benefits while keeping your body safe.

The proper yoga forms you see demonstrated in Yoga52 videos and in classic yogic texts were developed for reasons that go far beyond the aesthetic.

“Even though the classical pose (and alignment) may be harder to do, that’s where you are safest,” says Dr. Loren M. Fishman, M.D., who studied extensively with B.K.S. Iyengar and has published research on yoga’s healing effects. “There is less strain on the ligaments, tendons, and cartilage in the classical pose than in other versions.”

Duran says it’s normal to feel frustrated when you aren’t “mastering” yoga form fast enough or moving the way you want. She compares it to learning to walk: “You just learn, practice, and one day you get it.” But don’t rush it. That’s how injuries happen. Let’s look at some of the common yoga form mistakes — and how to fix them.

If you’ve always wanted to try yoga or want a new yoga class, check out Yoga52 on Openfit or the Openfit App!

The 10 Most Common Yoga Form Mistakes

Most seasoned practitioners have made the same yoga form mistakes you see on this list. “Your yoga poses may not look like the picture or anyone else in the class, but notice how they feel,” recommends Ann Swanson, M.S., C-IAYT, E-RYT 500. Yoga shouldn’t hurt, but you should still feel something.

1. Cupping your hands when on the floor 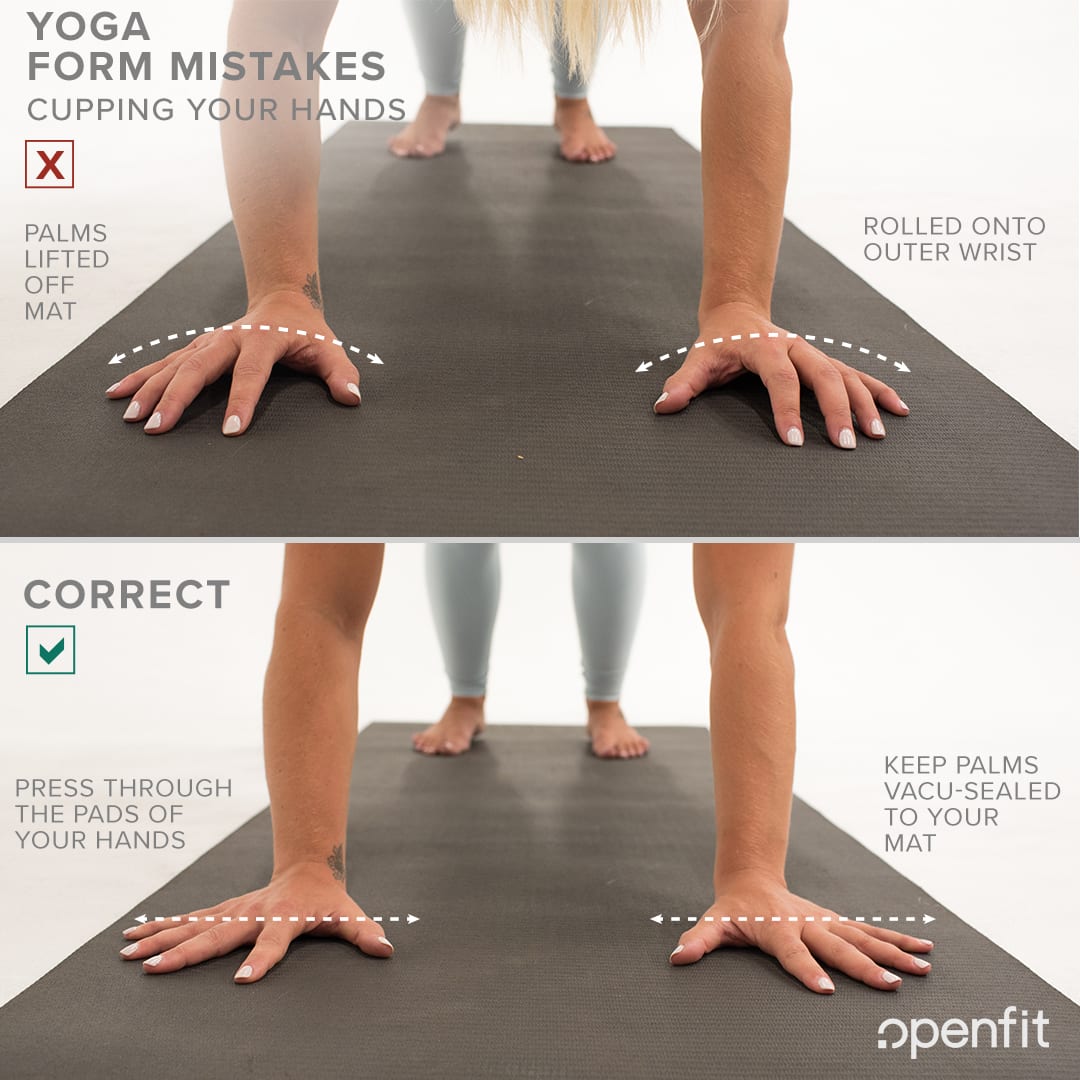 Ever notice your palms start to lift off the floor in poses like downward facing dog? “The wrists are a common site of injury, which can result when we don’t distribute weight appropriately throughout the hands,” says Yoga52 instructor Odette Hughes.

The fix: Flatten those hands. “Usually, simply bringing attention to your hands is enough to correct what’s happening,” says Hughes. “I ask students to keep their fingers spread apart and to press evenly from the pinkie side to the thumb side.”

2. Dipping too low in chaturanga 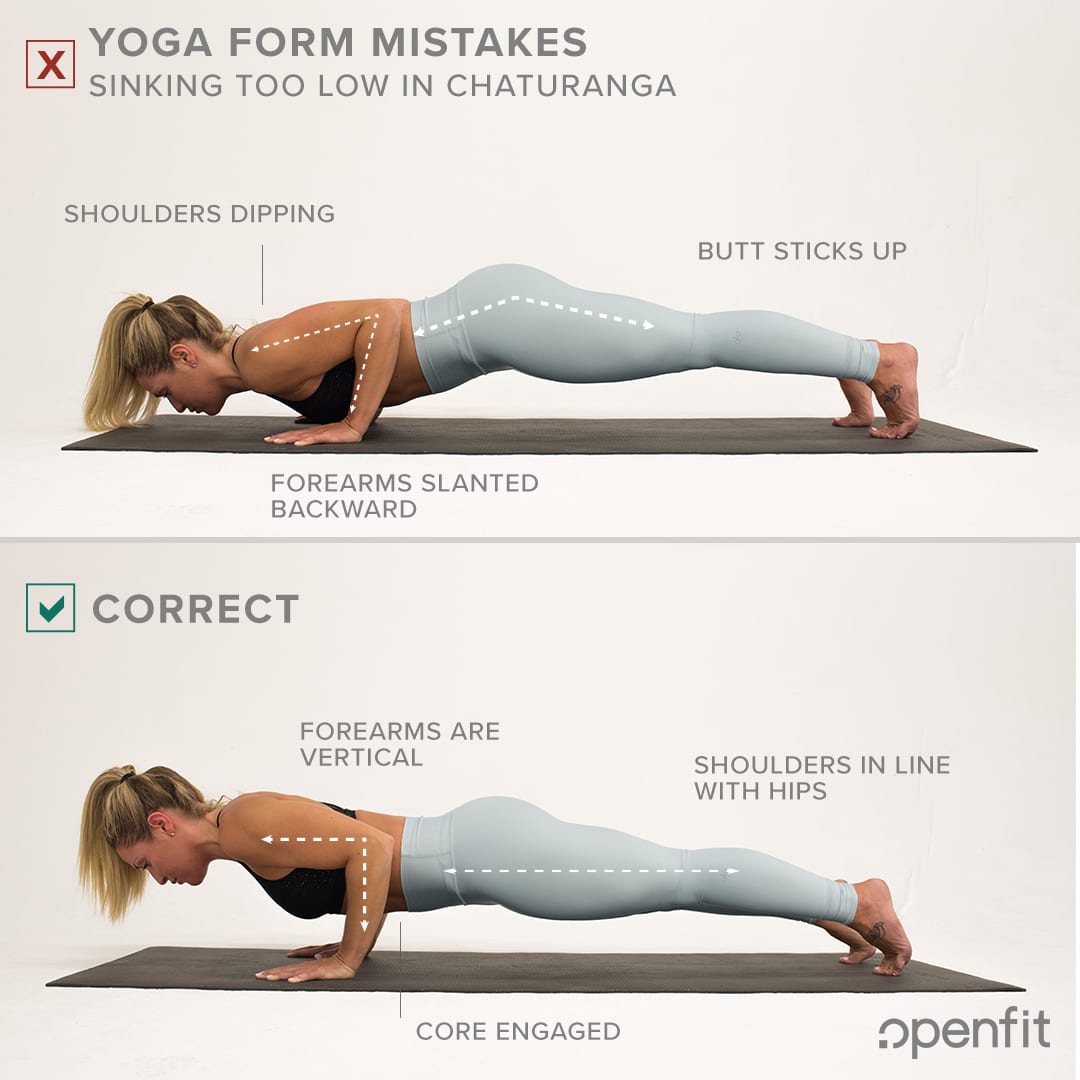 Chaturanga dandasana is a challenging yet common pose, and it’s easy to go too low, especially in vinyasa flow classes where it’s repeatedly used as a transition. “This could trigger a shoulder injury, by combining improper form and repetitive movements,” says Marie Grujicic-Delage, a Yoga52 instructor.

The fix: Adjust your depth. “Lower only halfway down so your elbows form 90-degree angles — never go lower,” explains Grujicic-Delage. “Your shoulders should be in line with your hips and elbows.” If you can’t maintain that form, drop to your knees.

3. Straining your front knee in pigeon 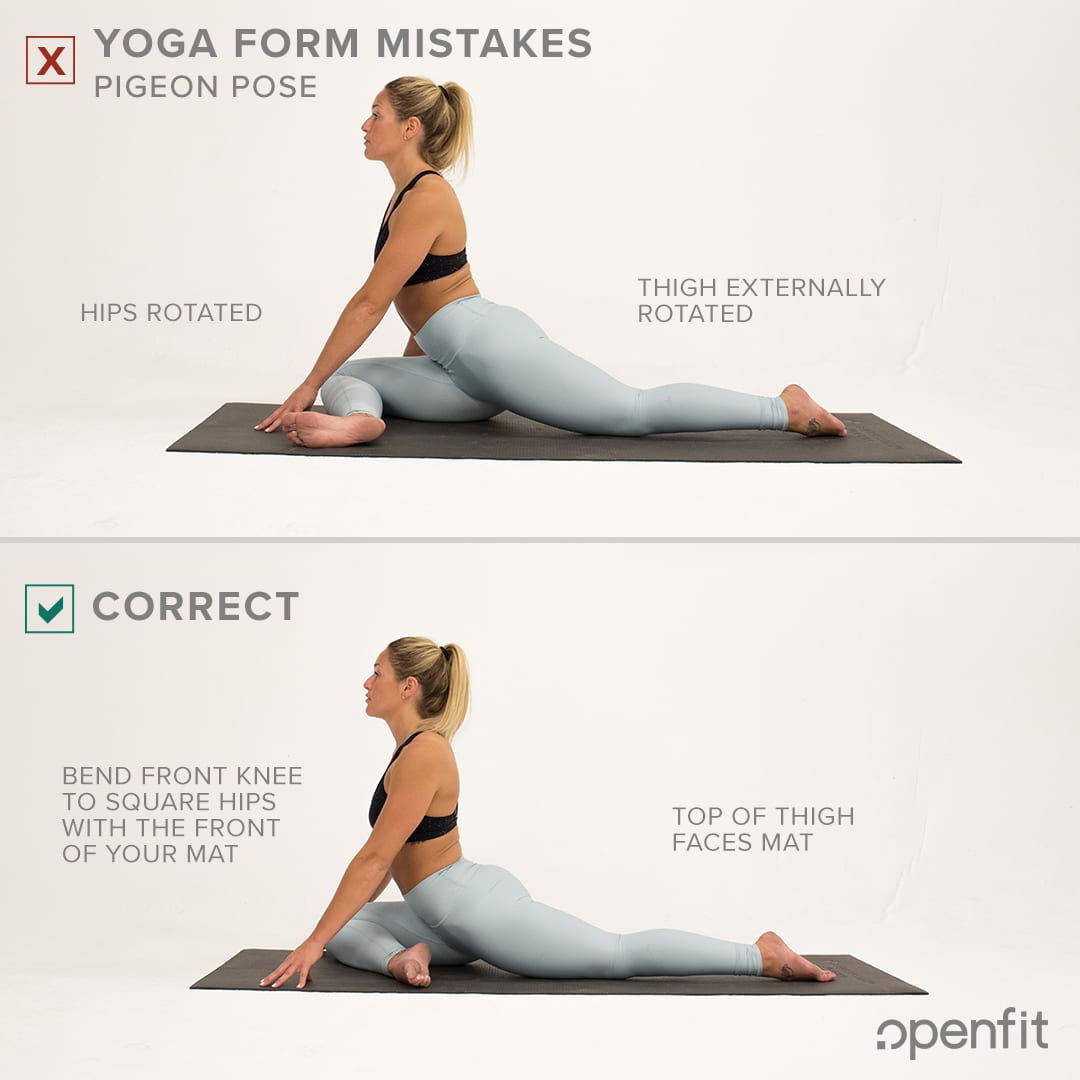 Pigeon pose feels so good in the hips, but oftentimes we put the front knee at risk to feel more of a stretch. “Most teachers encourage students to position their front shin parallel to the front of the mat,” says Yoga52 instructor Brent Laffoon. If you can do that, great, but forcing it can strain the ligaments in your knee.

The fix: Forget parallel if that causes pain. “Just pull the heel of your front leg in toward your groin, and let the thigh and knee point a little bit more forward,” says Laffoon. “You can still get a great stretch this way. In fact, if you have sensitive knees, this will give you an even better stretch.”

4. Rounding your spine as you fold forward 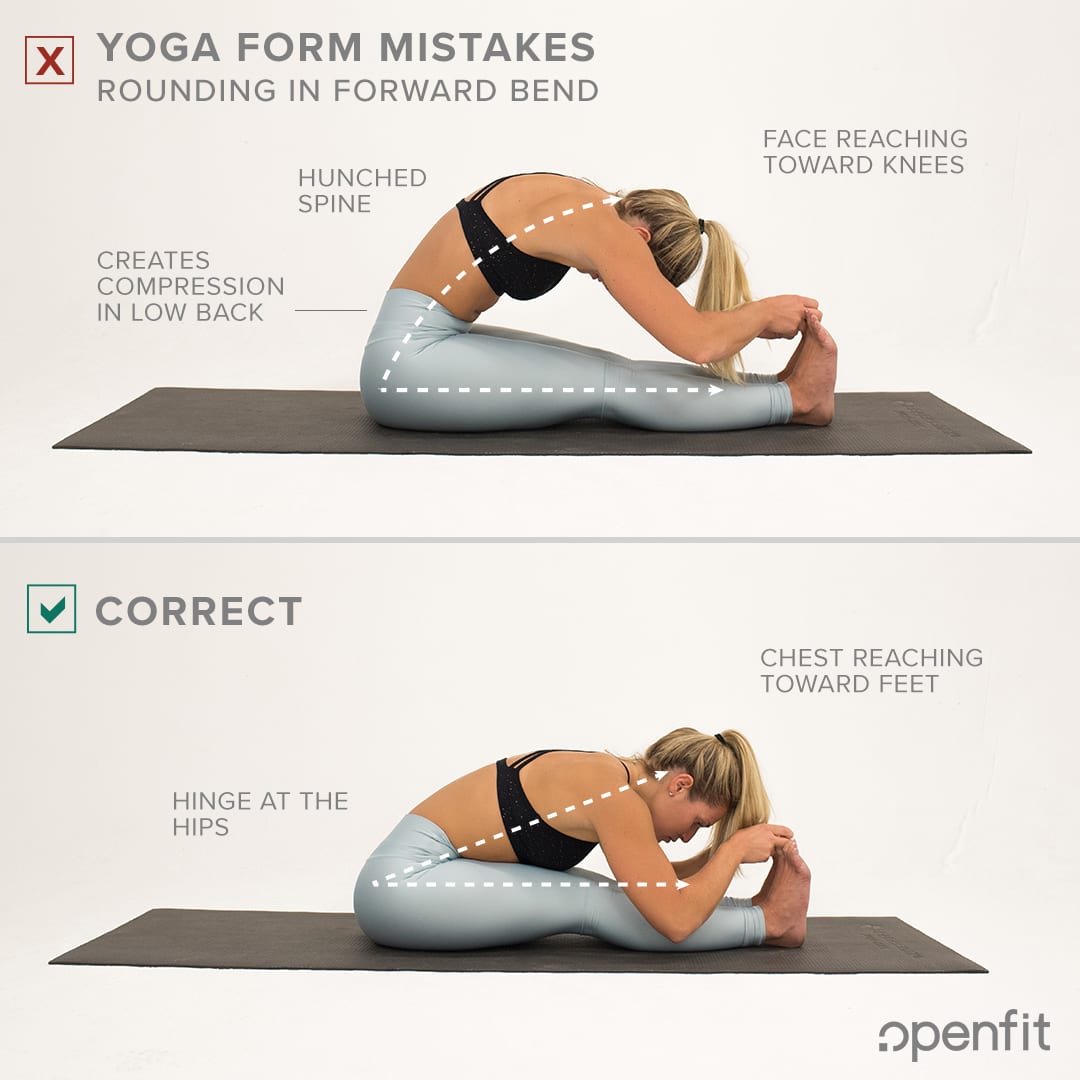 During sun salutations and other sequences, you may be tempted to round your back as you fold forward toward your toes. “As a guideline, we want to fold from our hips and not from our backs,” says Hughes. “This puts a lot of pressure on the lower back while offering almost no stretch in return.”

The fix: Find space elsewhere in the pose. “Usually, rounding your back tells me you have tight hamstrings, which is completely OK,” says Grujicic-Delage. “You just need to bend your knees.” Keep them bent as you come out of your forward fold, too.

5. Misaligning your knee with your ankle 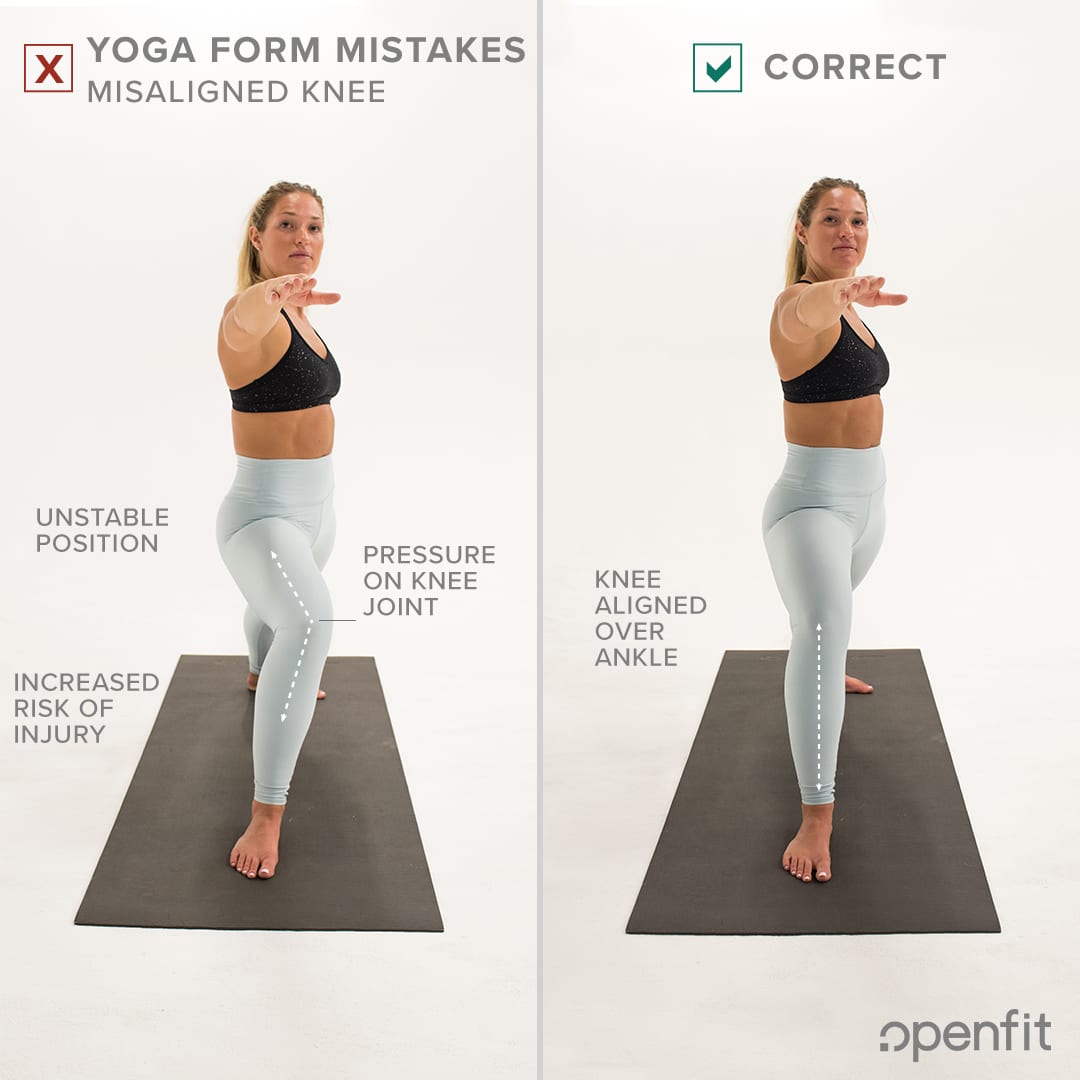 Many standing yoga poses involve lunging, and it’s common to see students’ knees cave inward or bow outward relative to the ankle. Your knee is a modified hinge joint, explains Swanson, so it can rotate slightly when flexed, as in a lunge or warrior pose. “When it rotates, it puts uneven pressure on the joint structures, which can cause damage over time,” she says.

The fix: Stack your knee directly over your ankle. That way, “pressure on the joint structures is more evenly distributed, preventing potential injury,” says Swanson. “If you notice your knee always seems to fall in or out in a certain pose,” adds Hughes, “try taking up more space across the width of your mat.”

6. Scrunching your shoulders up around your ears 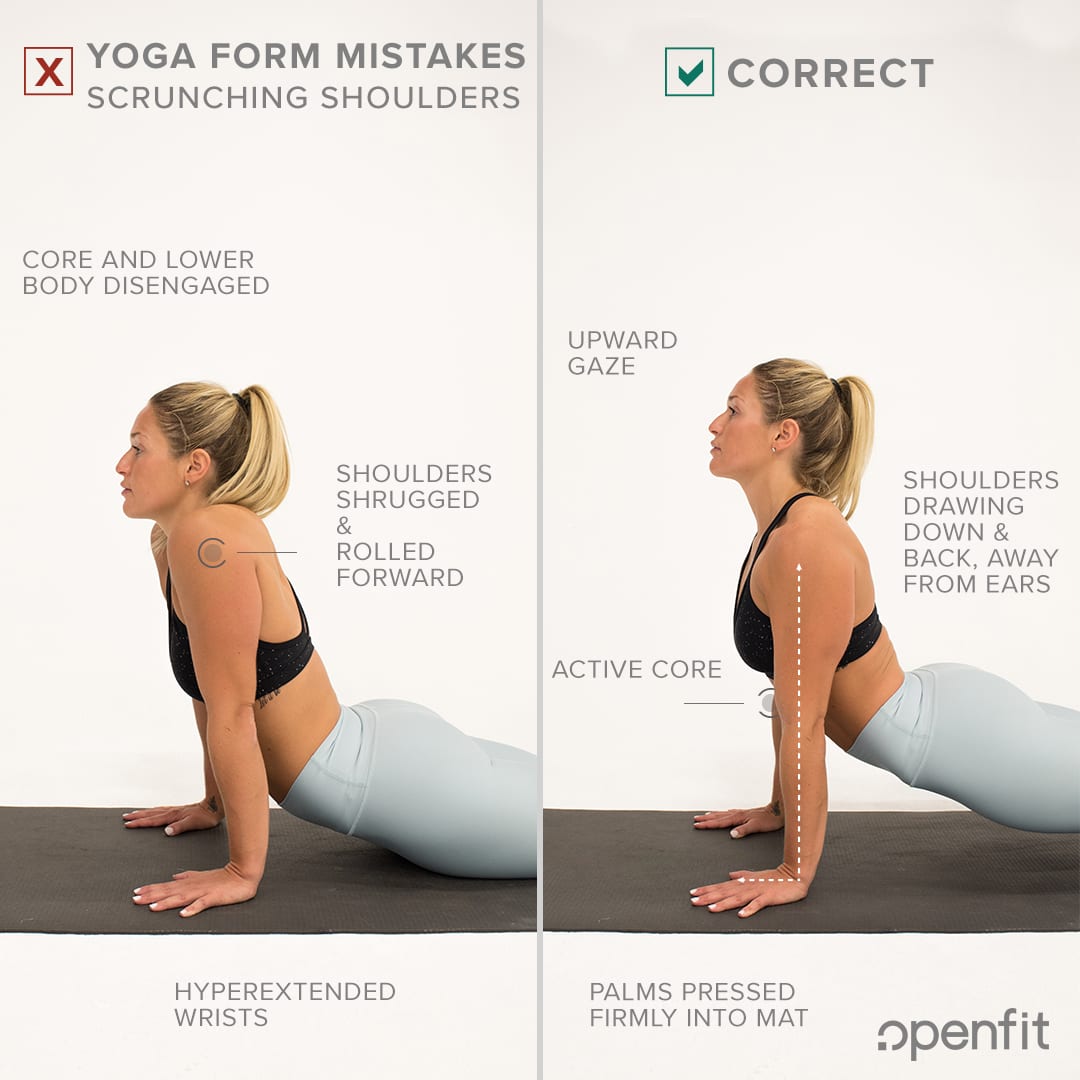 Scrunching happens a lot in yoga, because we tend to over-engage the upper trapezius muscles, says Swanson. “When raising the arms overhead like in warrior I or tree pose, people will often lift their shoulders too high, squeezing them toward their ears,” she says. It also happens in deep backbends like upward facing dog, where “it compresses the cervical (neck) vertebrae,” says Hughes.

The fix: Relax your shoulders. In standing poses with the arms raised overhead, find a balance between squeezing your shoulders up and forcing them down. (“There is a middle way,” says Swanson.) If need be, widen your hands to shoulder distance. And in up dog, “press down a lot through both hands, keep your gaze forward instead of upward, and pull the top of your head upward to keep your neck long,” advises Hughes.

7. Compressing your lower back in backbends

“Backbend” is a slight misnomer — there’s a lot more going on than the name suggests. So, when you’re solely focused on the bending part, you may end up feeling poses like camel or wheel in your lower back. “Any time you’re doing a backbend, it’s important to use your legs and core to lengthen the spine,” says Laffoon. This prevents you from straining your lower back.

The fix: Shift your focus. “In camel pose, the shins and tops of the feet (or balls of the feet if toes are tucked) should press firmly into the floor,” says Laffoon. “This not only drives the hips forward in a healthy way, it also helps create a foundation from which the spine can lengthen. The belly should be engaged to protect the low back, the shoulders should be drawing down to create space for the thoracic spine to arch, and the chest should be lifted.” 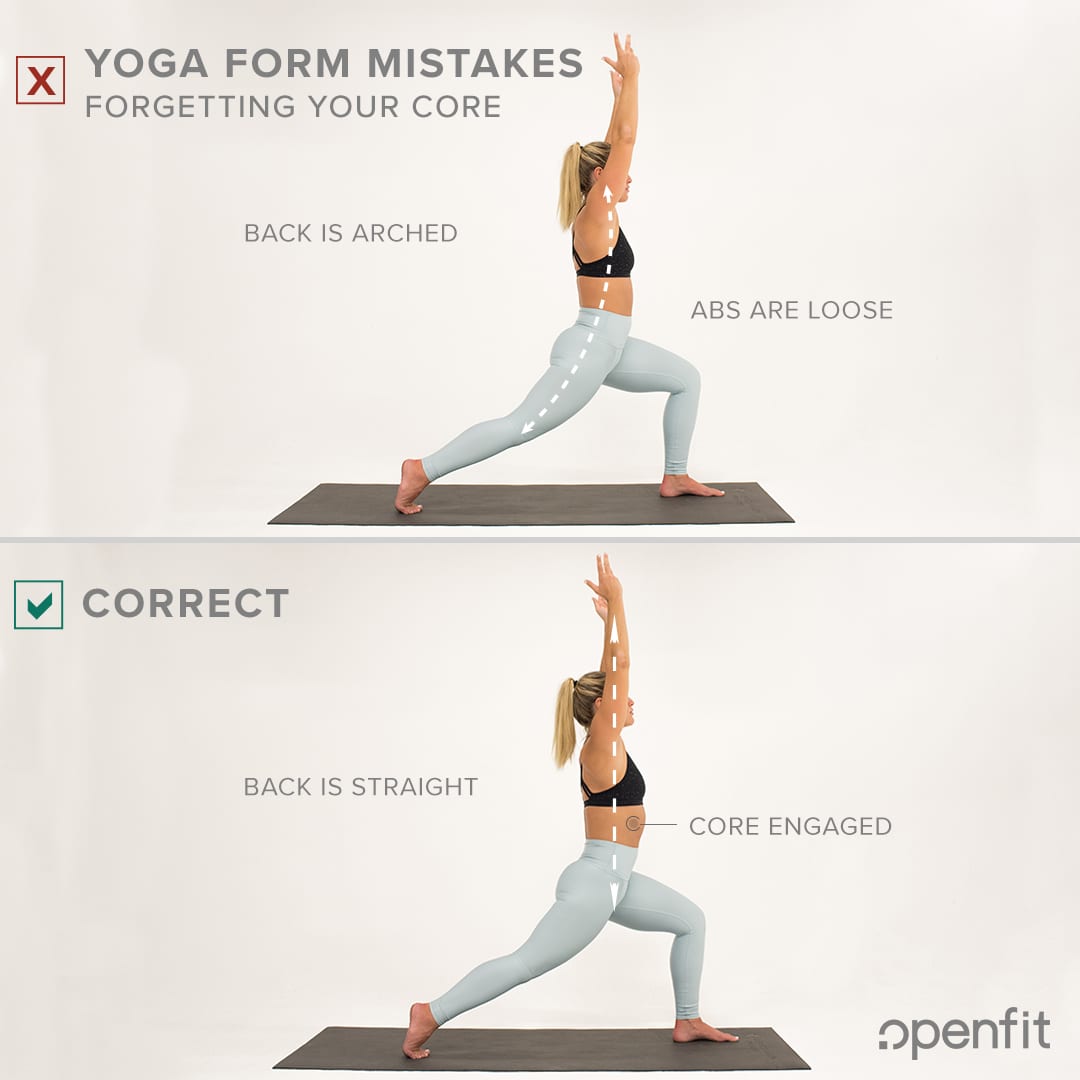 There’s a lot to remember in yoga, so it’s easy to skip or forget certain aspects of poses — like engaging your core. “Your deep core muscles stabilize your spine, so it’s important to keep them engaged at all times,” says Grujicic-Delage. And not just during poses. “Students tend to rush themselves and forget to use their core support while transitioning from pose to pose,” says Hughes. “Many injuries happen between poses.”

The fix: Keep calm and engage the core. “I encourage students to move more fluidly, even if they’re moving quickly, so the movement is more gradual,” says Hughes. “The reason is not for aesthetics or to make the movement more graceful — although it will — but so that you train your joints and muscles to control and stabilize every part of the movement arc.”

9. Hyperextending your elbows in down dog 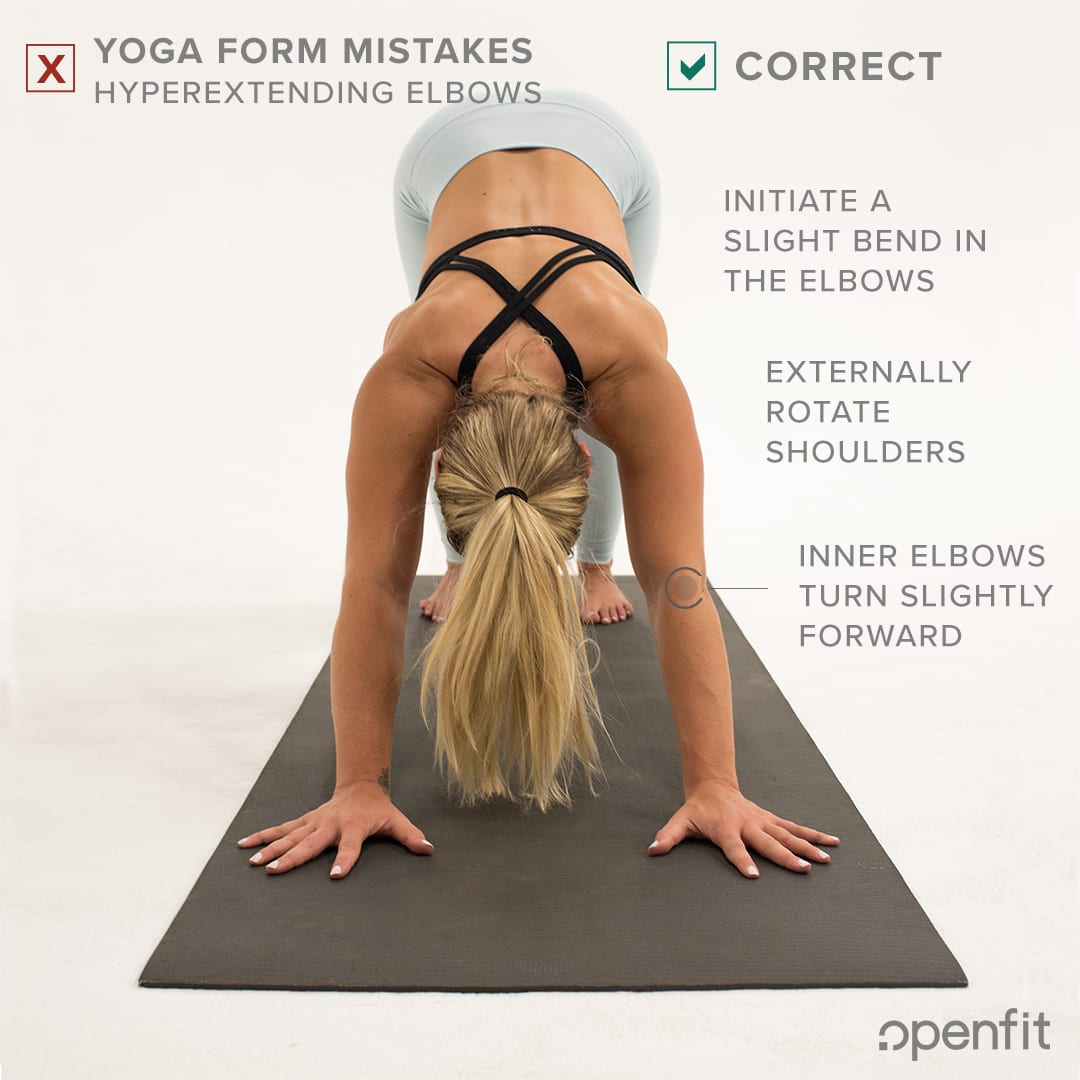 I’m the poster child for this mistake, and it will cause injuries, so take note. If you’re flexible, you might find yourself overstretching your arms and putting undue strain on your elbows, too. “Hyperextending your arms while bearing weight, like in down dog or upward dog, puts uneven pressure on the elbow joint structures, which can lead to damage and even osteoarthritis over time,” says Swanson.

The fix: Redefine “straight” arms. “You need to work on strength and stability to keep congruency and integrity in your joints,” says Grujicic-Delage. Bring your hands a little wider, then micro-bend your elbows. Engage your biceps, then externally rotate your upper arms to get the triceps working, she adds.

10. Resting your foot on your knee in tree pose 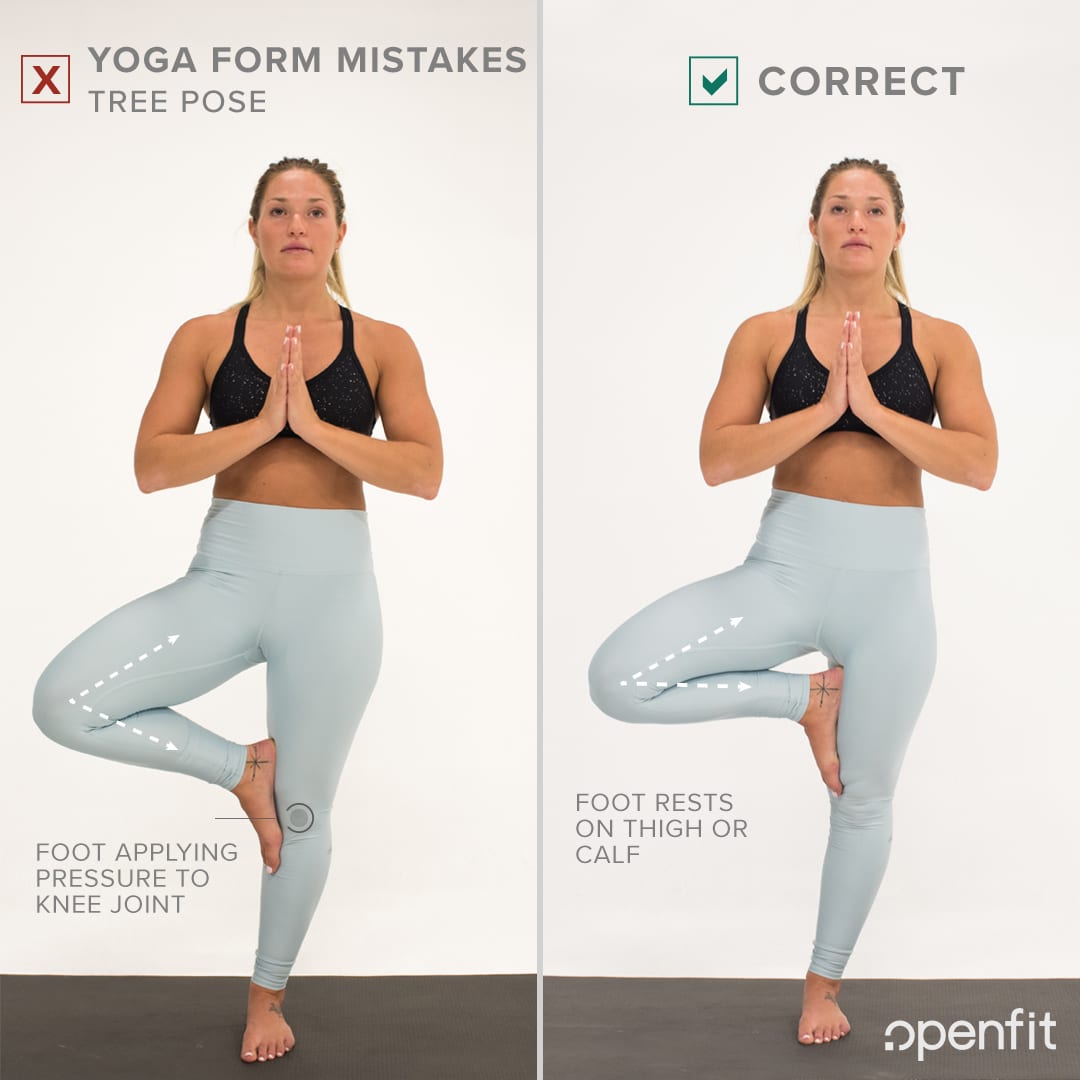 Doing tree pose with your raised foot against your standing knee is (unofficially) the number one mistake yogis make. But it’s the easiest to fix. “Never press on a joint as a general rule,” says Grujicic-Delage. “Pressing on the inside of your knee could cause you to sink into your hip instead of lifting out (and strengthening) it.” And, if you wobble, you could strain your knee.

The fix: Grow your tree slowly. Practice tree pose with proper yoga form, placing your foot either above or below the knee.

Take your practice further with Openfit’s Yoga52, a collection of 52 elegantly produced yoga classes from beginner to expert taught by five of the world’s leading yoga instructors.