What Are the Benefits of Witch Hazel?

Witch hazel is one of the O.G. skin care products — my grandma and my mom both swear by it, and I’ve been using it for years. But it tends to get overshadowed by expensive creams, cleansers, and serums.

Recently, though, the clear toner has been making a comeback — it’s been popping up as a trendy ingredient in skin care products. So what is witch hazel — and does it still have a place in a modern skin care regimen? Here are the benefits and drawbacks.

What is Witch Hazel?

Witch hazel sounds like a cocktail you’d drink at a Halloween party — but it’s actually a plant extract that’s been used for hundreds of years for its health benefits, says Purvisha Patel, MD, board-certified dermatologist and founder of Visha Skincare.

Extracted from the leaves and bark of the Hamamelis virginiana shrub, witch hazel is best known for its skin care benefits. “Witch hazel leaf extract is used in skin care products because it is a source of several types of antioxidants, including gallic acid and tannins,” Patel adds.

Witch hazel can also be added to herbal tea — but only in extremely small doses, because it can be toxic (or even lethal) when too much is ingested.

What Are the Benefits of Witch Hazel?

Witch hazel is the most beneficial when it’s used topically, Patel says. Here’s why it may be a worthy addition to your skin care routine.

With hazel contains gallic acid and tannins — two types of polyphenols with powerful antioxidant properties. Multiple studies have shown that witch hazel can help relieve inflammation caused by skin conditions such as acne. Research also suggests with hazel can help soothe the skin after UV exposure, and it’s FDA-approved for use in reducing skin irritation due to bug bites or minor cuts.

Witch hazel is an astringent, which is comparable to an extra-potent skin toner. By removing oil from the pores, with hazel can help reduce the appearance of pores, Patel says.

One caveat: Witch hazel can be drying, which can make your skin “more susceptible to the outside environment,” Patel says — so if you have sensitive skin, you may want to try a gentler product, like a lotion or ointment, that contains witch hazel.

If you have sensitive skin, Patel says, you don’t have to avoid witch hazel altogether — in fact, witch hazel may benefit sensitive skin. In one older study, erythema was reduced by up to 27 percent after using lotion containing witch hazel (compared to 15 percent for lotions that didn’t contain witch hazel).

The tannins in witch hazel may be beneficial to the healing process because of their antioxidant, antibacterial, and antifungal properties. “As an astringent, it cleanses, and as an antiseptic, it kills microorganisms,” Patel says. Topical astringents also help to contract skin cells, which may help with wound healing, she adds. 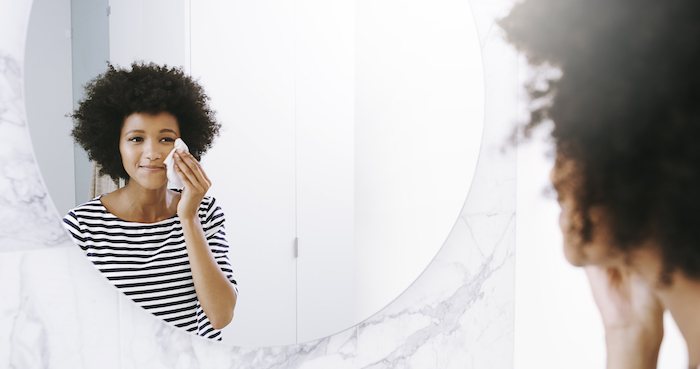 Harsh reality: We all lose some of the elasticity in our skin as we age, leading to some sagging. And no, witch hazel can’t reverse the aging process. As an astringent, however witch hazel tightens pores, which can the appearance of smoother skin. (The pore-shrinking effect may also help keep impurities out of your pores, which may help to reduce breakouts.) But, Patel notes, this effect is temporary.

Can Witch Hazel Get Rid of Bruises?

Bruising happens when you injure the blood vessels under your skin without breaking the skin itself. If witch hazel is applied quickly enough after injury, Patel says, it could help constrict the superficial vessels of the skin, which could reduce the size or appearance of a bruise (though if the bleeding is from deeper vessels, the witch hazel won’t be able to do much).