Why Do My Legs Shake During Barre?

You’re holding on to the back of a chair, positioned perfectly in a barre-style squat with heels raised and back straight, and then it begins. The shake. Maybe it’s slight at first, but the longer you hold, the more it becomes practically volcanic, starting in your thighs and extending down toward your calves. And so you wonder: “Why do my legs shake during barre? Is this normal? Or am I not strong enough yet?”

Not everybody has this reaction, but it’s common enough that you’ll see plenty of barre studios selling workout tank tops and T-shirts with sayings like “Wake & Shake,” “Embrace the Shake,” and “Eat, Sleep, Shake.”

Haven’t tried barre yet? Get started with Xtend Barre for free today!

Why You’re Shaking In Barre Class 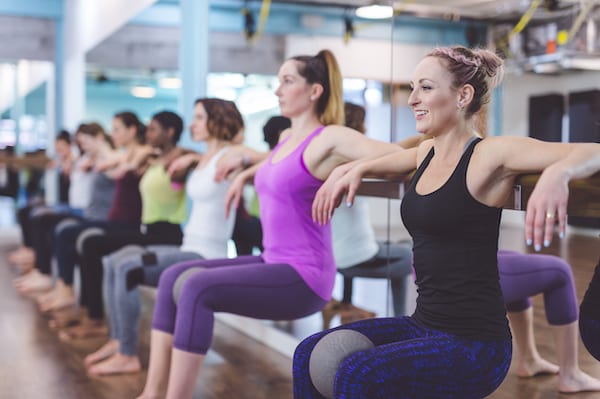 Any time you start a new type of workout program, you’re going to challenge your body in new ways, Rogers says. Even if you’re a seasoned triathlete or lift heavy weights at the gym most days, you’re going to come into barre class and experience a completely different feeling than you would with your usual training style.

When you work muscles in a new way, they react in a new way. In barre, you’re challenging your muscular endurance by holding contractions for longer than you’re likely accustomed.

As you become fatigued, motor units (i.e., the nerve and the muscle fibers it stimulates) within your working muscles begin to drop out of service. The more that happens, the less smooth and the more jerky the muscle contractions become.

Many people find that as they continue doing barre workouts, they shake less, because the muscles get conditioned to this response. But some people shake no matter what, and no matter how long they do barre.

Shaking during barre isn’t an indicator of your fitness level (or lack thereof).

What If You’re Not Shaking in Barre Class?

Because shaking is so common in barre, you might think that the more quake the better, which means that if your thighs are still, you’re not working hard enough.

But that’s not the case, Rogers says. A better gauge of how hard you’re working in Xtend Barre is to check in with your perception of how hard those next few reps feel.

“You want to get into the challenge zone, which is all about hitting the sweet spot,” she says. “You’re giving it your all but still staying safe and working within the range of motion that’s right for you. Get to the point where you feel like you can’t physically do one more rep. And then you do.”

Find out if you’re the shaky type — and get a powerhouse workout at the same time — by trying out Xtend Barre, which offers 30-minute, stream-at-home classes with no barre required (all you need is a sturdy chair or counter).

Xtend Barre starts with a foundation of dance and Pilates, but it also incorporates some fat-burning cardio movements. Rogers offers plenty of motivation and support to help you push through the burn while honoring where your body is right now.

This Is What Happens When a Man Tries Xtend Barre

In the interests of science I did the first week of Openfit's Xtend Barre classes, and am here to report ba...

Should You Do Xtend Barre if You Have Bad Knees?

While some types of exercise are off-limits when you have “bad knees," Xtend Barre is a low-impact progra...

Barre is a great exercise for people who may be looking for a less intense exercise while still allowing yo...

Xtend Barre is a 30-minute cardio mix of Pilates and ballet barre proven to sculpt a lean, strong physique....

Raising the Barre: Get to Know Andrea Rogers, Creator of Xtend Barre

Openfit — Healthy Living Made Simple for Everyone

Openfit is the all-in-one destination for fitness, nutrition and wellness. Our streaming platform now inclu...

How to Get the Started With Openfit Live

With Openfit Live, you can choose a workout from one of the 350+ weekly group fitness classes and enjoy the...