Why Do Muscles Get Sore After Exercise?

No pain, no gain is just plain wrong when it comes to your workouts and exercise-based muscle soreness — you can still build muscle without those tell-tale aches and lingering discomfort. So, why do muscles get sore for days after a vigorous routine?

What’s really going on when your muscles are sore after a workout?

Truth is, researchers aren’t totally sure. What they do know: Intense exercise can cause micro-tears in muscle tissue, explains Robert Gallo, M.D., orthopedic sports medicine specialist at Penn State Health Milton S. Hershey Medical Center. That’s nothing to worry about — it’s a normal part of training. But your body doesn’t just repair the damage; it remodels your muscles into larger, stronger version of themselves so that they can better handle the stress of working out next time.

“Exercise-induced soreness is caused by those micro-tears in muscle, and likely also by inflammation, which is part of the repair process,” says Trevor Thieme, C.S.C.S., and Openfit’s senior manager of fitness and nutrition content.

Not so! For a long time, scientists believed the accumulation of lactic acid and other cellular waste products from this damage is what caused muscle soreness — but these theories have largely fallen out of favor, Gallo adds. While your body does produce a substance called lactate, it’s cleared from muscles within 90 minutes after you finish a workout.

Many studies suggest it’s really muscle damage that stimulates pain receptors, which may be causing the soreness. In fact, one paper from the National Strength and Conditioning Association explains that the damage to your muscle fibers activates edema, a process where an excess of fluid collects in muscle tissues. This puts more pressure on the muscle fibers, further sensitizing nerve cells.

One  process is called exercise-induced muscle damage (EIMD), and a manifestation of it this is commonly called Delayed Onset Muscle Soreness (DOMS) which most exercisers become very familiar with at some point, according to the ACSM. Additional studies performed at the University of Brazil claim DOMS typically develops 12-24 hours after a hard workout, peaking 24 hours after training and often lingering 48 hours after. 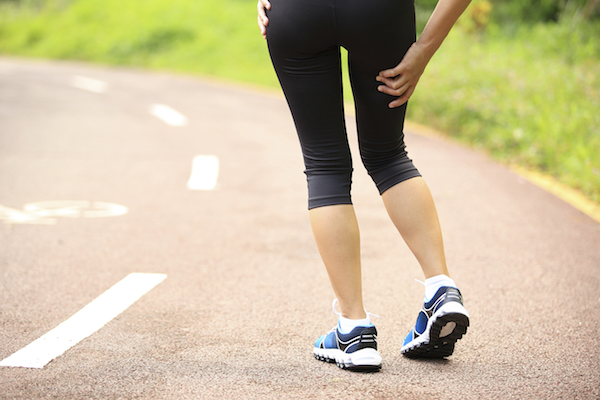 Most Common Symptoms of DOMS Can Include:

Interestingly, common muscle aches are the same for men and women, children and adults. What does directly affect how sore you are is the intensity and the variability of your activity, and how acclimated you are to the routine, plus your fitness level in general, Gallo says.

Since your muscles adapt to the force of a specific workout over time, what starts as DOMS will likely turn into regular, manageable muscle soreness from exercise after a few weeks, and not compromise athletic performance at all. “The reason you’re sore after a workout is because you’ve done something different, and you’ve done it intensely,” says Thieme. “That’s why you can bench press for months, and then suddenly feel sore in your chest after adding the dumbbell fly or a new pushup variation to your regular routine.”

When You Start Adapting to a New Workout, Exercise Soreness Decreases

Sports scientists say the more accustomed your muscles are to certain moves, the less damage may be done to muscle fibers and less soreness will ensue. According to a clinical paper from The American College of Sports Medicine, any time your muscles are adapting to a new, vigorous workout or hardcore weight-training routine, you may start off feeling mighty sore. This might indicate your need to take a day off or cross-train with dancing, walking or a less challenging workout.

Remember, a little exercise soreness is fine as long as it’s minor and temporary, says Thieme. When your muscle soreness becomes chronic —lasting more than a few days, for instance — or if the discomfort is particularly severe, it can be a sign of overtraining — and the need to see your health practitioner.