These days, emphasis is placed on how advanced our workouts have become, and for good reason. Never before has exercise been more efficient and specialized than it is today. We know more about the human body than ever before and know how to specifically target muscle groups to get the best results. Heck, you can even get ripped in 25 minutes a day.

To see just how far we’ve come, why not take a look back at some of the exercise routines, fitness icons, and exercise equipment that were popular around 100 years ago. More than anything, it’s great to see where some of the most known exercises of today originated from and which ones failed to make the cut.

Weight Loss Systems
As you can see from this 1930s video, these weight loss devices were very peculiar. Who knew you could lose weight while working out in heels?

Wooden Treadmills
There could be some debate that the treadmill is modeled off this 19th Century torture device (the treadwheel). The treadmill was also used to churn butter on the farm and was powered by the likes of a goat or dog. In fact this treadmill from 1885 somewhat resembles the design of modern-day treadmills.

By the 1920s, the treadmill (leg powered) was being touted as a viable way to lose weight. Though, judging from the patent, it would be hard for anyone to be able to use it or want to.

“Exercising Apparatus”
Here is a patent from 1912 for a new exercising apparatus. Though the patent might seem mundane, it does convey what was considered new exercise technology. It was even billed as a portable way to get your crushing power up to speed. Below is a photo of the device and how one might use it (courtesy of the U.S. Patent Office). 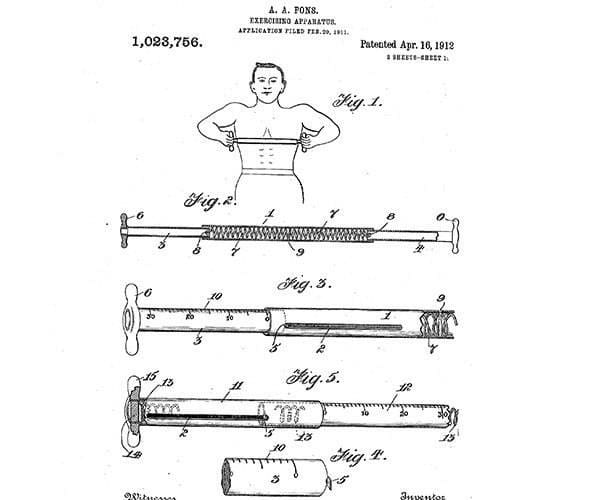 Slimming Exercises
Billed as easy ways to slim down, this video features very easy moves you can do to keep the weight off. Could this be one of the first home workout videos? This just shows how far we’ve come in 80 years.

Group Swimming
Beginning in the late 19th Century, the YMCA in Brooklyn introduced pools for public use. The idea soon spread across the country to other YMCAs, but there was one problem; many people didn’t know how to swim. It wasn’t until young Canadian, George Corsan, came up with the group method to teach swimming, that drowning declined across the U.S. It’s safe to say these classes are still used today (luckily water filtration and overall pool design has improved immensely, as evidenced by this photo from 1911 of a swimming pool).

J.P. Müller’s My System
It seems short exercise routines aren’t all that new. In 1904, J.P. Müller wrote the book My System: 15 Minutes’ Work a Day For Health’s Sake. He designed the book so people could go from “weakly” to having “health and beauty,” in six weeks.

The book serves as a starting point and includes such pre-workout information as what to wear during exercise, why you should have great dental care, and even to get 8 hours of sleep each night. Müller also includes how infants, older children, ‘old people’, office workers, and others can utilize his exercise approach.

Within the book are 18 exercises that are designed to get your body into amazing shape. Here is an example of the one of the exercises found on www.learntomuller.com. Apparently, rubbing your neck was a great way to get in shape. 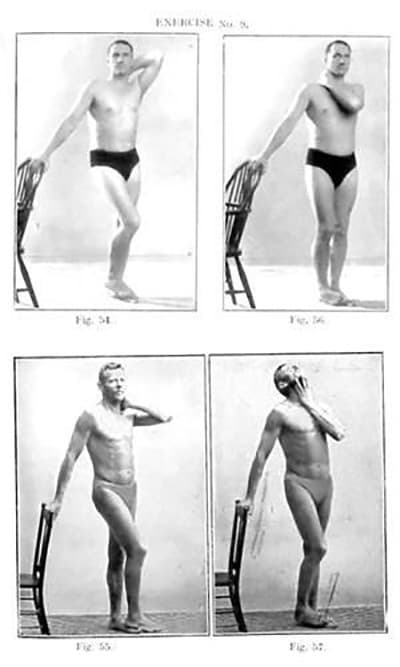 “The New Gymnastics” Movement
Dr. Dio Lewis was responsible for introducing this movement into the U.S. all the way back in 1860. It’s a far stretch into the past, but in a book from the U.S. Congress from 1903, Dr. Lewis was mentioned as one of the reasons why gyms had become popular (and why his techniques still survived).

The main reason why Dr. Lewis is included on the list is due to the “unique” exercises he proposed in his 1862 essay (The Atlantic has the original version on their site). He might even have been the first person to incorporate music with exercise. At one point in his article he suggests using a “bass drum” to provide music for those working out. Dr. Lewis theorized that with the right beat, people will be able to lift three times the amount of weight (so he could be the first to introduce music to the gym setting, just minus the speakers and variety).

Below you can see one of his recommended exercises from the article and it takes workout buddy to a whole new level. 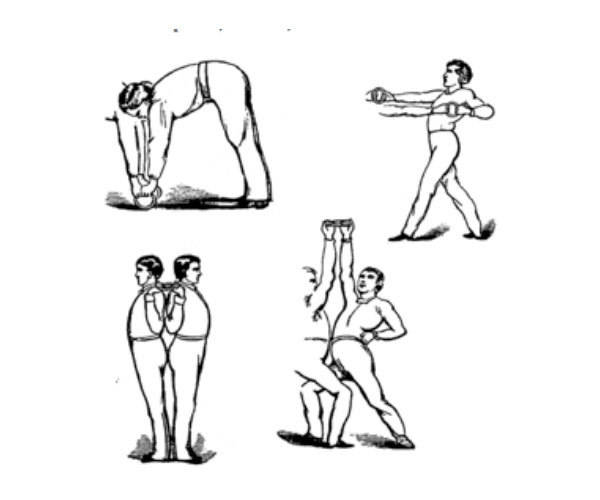 Hoover-Ball
Yes, as in former U.S. President Herbert Hoover. This game, designed in 1928 to give President Hoover exercise, was billed as part tennis, part volleyball, and part medicine ball. The object was to throw a 6-pound medicine ball over a volleyball net. Players would score points if the opposing team failed to catch the ball, couldn’t get it over the net, or if the ball went out of bounds.

The people who played described the game as more strenuous than any other sport at the time and said the game worked every muscle of the body. It makes you wonder why this sport didn’t continue? Perhaps medicine balls were more of a novelty and since then people realized it wasn’t much fun tossing a weighted ball over a net (though it does sound like an incredible workout). Still, video from 1915 shows just how captivating a medicine ball can be.

The Great Gama Diet and Exercise Routine
Ghulam Muhammad was born in 1882 where he would rise to be the World Wrestling Champion in 1910 (there is some debate as to whether he was the outright World Champion) and eventually assume the name of The Great Gama. Standing at only 5’7”, he rose to fame after defeating an opponent a foot taller than himself and supposedly lifting a 1,200-pound boulder over his head[1].

Possibly even more impressive than his competitions, was the rigorous training and dieting he put himself through. On a daily basis, Gamma was said to complete 3,000 Hindu Squats, 1,500 jackknife push-ups, and run a mile with a 120 pounds of stone on his body. He was also said to consume over 5 gallons of milk, large quantities of butter, and almost 9 pounds of fruit (could this be a version of the Paleo diet?)[2].

Could You Pass the FBI Fitness Test?

Ever wonder what it takes physically to be an FBI agent? The FBI requires all current and prospective agent...