Could RAGE Be Your New Key to Weight Loss?

For decades, you’ve heard that weight loss is a simple matter of calories in and calories out. Burn more than you consume — through a smart approach to diet and exercise — and you’ll lose weight.

Lifelong dieters have long suspected there must be more to this simple equation. For them, extra pounds are like unwanted guests, skulking around midsections no matter how hard they exercise or how scrupulously they diet.

Researchers are looking to adaptive thermogenesis — your body’s maddening tendency to turn your body heat up or down in response to behavior and circumstances, which can throw your metabolism off. But until now, they haven’t known how or why this takes place.

One possible reason, according to some interesting new research, is RAGE.

No, not the frustration you feel when you step on the scale. Rather, it’s a protein called RAGE, or the Receptor for Advanced Glycation End-products. This molecule, originally thought to affect only obese, elderly, or diabetic people, lives on the surface of fat cells. When it’s active, the study suggests, it effectively locks the gate on those cells — making them virtually invulnerable to your diet-and-exercise efforts.

Why Some Mice Don’t Get Fat (And Others Do) 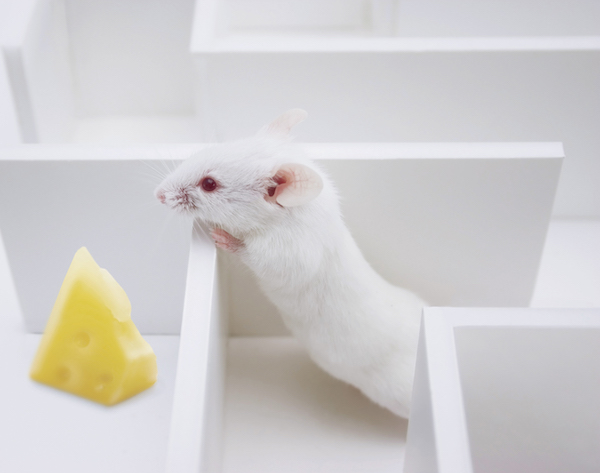 The latest findings, spearheaded by Dr. Ann Marie Schmidt, and Dr. Ivan Young Professor of Endocrinology at the NYU School of Medicine, are based on a series of studies on the effects of the RAGE protein on mouse metabolisms.

In one experiment in the study, researchers took two groups of the rodents — one with active RAGE, another whose RAGE pathway had been deleted — and subjected them to twelve weeks of life as a couch-potato mouse: plenty to eat, not much exercise.

At the end of the study, the mice with active RAGE gained 70% more weight than their RAGE-free counterparts.

In a second experiment, researchers transplanted a small portion of RAGE-less fat cells to normal mice — who subsequently gained less weight when overeating and under-exercising than mice with active RAGE.

The researchers’ conclusion was that RAGE puts the brakes on mouse metabolisms: With RAGE active, the mice couldn’t expend calories, but with the RAGE-brakes off, their energy expenditure skyrocketed.

If further research reveals that this is also true in humans, that’s a pretty big deal, says Dr. Jade Teta, an expert on metabolism, exercise and fat loss. “Adaptive thermogenesis is the biggest hurdle to losing weight, and more importantly, to keeping it off,” he says. “The discovery of a receptor that may be controlling the cells’ metabolic rate is a potentially huge discovery for circumventing adaptive thermogenesis.”

One thing seems clear: RAGE is active in humans under certain circumstances. The burning question: What good is a protein that may make the burning of fat — a vital and powerful energy source — virtually impossible?

The answer, it appears, lies in ancient history. Long before the days of Cheez Doodles and Shake Shack, starvation was a daily existential threat to humans. In this uncertain environment, a failsafe that slowed metabolism in times of deprivation made perfect sense.

In the twenty-first century, our food environment has done a 180, but our genetics remain largely unchanged. So when we curb calories too much, our ancient physiology still believes we’re starving. In response, RAGE slams on the metabolic brakes, and weight loss becomes all but impossible.

As an anti-starvation mechanism, RAGE makes great sense: it kept humans alive, while its long-term effects—obesity and its many health consequences—wouldn’t have showed up during a prehistoric human’s relatively brief lifespan. But now that many of us live much longer, those far-off problems eventually become a clear and present danger to our health.

There’s a further glitch in the fat-sparing protein’s programming. Schmidt and her team discovered a number of triggers for RAGE, including panic, stress, cold, and, ironically, overeating. “[RAGE] sees cellular stress created by overeating as similar to stress created by starvation — and puts the brakes on our ability to burn fat.”

Filling in the Metabolic Puzzle

Although Schmidt’s research on RAGE is new — and has yet to be replicated in humans — these early studies have many implications in the war against our ever-expanding waistlines.

They offer a possible explanation for why some people lose weight easily while others struggle. They suggest that stress and poor sleep are major players in the fight against weight gain. They indicate that “starvation mode” — in which you’re dieting as hard as you can but can’t lose weight — is more than broscience.

Finally, they offer a strong repudiation of the simplistic calories-in, calories-out formula: If RAGE is active, you’ll struggle to lose weight no matter how much exercise you get, or how few calories you consume. While frustrating, this fact may come as a relief to people who have long believed that their inability to lose weight must be due to a personal failing.

More relief may well be on the way. The mice with deleted RAGE showed no signs of cognitive or reproductive impairment, suggesting that side effects to turning the protein off may be limited. And their benefits may extend even further: Schmidt told Science Daily that RAGE is implicated in inflammation linked to cancer and Alzheimer’s. If science can divine a way to safely deactivate it in humans, it may provide relief from some of our most devastating diseases.

Again: all this is speculative. Says exercise physiologist and metabolism expert Dr. Mike T. Nelson, author of The Flex Diet, “Over the years I’ve seen people get really excited about animal studies. They think they’ve discovered the key to obesity, only to find out that the mechanism they’re studying is entirely different in humans.”

So even though Schmidt’s findings are promising, we shouldn’t start chowing pizza and guzzling beer in the belief that we’ll be able to undo the damage with a syringe full of RAGE-free fat in a year or two.

Something the research does support: smart eating—not too much, not too little — and to a smart approach to exercise. Says Teta, “Some of the things we can do to reduce metabolic slowdown are to maintain muscle mass through weight training, elevate protein intake to suppress hunger, and increase our daily movement habits.”

Tomorrow’s scientific breakthroughs may be fun to contemplate, but you can take those tips to the bank today.