Vinyasa Yoga: All You Need to Know to Get Started

You’ve likely heard that yoga can help you burn calories, build strength, sculpt your body, and relieve stress. If so, chances are you’ve also heard about the discipline within it called vinyasa yoga.

The terms “yoga vinyasa,” “vinyasa yoga,” “vinyasa flow,” or “flow yoga” are all essentially synonyms for one method that can help you achieve your fitness goals among many other mindfulness benefits. Let’s dive into the definition of the practice, its pillars, traditional poses and sequences, as well as benefits and precautions.

What Is Vinyasa Yoga?

Vinyasa yoga is a form of yoga that sequences poses in a fluid, continuous way, assigning an inhale or exhale to each movement of the body. Traditionally, vinyasa means “linking breath to movement.”

The priority placed on continuous movement in vinyasa yoga distinguishes it from other styles like the more restorative yin yoga, which emphasizes long, static holds in a single posture. The steady and easeful breath characteristic of vinyasa yoga is intended to create a state of effortlessness, or flow, which is meant to slow fluctuations of the mind in what is designed as a moving meditation.

Vinyasa is used to describe an array of methods and modalities. Some argue that “set sequence” methods of yoga like Mysore ashtanga, Bikram, or power yoga aren’t vinyasa. Others disagree, noting that these are step-by-step sequences that emphasize the breath, which is characteristic of vinyasa yoga.

In vinyasa yoga, you flow from one posture to the next as a way of focusing your energy on your breath, ideally abandoning your conscious mind and tapping into subconscious patterns, emotions, and habits. This has resulted in, for many, a transformation of the mind to match that of the body.

The practice isn’t about getting a particular pose “right” — as it is in, say, hatha yoga — so much as it is about the flow between poses. Subsequently, vinyasa yoga is also about learning how to surrender, to find steadiness, ease, and pleasure in your body and mind through the breath.

When you link breath and movement, you have the foundation for a vinyasa sequence. While that leaves plenty of room for creativity, there are a few vinyasa yoga poses that are sacred and unchanging.

Vinyasa can refer to a small subset of postures, like a mini sequence, or it can describe a whole class. For example, among the various vinyasa yoga poses is the sun salutation, or surya namaskara sequence. Surya namaskara A and surya namaskara B are two hallmark vinyasa sequence subsets found in almost all vinyasa classes.

The surya namaskara A and B sequences are said to date back to the Vedic period as a means of worshipping the sun. These were practiced as a ritual to honor the life-giving energy, known as prana, that made crops and food grow. Surya means “sun” and namaskara means “to bow” or “honor.” 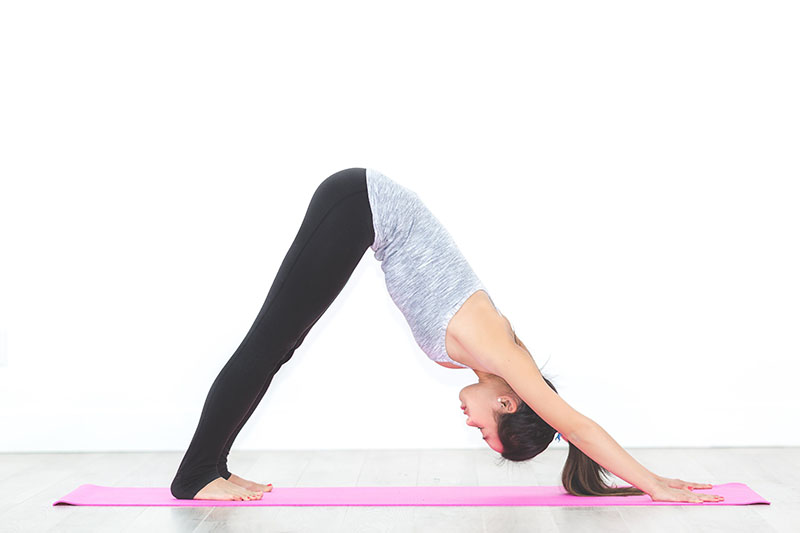 These sun salutations are considered moving prayers, using breath to direct the practitioner’s energy in specific ways. With each inhale, you create an upward movement while expanding your energy. With each exhale, you create a downward movement and surrender that energy. Surya namaskaras are considered a full practice because they contain backbends, forward bends, core work, and inversions.

There’s actually a common subset sequence that is itself referred to as a “vinyasa,” which involves the linking of three specific postures found in a sun salutation: chaturanga (chaturanga dandasana), upward facing dog (urdhva mukha svanasana), and downward facing dog (adho mukha svanasana). Combined, the three can stand on their own, or serve as a transitional sequence, often inserted between postures as a means to reset the spine, or clear the slate for the next set of sequences.

You might encounter some of the same poses in a vinyasa class that you’ve seen in others. But instead of standing on their own, these postures may be linked together based on foot position, orientation of the leg in the hip joint, shoulder rotation, or simply how well they flow together.

For example, you will typically find warrior II (virabhadrasana II) and triangle pose (uttitha trikonasana) linked together. The instruction will go something like this: After you take your “vinyasa,” step your right foot between your hands out of downward facing dog, and turn your back heel down; align your front heel with your back arch; and, keeping your right knee bent, rise on an inhale to warrior II.

You’ll notice that the front leg in warrior II is positioned externally in the hip joint. To move from this pose into triangle, you simply straighten your right leg, and hinge your pelvis and torso forward at the hip joint. There’s no need to move your feet, and the position of the leg is already externally rotated. This is easy on the hip joint, and explains why the two poses are linked.

Another set of poses that are commonly linked is the bridge (setu bhanda) into full backbend (urdhva dhanurasana). In this example, bridge is a preparatory pose, warming up the appropriate muscle groups for the deeper backbend. Again, the rotation of the leg in the hip joint is the same. You’re already stretching the muscles on the front of the body, like the hip flexors, to prepare for the deeper needs of the full backbend.

Vinyasa yoga offers most of the advantages of other forms of yoga, emphasizing some more than others.

Foremost among the physical benefits of any yoga practice is improved flexibility through the gentle lengthening of muscles. But in vinyasa yoga, practitioners engage more in “dynamic stretching” versus “static stretching,” the latter of which is more common in hatha yoga. Dynamic stretching utilizes a broader, more active range of motion to lengthen muscles rather than the gradual elongate-and-hold movement that’s characteristic of static stretching.

Through the use of bodyweight resistance, vinyasa yoga also provides a form of functional strength training. Demanding poses like arm balances and inversions help build relative strength, which enhances overall fitness and the performance of daily activities.

Vinyasa yoga can increase range of motion by combining better strength and flexibility with dynamic movement of the joints. For example, a yoga practitioner may not enjoy the full range of motion in a joint because of restrictions to movement in connective tissue and/or a lack of muscular strength to support it. But through a healthy yoga practice, they can learn body awareness, build strength, and limber up not only the muscle, but also tendons and ligaments that may be inhibiting movement.

Just about any form of strength training is going to be accompanied by enhanced musculature. During vinyasa yoga, practitioners perform advanced movements, building and shaping muscle with resistance provided by their own bodyweight.

When you build muscle you’re building more metabolically-active tissue, which inherently burns fat (among other energy sources) for maintenance, even at rest. Provided, of course, that you’re not offsetting the calories burned with an excess of calories consumed.

Yoga’s gentler forms may not propel your heart rate into the zones necessary to qualify as cardio, but more vigorous disciplines like vinyasa yoga can. A review of studies in 2014 found that asana- (pose-) based yoga can improve resting heart rate, along with a host of other cardiovascular data points. The faster and more intense your vinyasa practice, the more of a cardio workout it can be.

How many calories do you burn in vinyasa yoga?

While the amount of energy spent depends on a number of factors and can swing wildly from one person to the next, you can burn serious calories during a more vigorous, fast-paced vinyasa practice. A 165-pound woman can burn up to 653 calories during an hour of vinyasa yoga.

When working in these repetitive sequences, it’s important to practice with care, as with any physically demanding activity. Plenty of beginners get their starts in vinyasa-style classes, but it’s important when you’re first learning yoga to seek beginner instruction. The pace of a vinyasa class can be quite fast, and if you don’t know the names or basics of the poses, you could expose yourself to injury.