How to Lose Weight on a Vegan Diet

There are plenty of reasons to choose to eat a vegan diet — your health, the environment, a love of animals. But can you lose weight on a vegan diet?

Well, weight loss isn’t a given — vegan junk food is still junk food — but you can and will lose weight if you follow a few simple tips. Read on for more about about losing weight on a vegan diet, including a list of vegan dos and don’ts that you can implement starting today.

Can a Vegan Diet Help You Lose Weight?

In a 2015 study published in the journal Nutrition, a vegan diet proved better than even other meat-free plans for weight loss. A 2017 review published in the Journal of Geriatric Cardiology found that vegan diets “should be considered a viable option for the treatment and prevention of overweight and obesity.”

So yes, a vegan diet can help you lose weight. But it takes more than just replacing animal foods with plant-based ones.

“If done properly, a vegan diet can promote weight loss,” says Samantha Coogan, MS, RD, the director of the didactic program in nutrition and dietetics at the University of Nevada Las Vegas. But since foods like Oreos, French fries, soda, and chips are all vegan but not exactly healthy, she cautions, you “should stick more closely to whole foods and stay away from food products.”

If you’re living on candy and other high-calorie, low-nutrient vegan junk food, “don’t be surprised when you’ve still got that belly fat, lack of energy, and disturbed sleep patterns,” Coogan says.

If you instead eat a comparable amount of calories from nuts, seeds, vegetables, whole grains, fermented foods, healthy oils, and complementary proteins, says Coogan, you get so much more food. “Plus you gain all kinds of health benefits,” she says, “such as fiber, antioxidants, electrolytes, and phytochemicals.”

What to Do to Lose Weight on a Vegan Diet

Keep these vegan weight-loss tips in mind when you plan your meals and fill your shopping cart (and especially when you fill your plate!):

“Everyone needs to monitor portion sizes,” says Natalie Allen, MS, RD, and an instructor of biomedical sciences at Missouri State University. “Too much of a good thing is still too much. Portions are hard to understand, as Americans typically eat more than is recommended.”

Load up on fruits and vegetables — with few calories, they “are always good for weight loss,” adds Allen, but pay special attention to your portion sizes of dense nuts and seeds. “While they are high in nutrition and protein, they are also high in calories,” she warns.

2. Make Sure You’re Getting Enough Protein

“Protein helps to maintain muscle mass, even as you lose weight,” explains Allen. “It also provides a feeling of fullness, so it is crucial in helping limit calories.” On a vegan diet, you need to be mindful of consuming enough protein, since most plant-based sources are not complete proteins.

To make up for that, Coogan says “you need to consume more — bigger portions or increased frequency — of the plant-based proteins to digest and absorb viable amounts of nutrients.” She likes the combos of quinoa (a complete plant-based protein), red beans and rice, and whole-grain bread and nut butter. (Of course, she’s not saying calories don’t matter—just that you might need a higher percentage of protein sources on your plate than you might think.)

And don’t eat the same tofu, tempeh, and beans day in and day out. “Try to mix up your protein sources by using other types of protein, such as pea protein, brown rice protein, or hemp protein,” adds Coogan.

3. Don’t Drink Too Many of Your Calories

Anytime you’re trying to lose weight, you want to avoid drinking your calories — skip the pumpkin spice lattes (yes, they can be made vegan) and the sodas.

Coogan suggests sipping on coconut water (for electrolytes), kombucha (for probiotics), herbal teas (for antioxidants and phytochemicals), or nut/oat milks (for protein, vitamins, and minerals) to get in some “extra nutrients that you may be lacking from food.”

And of course, drink plenty of water.

4. Stay Away From Vegan Junk Food

When it comes to shedding pounds, the best vegan weight-loss tip is to avoid junk food. “Any empty-calorie, processed foods should be limited,” advises Allen. (But, she adds, the occasional cookie or piece of chocolate “will not wreck your diet.”)

The goal, agrees Coogan, is “to eat as many whole foods — not food products — as you can in order to support optimal metabolic processing and reach those weight-loss goals.” How can you tell the difference? “Look at that ingredient list! If you see more than four or five ingredients, be wary,” she cautions. “This is also a good way to make sure that the foods you consume are truly vegan.”

Instead of processed vegan “meat” substitutes, Coogan likes whole food-based alternatives “to increase the bulk or volume of food while also lending to its texture, such as mushrooms, seitan, cauliflower, eggplant, or jackfruit (yes, it’s a fruit, but has meaty flesh that is a nice substitute).”

A good rule of thumb for losing weight: Don’t go too long between meals. When you’re first getting used to a vegan diet for weight loss, you might notice a difference in your hunger levels.

To stay fuller longer, choose foods that promote satiety. (Think: fiber, protein, and volume!) Allen recommends including beans and other legumes in your meals, “as the fiber and protein will help provide a feeling of fullness.” Here’s a vegan weight-loss meal plan. 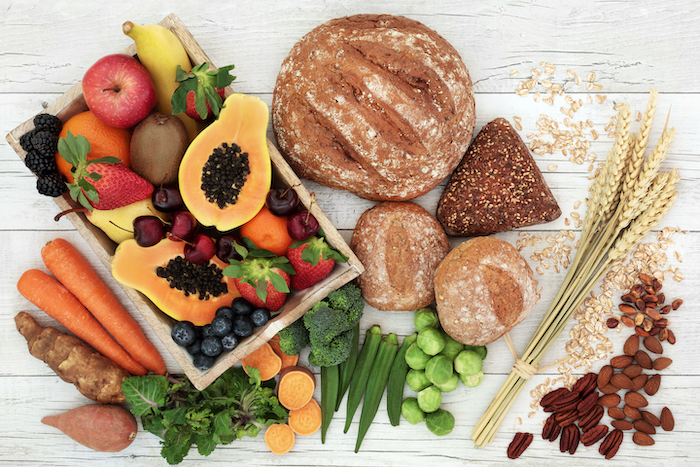 Should I Worry About Eating Carbs on a Vegan Diet?

“Most vegan meals will be carb-heavy,” says Coogan. (Say what you will about meat and cheese, but they’re not carbs.) She offers these vegan weight-loss tips to balance your carb intake.

1. Never Have a Carb by Itself

“Doing so will cause your blood sugar to drastically spike and dip, causing a sudden crash pretty quickly after consumption.”

2. Pair Carbs With a Fat or Protein

“This will slow down the digestion of carbohydrates, helping to level off blood sugar more steadily.” So sure, snack on an apple, but pair it with a handful of almonds or 2 tablespoons of nut butter.

3. Incorporate Protein Into Every Meal or Snack

“Protein will lend to greater satiety than carb-rich foods,” she says.

One good substitution to consider working in now and then: cauliflower rice. Or if you’re sticking with rice, try cutting the portion in half and adding more vegetables.

5. Learn to Balance Your Plate

Using the MyPlate method, a balanced vegan plate might include: 1/2 plate of veggies/fruit; 1/4 plate mixed nuts, seeds, and whole grains; 1/4 plate quinoa with red or black beans or seitan (or cauliflower rice with beans, seitan, and mushrooms); and an 8-ounce glass of unsweetened almond, coconut, or oat milk.

Stepfanie Romine is a yoga teacher (RYT 500), ACE-certified health coach and fitness nutrition specialist who writes about natural health, plant-based cooking and yoga. A runner and hiker based in Asheville, N.C., her books include The No Meat Athlete Cookbook and Cooking with Healing Mushrooms. Follow her on Twitter.

Take a look at this list of X common mistakes and see if you’re also making them, as well as how you can ...

Here’s an Important Question: Does Coffee Have Carbs?

If you’re on a low carb or keto diet, find out if there are any carbs in the type of coffee you drink and...

Kick Sugar to the Curb with Sugar Free 3 from Openfit!

Sugar Free 3 is a simple 3-week eating plan designed to help you kick your sugar habit, crush your cravings...

Is Barre A Good Way To Lose Weight?

Barre workouts focus on strengthening and lengthening the body, but can a barre workout help you lose weigh...