What are the Benefits of Turmeric and Black Pepper?

Turmeric has been used to add flavor, natural coloring, and a healthy boost to foods for thousands of years. More recently, the golden spice has gained a reputation as a “superfood” — a term for foods that offer impressive and impactful health benefits.

But to get the full health benefits of turmeric, you may need to combine it with its superfood sidekick, black pepper. When you put turmeric and black pepper together, you’ve got a pretty magical combo. Here’s how these two spices benefit one another — and you.

The Health Benefits of Turmeric

Turmeric, also known as Curcuma longa, is a plant in the ginger family. Traditionally used in Asian cuisine, the rhizome — or root — has been a staple in Ayurvedic practice.

Turmeric contains a chemical compound called curcumin. Even in small amounts, this polyphenol has been found to have some pretty substantial antioxidant effects — research suggests turmeric may help impact important body functions like weight management, joint health, and circulatory system health. Bioavailable curcumin may also help with exercise recovery and other health benefits.

The Health Benefits of Black Pepper

And it turns out black pepper can also boost the healthy effects of turmeric. 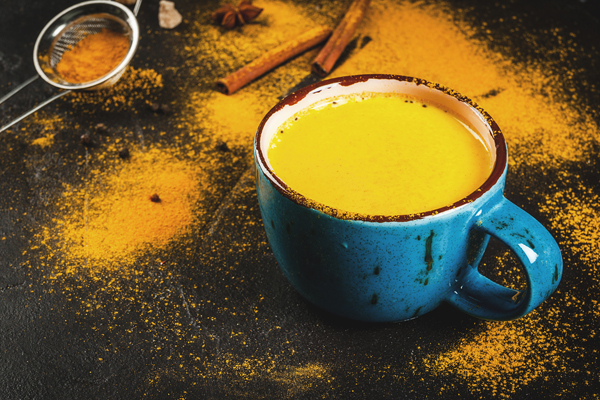 What Happens When You Combine Turmeric and Black Pepper?

On its own, turmeric has poor bioavailability, meaning our bodies don’t absorb and utilize it well — so some of those healthy benefits of turmeric may go to waste.

But by adding a pinch of black pepper to any turmeric-containing food or drink, you can help dramatically enhance the health benefits of curcumin. Research has shown that combining piperine with curcumin increased the bioavailability of curcumin by 2000 percent.

“They’re a powerful duo because they’re both antioxidants that work in tandem,” says Cameron Fiorenza, BS-NDTR, and Culinary and Nutrition Specialist at Openfit. Piperine helps increase the absorption of curcumin, which means combining the two spices helps allow curcumin to circulate in the body for a longer period of time. “This may lead to increased effects of curcumin,” Fiorenza adds.

For optimal benefits, Fiorenza recommends a 20-to-1 ratio of turmeric to pepper. “This is a very small amount of black pepper per turmeric,” he says. “Not very much is needed to activate the combined benefits of piperine and curcumin.”

For instance, most turmeric latte recipes call for just a pinch of black pepper to enhance about one tablespoon of turmeric — so you don’t have to worry that adding black pepper will make your favorite recipes too a spicy to enjoy.

Are There Any Risks to Using Turmeric and Black Pepper?

The short answer? No. Both turmeric and black pepper have been approved by the Food and Drug Administration (FDA) as Generally Recognized as Safe (GRAS).

Even at very high amounts — in the neighborhood of 6,000 or more milligrams a day — a clinical trial found no serious risks associated with curcumin. Some subjects reported unpleasant side effects such as diarrhea, rash, headaches, and nausea — but those were linked to higher dosages than you’d typically find in a turmeric latte or shrimp coconut curry.

And black pepper is considered safe — although it can affect the absorption of some drugs, so it’s important to talk to your doctor if you’re taking any medications.

Of course, this doesn’t mean you should eat as much turmeric and black pepper as possible. “You won’t increase benefits by consuming tablespoon after tablespoon of either food,” Fiorenza says. “Even though there’s no documented overdose or maximum tolerable intake for turmeric or black pepper, just like with any food, these should be consumed in moderation.”

If turmeric is a new addition to your spice rack, you may want to start slowly — but if you find turmeric agrees with you, go ahead and add it to your curries, stir fry dishes, scrambled eggs, roasted vegetables, and even smoothies. Just remember to add a pinch of black pepper, and you’ll be good as gold.

After graduating from Syracuse where Nicole studied magazine journalism and nutrition, she moved to New York City to write for the health and fitness site Greatist. She currently edits full time for Ghergich & Co. Nicole's work has appeared on TIME Healthland, Shape, USA Today, Men's Fitness, The Huffington Post, Refinery29 and Lifehacker, among others. Follow her on LinkedIn.

Are White Claws and Other Hard Seltzers Actually Healthy?

Hard seltzers are having a moment, and many people think drinking them is better for you. So we're answerin...

7 Ways to Stick to Your Nutritional Goals When Traveling

Traveling doesn't have to mean throwing your nutrition and health goals out the window. This is how to stic...

Is Konjac Jelly Really the Secret Sauce to Weight Loss?

Konjac is a root vegetable that gets used in multiple consumer products. Here’s what you need to know abo...