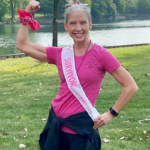 When Gretchen B. was diagnosed with breast cancer in March 2021, her doctor hinted that her path toward remission may have been very different if her consistent workouts weren’t part of her life.

“She told me because I’d lost weight and gotten more muscle tone due to all the exercise I was doing, that could have been a major factor for why I was able to feel a lump,” Gretchen recalls. “I was already happy that I’d been doing Openfit up until that point, but that made me even more grateful that I’d started.”

Throughout her diagnosis, surgery, treatment, and remission, Gretchen shared her story on the Openfit Teammates Facebook group. She often praised the way her favorite class — Xtend Barre with Andrea Rogers — kept her strong through a process that was physically draining and helped her maintain her emotional health as well.

“Andrea always says to think about why you ‘pressed play’ today, and that had meaning for me before I was diagnosed,” Gretchen says. “But that meaning was even deeper while I was going through chemo. No matter what was happening, I chose to press play almost every day. And that made a huge difference.”

Learn more about Gretchen’s fitness journey and and how it crossed paths with her road to recovery. 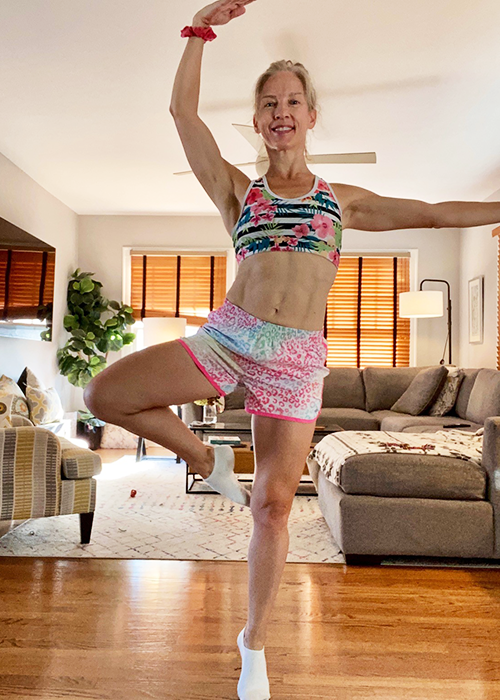 Gretchen’s journey started in late 2019 when, at age 44, she got an Apple Watch for Christmas. Although she’d always been moderately fit, she found out that she only walked about 1,000 steps per day and didn’t stand up much during her office work.

That was a catalyst for joining a local fitness center and taking a barre class, which she ended up loving. But then COVID hit — and, like many people, she began shopping around for at-home workout alternatives.

She signed up for free trials with various fitness apps, including a two-week trial of Xtend Barre classes. After the trial was over, she kept changing up her apps — but nothing felt as empowering and motivational, and she found herself missing Andrea’s energy.

“She’s so enthusiastic, and I really just heard her in my head,” Gretchen says. “I signed up with Openfit and really fell in love with the Xtend Barre classes.”

Taking classes almost every day transformed her body, giving her muscle definition and helping her feel stronger. And that led to healthier eating habits, she says, because her whole attitude toward herself changed toward wanting to keep those positive post-barre vibes resonating throughout the day.

Then, while getting ready for a holiday party at the end of 2020, she felt a lump in her breast. The whirl of tests and the diagnosis that followed were overwhelming, but Gretchen actually felt more confident than expected about the road ahead.

“Because of the changes I’d made, I was physically and mentally in the best shape of my life,” she says. “That felt like, without even knowing it, I was putting myself in the best possible position to go through this experience.”

After surgery, and even through chemo, Gretchen never questioned whether she’d press play. At that point, Xtend was such a habit that it felt weird when she skipped a day.

Because she struggled with fatigue from her chemo treatments, she sometimes took the class for only 15 minutes, and she mostly followed the modifications. But she still showed up.

Support When It Mattered Most 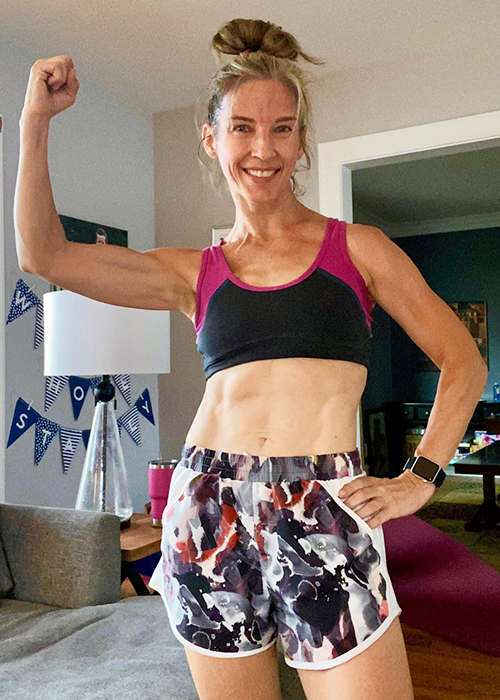 On days when the exhaustion was too much, she started taking Every Step walking classes, and fell in love with those, too.

“Those were so motivating, and it was great to feel part of a group,” she says. “It helped me to stay active and it made the walks go so fast.”

The Openfit Teammates Facebook group was another major source of support. Whenever she posted, Gretchen would get a flood of positive replies. One teammate even mailed her a “chemo support kit” filled with items like soft slippers and lotion.

“Cancer, in general, made me realize the world is full of amazing people and that you are never alone,” she says. “I have good friends and family, but I also consider my Openfit teammates part of my support. I’m so thankful to have found Openfit — I can’t imagine going through what I did without it.”

We caught up with Davanna to find out more about what made her grow to love indoor cycling and some myths t...