Rosa Took Over 1,000 Openfit Live Classes and Made Fitness a Habit 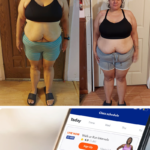 When Rosa Lozano positioned her phone in front of her sleeping husband by the pool and started dancing during an Openfit Live class one day, she was already a much-loved part of any session she joined.

A frequent commenter on the lively Openfit Teammates Facebook group, Rosa was celebrated for hitting a major milestone of 1,000 classes. Fellow group members appreciated that she could be funny but also vulnerable, sweet but also saucy. And it all started because — like pretty much everyone — she loves free stuff.

Around the middle of 2020, Rosa saw that two free months of Openfit was a perk from her mobile phone carrier. Lockdown had just started in Texas, where she lives. She was trying to figure out ways to keep from feeling bored at home, so she recruited her sister to take classes with her.

“She has scoliosis and Pilates has helped her in the past, so we thought we’d try something really easy to start, which was Andrea Rogers‘ Xtend Barre,” she recalls. “We laugh about it now because it was not easy at all. We were only able to do a couple moves and then we’d pause it and take a break. But we kept going.”

How Rosa Built a Habit 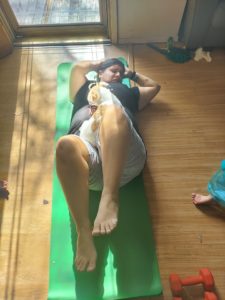 When the free trial expired, Rosa signed up. She started with the Every Step walking classes, then added Sugar Free 3 to tackle a sugar habit. After going three weeks without sugar thanks to the program, she found herself sleeping better and with consistent energy throughout the day. That led her to join more classes — and then she saw the badges.

“When I saw that I could earn badges, that was a huge motivator for me,” she says. “Those were like my little trophies. I couldn’t wait to collect them, and I still feel that way.”

Her two children, ages 4 and 5, know when an Every Step class is about to start — and they love to join in, she adds. Her daughter, who wants to be a ballerina, is eager to be part of Rogers’ classes and Rosa jokes that her daughter pushes her out of the way to be on camera. Not only has Openfit instilled a love for exercise in her kids, but Rosa has come to appreciate making it a habit as well.

In fact, she keeps a few exercise mats and 5-pound weights in her car so she can sneak in a class even when she’s not home, like doing yoga in a nearby park. In the morning, she jumps out of bed and into a class even though she’s only half awake, sometimes stacking up a couple classes to start the day.

“Before Openfit, I had signed up for a gym, but I was too intimidated to work out with the other people there,” she says. “I was too self-conscious because I thought I’d be the biggest person there. They had classes but I stuck to my little treadmill because I was too nervous to join. But with Openfit, everyone is so supportive. I take classes every day now, because I love working out and I love being with my friends.”

Those Habits Led to Results 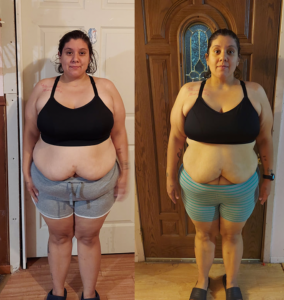 After more than a year of classes and challenges — and many, many badges along the way — Rosa feels stronger and more motivated than ever. When she began she could do “one good push-up” but now she can do 20.

Her sleep has improved tremendously, too. Before Openfit, she struggled with sleep nearly every night. Now, she sleeps through the night and has plenty of energy all day.

Most of all, she loves being part of a group, either during classes or in the Openfit Teammate’s Facebook. For example, when she told members of one of her barre sessions that she was working out beside the pool where her husband was snoozing, they encouraged her to “include him” and she did — by doing a little dance right next to him while he slept through the whole performance. He may not have appreciated it, but she did — and so did the group.

Rosa says even though she may not ever meet these friends in person, they’re a big part of making her feel good.

“I get so excited to see my squad,” she says. “The more classes I take, the more fun it is.”

7 Handy Openfit App Features You May Be Missing Out On

Here are 6 features of the Openfit platform that make it more of a workout buddy/accountability partner tha...

Stats Off to You! Here’s Our Openfit Year in Review

Our Openfit community set new records this year, and we're rounding them up. From miles walked to your favo...

Can’t Find What You’re Looking for on Openfit? Try These Simple Tips!

We answered our users' most-asked questions about the Openfit app, with tips for navigating classes, nutrit...