Fitter Than Ever Before, Teammate Paul and His "Hero Pose" Inspire Others 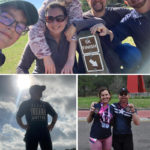 If you browse through the Openfit Teammates Facebook community, you may see members posting photos of themselves doing Paul Embry’s “hero pose.” But what’s unique is that Paul is not an Openfit trainer, he’s a teammate — one whose accomplishments and positive attitude inspire others. 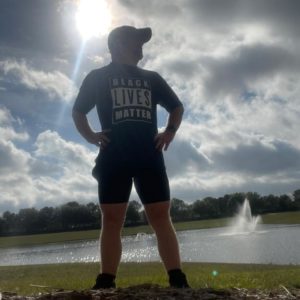 Paul wasn’t always active. He began his fitness journey about seven years ago when, at age 40, a check-up at the doctor revealed he had early-onset osteoporosis. Since he carried 175 pounds on his 5’4″ frame, the doctor recommended that Paul lose weight to improve his overall health. So he got a fitness tracker and began walking and exploring fitness apps.

“I want to be healthy for my wife and daughter,” he says.

Walking led to running, which led to more advanced apps. But none felt quite right. For example, the trainers on one posted photoshopped images of themselves, which turned Paul off. Another app was always pushing.

“Their entire focus was running,” he says. “They didn’t say anything about why rest days, strength training, or flexibility is important.”

When that community felt like a bad fit for him, he sought out other apps. That’s how he landed at Openfit.

Find a huge selection of workouts — from strength training to barre to Pilates — on Openfit Live. Try it here for free!

About a year ago, Paul started an Openfit trial because he liked the variety of classes offered. During those early sessions, “the trainers were open and friendly,” he says. “I felt accepted and comfortable turning my camera on. I liked that, because I didn’t know much about form. Having someone say, ‘You need to adjust this or that’ was good for me.”

“I learned that running too much can burn out your legs and your brain, and if you don’t balance that running, you’ll never improve,” he says.

That was his problem with other apps. “I was running into a wall where I couldn’t get any faster.” This time, however, Paul backed off his running and added some yoga and strength training. It worked! 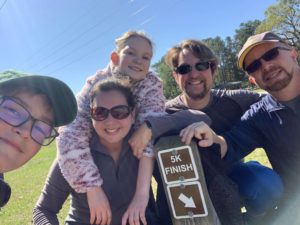 Beyond the fitness aspects, he appreciates that Openfit supports important causes. “When I found Openfit, they posted that they were donating to the Black Lives Matter movement,” Paul says. “Over time, they supported other social causes, like Pride month, throughout the year. I thought, ‘This I can get behind!'”

Slowing Down to Go Faster

Balancing out his running helped Paul complete his first marathon this past Valentine’s Day. Then in May 2021, he cut 45 seconds off his 5K personal record.

“I’m confident I can run a 5K, 10K, or marathon, and I’m no longer intimidated by others who say they can.” And, when speaking of the Openfit running community, Paul says, “Those runners that I was in awe of, they are my people now.” 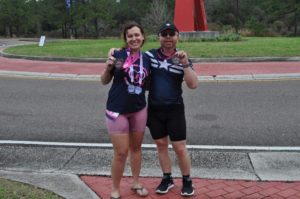 In addition to feeling more energetic, losing 30 pounds, and needing to buy a new wardrobe, he also improved his bone health thanks in part to a combination of weight loss and resistance training.

“It’s pretty amazing,” he says. “My whole life has changed for the better.” At a recent check-up, his doctor agreed that Paul is in the best shape of his life.

Paul attributes his success partly to the Openfit community. “It’s very supportive, positive, and uplifting,” he says. “People share personal bests and non-scale victories, and they suggest things to try to newcomers. I want to be part of that.”

He once shared how to do the lighthearted “hero pose” he learned at a Renaissance festival more than 10 years ago.

Now, other community members will sometimes post their best hero pose. “I feel like I’m inspiring people to be better and maybe push themselves a little bit, and that feels good,” he says.