How 4 Weeks of Focus Helped Lo Overhaul Her Life

At the end of 2020, Lo Robinson moved cities for work and moved in with her sister in Houston while she got settled. She loved being around her very active nieces and nephews, but she wasn’t unable to keep up with them. Having spent most of her life being heavier and not very active, Robinson had tried for the last five years to lose weight.

“But I never had the ‘want’ to keep it off,” she says. “I let traumatic things in life be the reason I gained the weight back.” Chasing after the kids, she says she realized, “I’m not going to have a long life if I don’t put myself first.”

Further cementing this desire to become healthy, she stepped on a scale on January 3, 2021, and discovered she was the heaviest she’s ever been. “I thought, ‘Good Lord, you let yourself get to almost 400 pounds,'” she says. “That’s not healthy.”

Robinson had tried to lose weight after losing her brother to heart disease a few years ago. But, “I was doing it for my family,” Robinson says. “This year, I knew I had to do it for me. In order to be my best self for others, I had to take care of me.”

Whether you’re looking to lose weight or just get stronger, feel like your best self with 4 Weeks of Focus! Try it here for free. 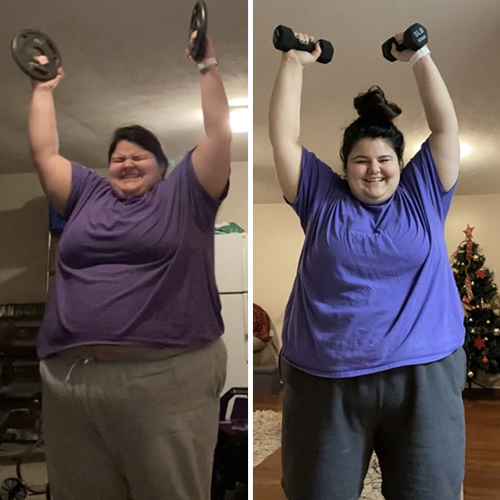 Serendipitously, around the same time, she saw actress Shay Mitchell post on Instagram about a fitness program she was doing with Openfit called 4 Weeks of Focus.

“I’ve been a huge huge fan of hers since Pretty Little Liars came out,” Robinson says. “Any time she marketed something, I wanted to do it. She is a huge inspiration to me.”

Robinson liked that 4 Weeks of Focus requires minimal equipment — just two sets of dumbbells. She also checked out the Instagram of trainer Kelsey Heenan, who leads the program.

“She made me feel like I was in the right place,” Robinson says. “Picture-perfect trainers are not for me. But with Openfit and Kelsey, I felt welcome. Even though I was the biggest person in class, I could keep up.”

When 4 Weeks of Focus kicked off on January 11, “it was hard,” Robinson says. However, Kelsey always demonstrated modifications for every move, so Robinson felt confident going at her own pace. And when there were moves she couldn’t do, she followed Kelsey’s suggestion to run in place or do active recovery.

“Even if class is kicking my butt, there are different things I can do to keep going,” she says, so she was never tempted to lose hope and give up.

Robinson also joined the Facebook group and immediately felt part of a community. “I never felt judged. We became a really big group of friends,” says Robinson, who posted every day — and always received comments. “I met so many others because they came to me, saying, ‘I wanted to give up, but you inspired me to do it.’ That makes me feel good because I feel I’m fulfilling life’s journey of being there for others,” she says.

Winning on the Scale — and in Life 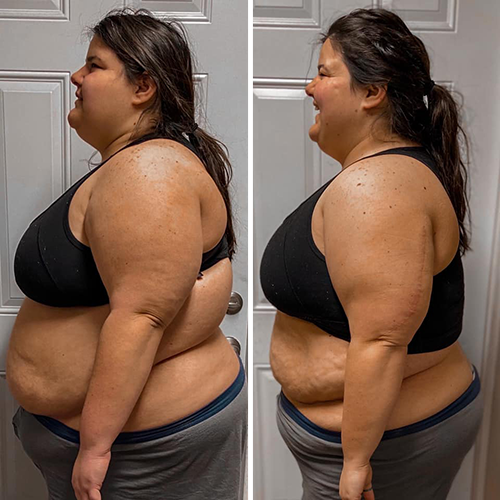 In four weeks, Robinson lost 17 pounds. But what matters more to her are the non-scale victories, including going from two squat jumps and zero push-ups to 21 squat jumps and 11 modified push-ups. “In the past, every week, I looked at the scale,” Robinson says. “If the number wasn’t where I wanted it to be, I was disappointed and often would binge eat. Kelsey helped me see it’s more about how you feel and where your energy is at.”

She also found herself changing her eating habits. “I used to be addicted to Diet Coke; now I can’t drink it because it doesn’t taste good anymore,” she says. “I drink so much water and have formed better habits for myself. If I eat anything not healthy, I can feel it in my stomach. I started to notice that change really quickly.”

One thing that’s especially helped Robinson stick with the program is something Kelsey told the group at the very beginning: “You can do more than you think.”

“Just show up and try to be better than the day before,” Robinson says. “4 Weeks of Focus has made me feel better about myself, and I want to keep trying. It’s not just about losing weight, I’m trying to change my life and maintain a healthy lifestyle. I’m super excited to keep going.”

For her latest program "Get Strong With Kelsey Heena", Kelsey tapped into the Openfit community, recruiting...

Here’s What Kelsey Heenan Eats in a Typical Day

Kelsey Heenan, Openfit Trainer and mind behind 4 Weeks of Focus takes us through her "What I Eat in a Day."

Fitness victories are not always about scale-based results. We spoke to 4 Weeks of Focus community members ...