How MYX+Openfit Helped New Mom Elizabeth Get Her Confidence Back 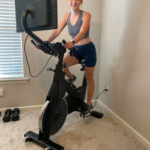 Before she found MYX+Openfit, Elizabeth R. was no stranger to workout programs — but nothing ever stuck. She was in a vicious cycle of committing to programs and getting burnt out, frustrated by her lack of progress and the repetitive nature of the workouts.

Then, last year, she had a new baby. Gaining 70 pounds while pregnant was hard for someone who already struggled with self-esteem issues — and suddenly, it was even harder to commit to a workout program.

“I didn’t have time to even worry about going to the gym or eating right because I was all consumed with just trying to figure out how to care for another human,” Elizabeth says.

In September 2020, she hit a breaking point. “I felt horrible,” she says. So she and her husband started researching budget-friendly options for home workouts that would fit Elizabeth’s schedule. After learning about MYX+Openfit, they bought a MYX Fitness Bike for Christmas.

Feel good, inside and out, with bike rides, barre classes, and more available on MYX+Openfit. Get started here today! 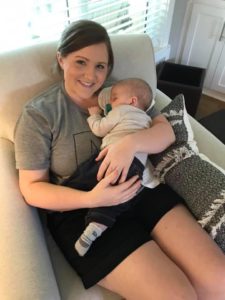 Elizabeth was excited about this new chapter, but she didn’t know what to expect from her MYX+Openfit workouts. “I had never even done a spin class or anything besides outdoor biking occasionally,” she says.

Her first ride was a calibration ride with Justin. “And I survived,” she adds. But more importantly, she had fun — and she was instantly hooked.

Elizabeth loved how positive and encouraging the MYX+Openfit trainers were, and she found their energy contagious. “They genuinely want you to succeed in whatever fitness [and] wellbeing journey you are on,” she says.

But they also felt relatable — like when one trainer joked that “this workout really sucks right now” during a hard push. And even during the toughest parts of a workout, they made it fun.

Before she started, tackling a fitness program with a new baby at home didn’t feel doable. But Elizabeth learned that the right program makes all the difference.

“I have learned that you can be just as disciplined and fit with at-home workout options as you could be going to the gym,” she says. With MYX+Openfit, she feels like she can get everything done and still squeeze in a workout, even if it’s just 15 minutes. 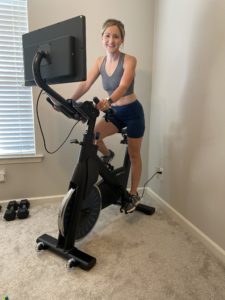 The MYX+Openfit trainers also helped Elizabeth rethink what it meant to work out.

Instead of pushing herself to the limit and burning out, they taught her to respect her body — even if it meant taking a break. She learned that knowing when to push and when to recover is an expression of love for your body and all it can do.

And while weight loss was still one of her goals, she found a new “why.”

“Working out isn’t just about looking your best or losing the most amount of weight,” she says. “It’s about feeling your best.” 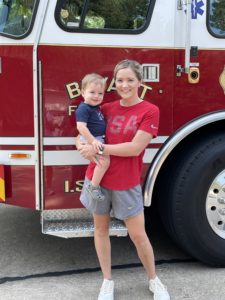 How she thinks about working out has changed, but Elizabeth has also seen a physical transformation thanks to her MYX Fitness Bike. She’s lost weight and built muscle mass, which has resulted in better self-confidence all around.

“I actually like looking in the mirror and seeing myself flex and all the muscle definition that I have now,” she says. “I’m not afraid to go out in public.”

She’s also improved her energy levels and stamina — which is key when it comes to looking after a little one. “I feel capable and engaged in life,” she says. “I am not as tired as I used to be, even keeping up with a toddler.”

And the burnout she used to feel after getting bored with a workout program? That’s nowhere in sight. Now she looks forward to her MYX+Openfit cycling workouts.

“I love working out and feeling my body move in ways that I used to think were impossible,” she says.

Got a New MYX II Fitness Bike? Here’s How to Set It Up

At last, your sleek, new MYX II Bike has arrived. But before you hit the virtual road, use these tips to ...

When you're deciding between cage pedals vs. clips, it largely comes down to preference. But learn when one...