How Do You Know If You're "Addicted" to Sugar?

If you’re worried about whether or not you’ve got a sugar addiction, the answer might be in the question. The FDA’s dietary guidelines recommend limiting added sugar to 12.5 teaspoons per day. The average American consumes about 17.

So, chances are you consume too much sugar. Whether that qualifies as addiction? Well, that’s what the next thousand or so words are for.

Find out more on how to manage cravings by signing up for Openfit for free today!

Can You Really Be Addicted to Sugar?

“Sugar clearly has the key elements of addiction,” explains Dr. David L. Katz, M.D., founding director of Yale University’s Yale-Griffin Prevention Research Center. “The more you eat it, the more you crave it, and those cravings can become very strong.”

It can also be hard to cut back once you develop a sweet tooth, which is only sugar-coating what actually happens when you’re hooked on the sweet stuff (not to mention the astronomical dental bills). Studies have found potential links to the behavioral and neurochemical changes in a brain on sugar to one on drugs.

Why Do We Crave Sugar?

There are a number of reasons why we’ve become slaves to sweets, and they ain’t all natural.

From an evolutionary standpoint, sugar addiction is perhaps one of the easiest to understand. There was a time when the reward system, or the pleasurable sensations that accompany sugar consumption, once helped humans survive.

Eating sweet foods, such as fruit or honey, was a way for early man to make it through long winters or times of scarcity. However in modern society, sugar is all around us — lurking in places we might not expect it…

Sugar is so seductive that the food industry often laces savory foods with it, such as pasta sauces and salad dressings. That, of course, coaxes us into eating more.

“Anything in a box, bottle, or bag almost always has some type of added sugar,” explains Katz, who’s also president of the True Health Initiative. Along with eating minimally processed foods, he cautions consumers to read labels and look for options that don’t have added sugar. (They’re out there!)

Sugar goes by a slew of different names (there are at least 60 terms, ranging from “cane sugar” to “diastatic malt”), so it can be challenging to decipher when a product has added sugar. “Sugar is hidden in so many foods under so many different names that many people aren’t even aware they’re consuming it,” says Allison Stowell, MS, RD, CDN, of Stowell Nutrition. “There are foods that don’t necessarily taste sweet on your tongue but break down as sugar in your body.”

Further compounding that are some sugary foods that enjoy a sort of health halo, like granola and Greek yogurt. Stowell points out that some sweetened versions of the latter are nearly synonymous with pudding, nutritionally. However, starting in 2020, new nutrition labels will be required to present information on added sugar more clearly for consumers.

What Happens When You Consume Sugar?

“Sugar stimulates the release of dopamine and neurotransmitters in your brain, resulting in the same neurochemistry that fosters a lot of addictive or pleasure-seeking behaviors,” explains O’Keefe. It also spikes insulin levels, to which some people are more susceptible than others.

“Once you get on the rollercoaster of sugar highs and lows, and insulin highs and lows — which directs where calories go — you might also eventually develop leptin resistance.” Leptin is a hormone that is believed to help alert your brain that you’re full.

When your leptin levels get out of whack, you may potentially have the sensation that you’re hungry all the time. People who eat too much sugar often eat a meal and continue feeling ravenous because their brains are likely not receiving the correct message to let them know they’re sated.

In addition to all this, you can also develop a tolerance to sugar. The more you eat it, the more you need it. Over time, sugary foods will no longer taste as sweet as they once did — and you’ll need more to feel a “sugar rush.” Conversely, someone who doesn’t consume candy by the truckload might find a slice of Oreo Dream Extreme Cheesecake sickeningly sweet or even unpalatable.

How Do You Know If You’re “Addicted” to Sugar?

When sugar has become a problem, you might indulge in a cookie or a serving of ice cream and find yourself instantly wanting more — and also find it difficult to stop. “Anytime we feel unsafe around a food, or it has power over us, that could be a sign of an issue, especially when the craving doesn’t align with the sensation of true hunger,” says Stowell.

“Some people tell me they feel out of control when they’re around sugar. Or that they can’t have any at all because they’ll overindulge.” If that’s you, it’s probably time for an intervention.

Other signals that you might have a problem with sugar include cravings, such as thinking about eating sweets even when you’re not hungry or in response to stressful situations. Once you develop a sugar habit, it’s quite common to experience an intense longing for it.

How Do You Break the Sugar Habit 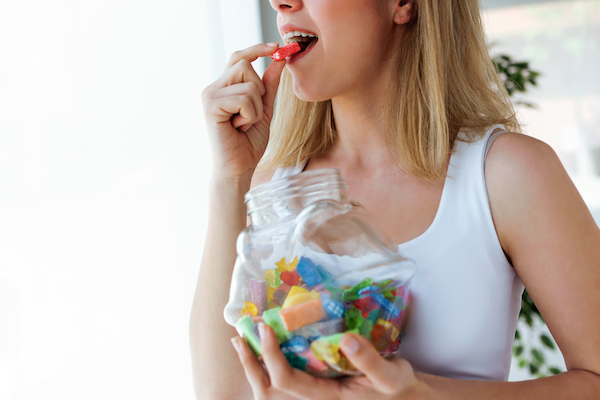 “With my patients, I have them focus on first eliminating stealth sugars,” Katz continues. Most people won’t miss those sneaky sugars in savory foods and it will reduce their overall sugar intake.

“Dialing down the overall sugar you’re eating helps re-sensitize your taste buds. It’s essentially rehab for them,” says Katz. “Continually bathing taste buds in sugar puts them into a coma-like state. Reducing the sugar wakes them up again, and they become more sensitive to sugar.”

Some people might even be able to quit added sugar altogether; however, finding the right strategy is highly individual. It can take several weeks to really notice the difference, according to O’Keefe.

Those with the willpower to cut sugar abruptly may find their cravings subside as soon as a week. This, of course, can also leave you feeling tired, and may possibly even cause minor headaches for a few days. But it’ll help break the habit quickly, and once the side effects subside, you’ll likely feel better than before you quit.

“The longer you go, though, the less you’ll crave sugar and the easier it becomes,” O’Keefe advises Eventually, your body will start signaling you to eat the right foods — and the sugary ones might even seem downright nauseating.

Cemile has been a freelance writer for more than a decade, writing about everything from style icons to fancy sinks. She studied at Boston University, and has written for New York magazine, GQ, Travel + Leisure, Women’s Health, WIRED, Food + Wine, Surface, Fortune, and Entertainment Weekly. Follow her on Instagram

Is Popcorn Healthier for You Than Other Snack Foods?

Popcorn can be a healthy snack or bad for you, so find out all about popcorn nutrition and the different ty...

Almonds are a good source of protein and fiber, find out more about their nutritional value and health bene...

Halloumi is a grillable cheese originating from Cyprus, which can be used for many delicious recipes. Find ...

There are actually plenty of options at Starbucks if you're cutting out sugar, you just need to know what t...

15 of the Healthiest Frozen Foods from Trader Joe’s

Here are 15 of the healthiest Trader Joe's frozen food items. From main meals, to snacks, and even dessert,...

Products are manufactured and sold by a third party. As an associate, Openfit may earn commissions from qua...

Ready to spice up your meals and snacks — literally? Here's our guide to 8 of the best Trader Joe's spice...