A recent study of nearly half a million people has shown — and not for the first time — a strong correlation between soft drinks, chronic disease, and death. And we are not only talking about sugar-sweetened soda. Artificially sweetened soda-pop has also been reported to potentially increase the risk of death, believed to be linked to circulatory diseases.

For healthy alternatives check out Openfit’s programs. Each one comes with a nutrition plan to keep you on track. Try it free today!

From 1992 to 2000, researchers tracked the soda and diet-soda consumption habits of 451,743 subjects from 10 European countries.

Funded by the European Commission (DG-SANCO) and the International Agency for Research on Cancer —not the sugar industry — the study grouped participants based on the frequency with which they consumed sugar-sweetened or artificially-sweetened soft drinks. These frequencies ranged from less than one glass per month to two or more glasses per day.

Significantly, researchers defined a “glass” as 250 milliliters — much less than the average American consumes in one sitting. For example:

Three of those per week at your favorite fast food joint would put you in this study’s highest-risk bracket for soda drinkers.

Over time, the researchers tracked the number of their 451,743 subjects who died. Their conclusion: both artificially sweetened and sugar-sweetened soft drinks were “positively associated with all-cause deaths.”

In layman’s terms: the more soda you drink, the more likely you are to die.

In the study, the relationship between drinking soft drinks and poor health was not linear, but “J shaped.” There was a threshold beyond which consuming additional soft drinks became dangerous:

If you’re going to pick a poison, then, this study suggests you’re better off choosing one with sugar than with Saccharin.

The research further showed that:

This study suggests that sugar is not the only dangerous ingredient in soft drinks: sugar-free diet drinks present health risks as well. 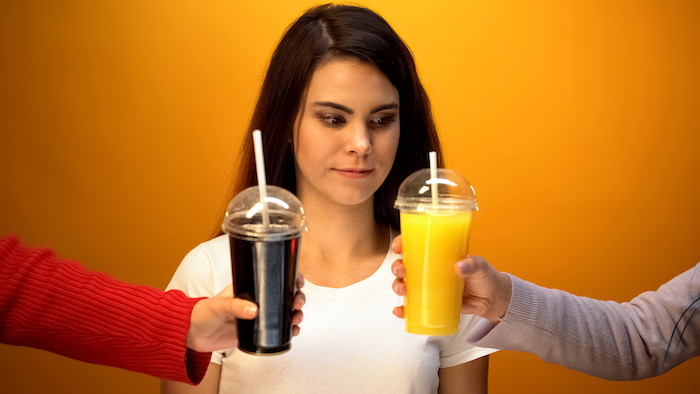 Critics of a study like this one—on an existing population outside a lab rather than a select group in a controlled setting—are quick to point out that “cohort” studies don’t show causation, only correlation. This study doesn’t allow us to conclude that soft drink consumption leads to death or disease; only that one appears connected to the other. In a court of law, prosecutors would need more evidence to prove soft drinks guilty of those deaths beyond a reasonable doubt.

Although researchers made an effort to eliminate confounding factors, there’s no way to fully control for them in a study like this. So it’s possible that consumption of soft drinks is related to many other factors that impact health and longevity, including:

And self-reporting—a type of data-collection widely used in this study—can be inaccurate. (Can you honestly state how many milliliters of sugar-free soda you drank last month?)Still: this large study supports a growing body of evidence suggesting that, if we want to maximize health and longevity, soft drinks — sugary or otherwise— shouldn’t play a part in our diets. So fill up your water bottle instead of picking up that can of soda.