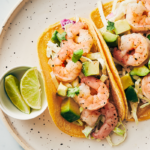 Looking to shake up Taco Tuesday? This fresh twist on shrimp tacos, topped with a tangy cilantro-lime slaw, is like a staycation for your tastebuds.

Inspired by street tacos, this zesty shrimp taco recipe is perfect for jazzing up your weeknight repertoire. But it’s healthier — and easier on your wallet — than stopping for takeout at your favorite taco spot every time you have a craving for Mexican cuisine.

This recipe calls for some of our favorite south-of-the-border ingredients, like citrusy lime, bright cilantro, and of course, avocado — can’t skip the avo! And from prep to plate, our easy shrimp taco recipe takes less than 15 minutes.

No matter how you’re spending your summer, these shrimp tacos will transport you straight to a sunny beachside cantina.

Need help meal prepping? Get quick and healthy recipe suggestions for every day of the week with Openfit’s One Minute Meal Plan! Try it here for free. 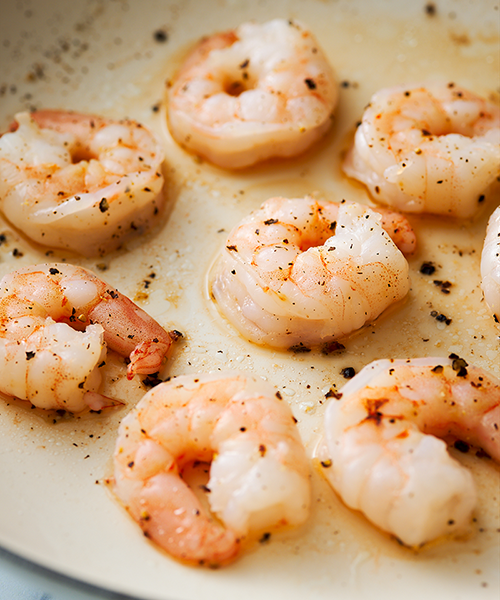 There are a few different ways to cook shrimp. This recipe calls for cooking them on the stovetop, but you can also opt to grill, broil, air fry, or poach your shrimp. (Just keep in mind that using a different cooking method may change the nutritional stats slightly.)

Shrimp are actually the most popular seafood in the U.S. We eat around four pounds on average per year, compared to only about two pounds each of salmon and canned tuna.

Shrimp are relatively sustainable, which is good news, and the FDA lists them among the best choices for seafood. A 3-ounce serving of succulent shrimp has 84 calories and provides 20 grams of protein and less than a gram of fat.

(We’ve got a few other delicious shrimp recipes to hit the spot, like lemon-garlic shrimp and garlic shrimp zucchini noodles.)

Made with a shredded cabbage base, the crunchy slaw packs a ton of flavor thanks to garlic powder, ground cumin, and a squeeze of fresh lime. And in lieu of the usual shrimp taco sauce, we’ve made our own healthier version of traditional Mexican crema. We’ve used Greek yogurt instead of the usual heavy cream, which provides protein and the perfect balance of creamy and zesty flavors.

Sliced avocado adds some healthy fats and vitamins — plus it gives these shrimp tacos all the creamy deliciousness of guac, without having to actually make guac.

Scoop it all into two corn tortillas and you’ve got a simple meal filled with exciting flavors to spice up your Taco Tuesday (or any day of the week, really).

Bask in summer vibes with these delicious and healthier shrimp tacos! They pack 35 grams of protein per serving and take less than 15 minutes to whip up.

Tip: If desired, you can heat up your tortillas on a skillet over medium-high heat, flipping until golden on both sides. 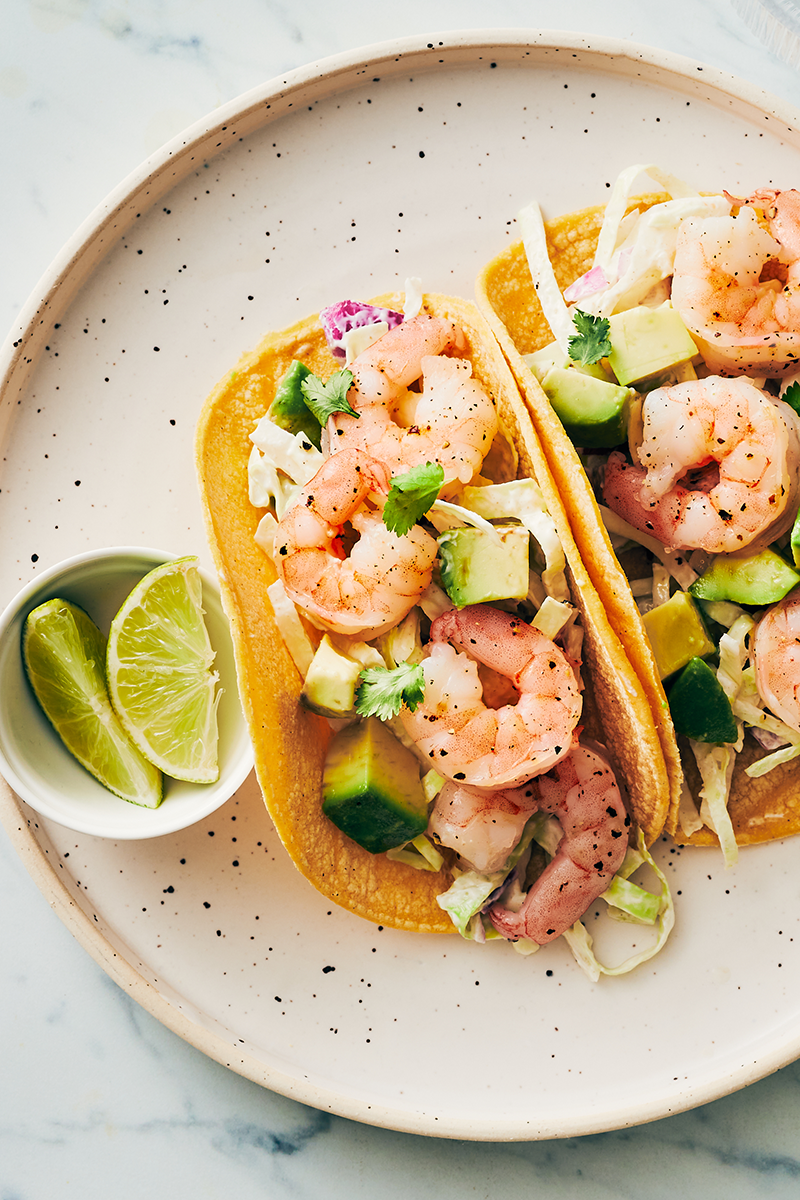