How Do You Know If You Have Seasonal Affective Disorder?

When the warm weather ends and winter settles in, do your energy and mood crash? If you feel like hibernating under the covers ’til spring, you’re hardly alone.

Nearly 14 million people in the U.S. are feeling the same way.

Seasonal affective disorder (SAD) is a specific type of depression, one much graver than a simple case of the winter blues, says Norman Rosenthal, MD, the world’s leading expert on the disorder and author of Winter Blues: Everything You Need to Know to Beat Seasonal Affective Disorder. But how can you know the difference between SAD and other types of depression?

For starters, SAD emerges almost like clockwork, usually after the shift to Daylight Savings Time: As the days get shorter and the light more scarce, your body’s biological clock can get thrown off.

Blame for SAD has been attributed to the overproduction of melatonin (which prompts drowsiness in response to darkness) as well as difficulty regulating serotonin (which helps balance mood). Further compounding the effect, decreased exposure to sunlight in the winter limits the body’s production of vitamin D, which is believed to regulate serotonin. Voila: The perfect SAD storm.

The disorder tends to run in families, with women being two to nine times more likely to suffer from SAD than men, who are likelier to experience more severe symptoms. Although the gender breakdown is not entirely understood, it could be related to female sex hormones like estrogen and progesterone, according to Rosenthal.

How Do You Know if You Have SAD?

Although there’s no official “test” for SAD, it usually follows a similar pattern the same time each year. “You can construct a diagnosis by history,” Rosenthal says. Severe sadness which has persisted for at least two winters is another clue that it might be a case of SAD, according to the American Psychological Association, which says that it differs from regular depression in that SAD has a fixed beginning and end.

Simply put, if you find yourself getting blue beginning in the fall—then cheer up and gear up as the spring and summer surface—it’s a good bet you’ve got a case of SAD, according to an overview of the disorder published in Depression Research and Treatment. The peer-reviewed journal calls it a “type of recurring major depression with a seasonal pattern.” 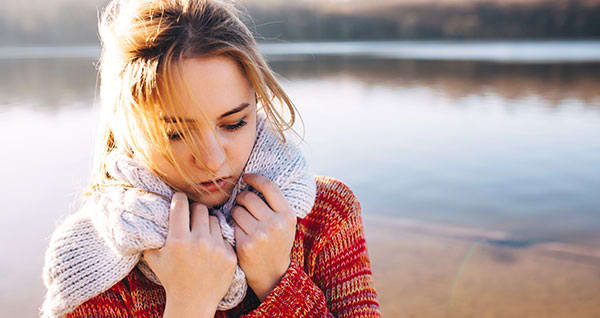 Rosenthal points to the following clues to SAD:

You not only crave sweets and white starches, but you just can’t get enough of the stuff. Why? Because these foods indirectly boost the production of serotonin, the brain chemical that’s naturally elevated when you’re exposed to light, which is lacking in the winter. No wonder they’re known as “comfort foods!”

But comfort they won’t, at least not for long: The boost is short lived, warns Rosenthal. “You’ll feel energized, but within about an hour of eating you’ll crash and feel fatigued when the sharp drop in blood sugar kicks in,” he says. And then a vicious cycle begins: You’re lethargic and irritable all over again, and reach for another dose of carbs.

“It’s important to limit the types of carbohydrates that give you ’empty calories,’ like white flour and sugar,” he says. Instead, focus on lean protein, eggs or fish; steel-cut oatmeal; part-skim cheeses; nuts; and plenty of green vegetables and fruits that won’t cause a sugar spike.

If you feel like you’ve had too much to drink—but haven’t—or like you didn’t get much sleep last night—but did—it could be SAD. People with seasonal affective disorder have problems thinking clearly and quickly, says Rosenthal.

It may be tough to keep up with the conversation around you, or to be your usual sharp and witty self. The smallest task can seem insurmountable and you might feel as if you’ve lost your edge. Calling in sick suddenly becomes a tempting alternative to sitting mutely at your desk, unable to get much done.

You’re usually the first one to say, “I’m in!” but right now, you’re not feeling especially sociable. Dealing with SAD makes you want to disengage, retreat to couch potato mode, and hole up at home in your comfiest jammies; parties can wait until it gets warm out again. “People with SAD often just want to be left alone,” Rosenthal says.

What happened to that pleasant, easy-going person? She’s out to lunch—until springtime. Seasonal affective disorder can make even the most even-keeled among us feel out of sorts and unlike ourselves.

Even if you recognize you’re acting this way, you still may not be able to help yourself, notes Rosenthal. (So, hopefully your friends and loved ones will realize it’s just that time of year, and love you anyway.)

Rosenthal reports that it’s not uncommon for people with SAD to experience various physical problems during wintertime, ranging from headaches to backaches to different types of infections. “They may even feel like they have the flu all winter long,” he says.

Do you find yourself wandering the brightly-lit aisles of your local supermarket when you don’t need a thing? It’s common for people with SAD to crave light without even realizing it, notes Rosenthal. Light can have a profound effect on moods; conversely, avoiding light can make matters much worse, he says.

SAD isn’t just limited to cold weather—summer can bring on sadness, too. A long spell of cloudy days, or heavy fog that obliterates the light can unmoor a person with SAD, even if the temps are balmy and pleasant. Rosenthal refers to this as being like a “human weather vane.”

How to Treat SAD

The National Institutes of Health (NIH) reports that light therapy is an effective treatment for SAD. Now, that doesn’t give you license to go to your local tanning salon, since these rays can contribute to skin cancer, but feel free to grab your sunglasses and head out for a walk on a bright sunny day.

You can also use a light box or turn on some extra lights around the house when a walk isn’t possible. Rosenthal recommends starting light therapy as soon as the first symptoms of SAD appear. You may also want to consider an alarm clock that wakes you by simulating dawn.

But light alone doesn’t work for everyone: Nearly half the people treated with it need something more, notes the NIH; that’s where things like antidepressants and psychotherapy can be added to the mix.

And of course, the role of exercise in boosting your mood can’t be overstated. It’s a sure-fire way to help relieve stress and anxiety—feelings that can both exacerbate symptoms of SAD, says the Mayo Clinic. And the fact that it can help with the extra pounds that may hitchhike along with SAD is another reason to get out there and move!

Sheryl Kraft is health and beauty journalist who is passionate about what she writes: consumer-friendly pieces that take the guesswork out of healthy living. She has written for CNBC.com , HealthyWomen, Chicago Tribune, Parade, AARP, Prevention, Weight Watchers, Family Circle, EverydayHealth, and more.Follow her on Twitter.

What Is Gua Sha, and Does It Help With Muscle Pain?

Gua Sha is one of the earliest forms of self-care deriving from ancient Chinese practices and is known for ...

13 Gifts for Anyone Who Needs a Positivity Boost

We all need a bit of positivity in our lives this year. If you have a friend who needs a pick-me-up this ho...

We usually don't view walking as more than a way from getting from one place to another. But here are some ...

How Tai Chi Breathing Can Make You Better, Faster, Stronger

If you don't have time in your schedule for yet another fitness activity, simply merging tai chi breathing ...