Sea Moss: The Other Sea Vegetable

Ever hear of sea moss? While it’s not the type of seaweed you’ll eat in your favorite sushi roll (that’s usually nori), sea moss is found in a surprising number of foods you may eat regularly, including plant-based meat substitutes. It is also used in cosmetics and supplements.

Stay up to date with what’s new in health and nutrition on Openfit! Get started for free today.

Sea moss has a number of unique qualities and potential nutritional benefits, as well as many essential minerals.

Let’s dive deeper into this sea vegetable (the preferred term nowadays for “seaweed”).

What Is Sea Moss?

Some common monikers for sea moss include:

Sea moss is found in abundance along the Atlantic coast, especially in rocky areas, explains Coogan. Whether you call Chondrus crispus sea moss, red moss or Irish moss depends on where it grew. Sometimes sea moss refers to a different species entirely.

“It differs from red moss based on its location of origin,” she says. “Red moss hails from Scotland, while Irish moss is more prominent in the rocky regions of Ireland and the Atlantic coasts of Europe and North America.”

The name “carrageen” is said to come from the Gaelic word carraig, meaning “rock.” Sea moss simmered in milk with spices was a common drink during lean times in both Ireland and the Caribbean (where that type of algae is also found). 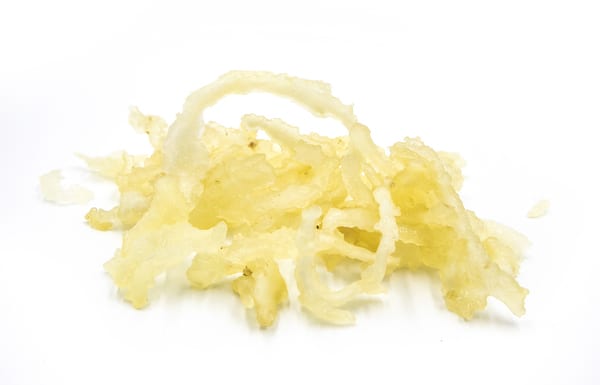 Since sea vegetables, including sea moss, grow in the ocean, they may contain impressive amounts of essential minerals and trace elements (thanks, saltwater).

1. Minerals and Vitamins in Sea Moss

Sea moss and other types of seaweed also contain iodine, another essential mineral.

Sea moss also goes by red algae because of its most common color, which can range from greenish-yellow to dark purple, says Coogan.

Each of those pigments “carries different phytochemical properties,” she explains, in the same way that vegetables of different colors offer different micronutrients for your body.

That’s thanks to a type of complex carb known as a hydrocolloid polysaccharide, which forms a gel in water.

This is why sea moss can add a thick consistency to foods and beverages.

Is Sea Moss Safe to Consume?

Sea moss is an excellent example of how processing can change a food. Sea moss is the whole-food source of the gum known as carrageenan, says Coogan. Both sea moss and its derivative are “commonly used as thickeners, stabilizers, and emulsifiers in foods,” she adds.

While carrageenan has been considered controversial, sea moss as a whole, unprocessed ingredient wasn’t part of that debate. And, a 2018 review found that food-grade carrageenan was “generally recognized as safe based on a history of safe use, various acute toxicology studies and some recent chronic toxicology tests.” However, the authors of that review did call for more research into higher levels of carrageenan in the diet.

Food manufacturers use carrageenan as a thickener, but sea moss can do the same thing:

Coogan says sea moss provides “a thick, silky texture that you can add to any food of your choice.”

Where Can I Get Sea Moss?

Check the labels of some of your favorite foods. From plant-based milks and ice creams to salad dressings, you might see sea moss (by any of its names!).

You can find sea moss at your local health-food store, in larger supermarkets or online.

Anytime you shop for a supplement, consider these questions: How is the supplement produced? Is it processed without harmful solvents or other additives? Is the company reputable? Do they offer proof of the tests they perform (including verification that what’s on the label is really what you’re buying and that they’ve tested for microbes, heavy metals, etc.)? Are they making claims that sound too good to be true? Keep in mind that supplement companies have to abide by industry standards for their claims, which are regulated by the U.S. Food and Drug Administration. Be sure to discuss any supplements you are considering with your doctor.

Here are some sea moss products available on Amazon:

“It is also sold as a powdered supplement you can add to protein shakes or smoothies, or in capsules, dried or dehydrated, or as a liquid tincture,” says Coogan.

Sea moss might be with the supplements, or it could be next to the other types of seaweed (excuse me, sea vegetables), perhaps in the Asian foods aisle. Again, ask for it by more than one name — sometimes it’s labeled as Irish moss or red algae.