Rough Around The Edges

These are the women who put the “action” in blockbuster action movies.

They’re the real Hollywood heroines, fighting armies of bad guys as they leap from rooftop to rooftop, hurtling down freeways on the hoods of cars — never flinching, whether they’re on fire, underwater, or careening through the air.

For professional stuntwomen, that’s all in a day’s work. To do what they do, they have to be among the fittest humans on the planet.

And if you’re one of those who likes their fitness programs to have fewer frills and a lot more swagger, then we have the perfect program for you. It’s called Rough Around The Edges, and it’s available exclusively on Openfit.

Rough Around The Edges will let you into this world. You’ll train with a team of professional stuntwomen and learn some of the actual moves they do to get ready for their roles. It’s tough, it’s demanding, and it’s designed to work your body in ways you’ve never worked it before.

If you’re ready to throw down, work hard, and give it your all, Rough Around The Edges will give you the opportunity to find out how strong you really are — and how much stronger you can be.

Because real power starts on the inside.

What Is Rough Around The Edges?

Rough Around The Edges is an intense, results-driven training program led by a team of professional stuntwomen, athletes, and martial artists — each with her own strength, skill set, and style of motivation — so you’ll always find someone in the group to connect with. They’ll take you through a series of challenging, unconventional workouts, like Dance Fight MMA, Action Star Cardio, Booty Building Boxing, and Firecracker Weighted Core — to help you build strength, agility, power, and quickness.

No doubt, the workouts are intense, but they’re also exhilarating and fun. Each challenges your body in a different way. You’ll use kickboxing moves to build your core, karate techniques to burn fat, and superhero stunts to build strength and lean muscle. But you don’t have to be a martial arts experts to do Rough Around The Edges. Just show up and work hard, and you’ll be rewarded with amazing, head-turning results — along with the feeling that you are, indeed, a badass (not that we needed to remind you!).

The unique team of women leading the workouts is, to say the least, not your typical group of trainers. Unless, of course, you’re used to training with stuntwomen.

These six trainers are all highly trained experts who know how to tune the human body for maximum performance. Each one brings her own strength, style, and personality to her workouts, and together, they work hard to support and empower everyone in their squad to perform at their highest level, including you.

Who Is Rough Around The Edges For?

It’s for anyone who wants to get strong and fit, and join a unique team of badass women who are out to inspire you to become the best version of yourself. If you have a passion to be stronger, inside and out, you belong in Rough Around The Edges.

If you’re looking for frills, you won’t find them here. This isn’t your group class at a boutique gym where what you wear and how you look matter more than the work you’re willing to put in.

Rough Around The Edges is raw and real — and yes, that means the workouts can be challenging. It’s made for those who are at an intermediate to advanced level. But if you’re new to working out, the trainers have you covered. They break down every move, step by step, so you can follow the whole progression. There’s also a modifier for each move, so you won’t feel like you’re pushing yourself too far beyond your level. Together, you get it done.

Will Rough Around The Edges help you lose weight? If that’s your goal and you follow the workouts and stick with a healthy eating plan, absolutely. Will you get strong? You’ll become not only quicker and more agile, but also possibly stronger than you’ve ever been before, both inside and out. In fact, you just might discover that you’re a lot more powerful than you know. 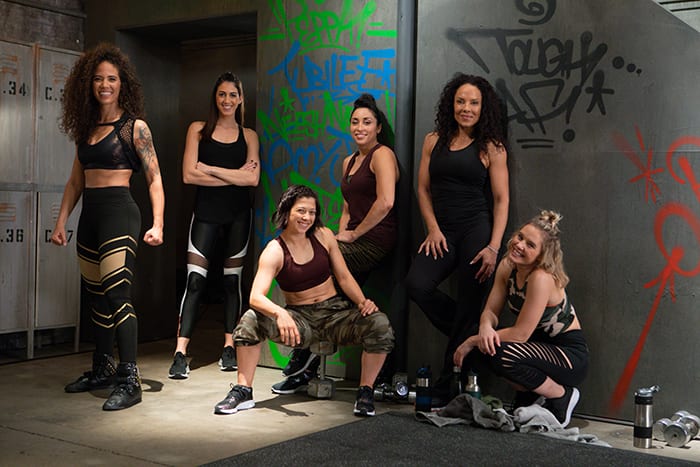 Who Are The Trainers?

You’ll join an incredibly supportive team of unconventional athletes — stuntwomen, martial artists, gymnasts, and dancers — from outside the “regular” world of fitness. They’re at the top of their field thanks to years spent tuning their bodies to perform almost superhuman feats of strength, power, and agility. Now they’re bringing their skills and know-how to Rough Around The Edges to help you build the same kind of real-world athleticism.

Anisha Gibbs is an actress, stuntwoman, dancer, and choreographer who is known for her work on Altered Carbon (2018), Beyond The Lights (2014), and Luke Cage (2016). Along with creating the popular Neesh Nation channel on YouTube, Anisha is co-founder of the Thr3e Live Dance Company in Providence, Rhode Island. With her background in dance, she says she adds “a little flavor, a little groove” to the workouts in Rough Around The Edges.

Amy Johnston has appeared as an actress and stuntwoman in films including Deadpool (2016), Suicide Squad (2016), and Captain America: The Winter Soldier (2014). Daughter of a five-time world champion kickboxer, Amy has spent her life training in martial arts. She’s also skilled in dance and gymnastics. She hopes her workouts leave people feeling stronger, more empowered, and ready to reach a new level of fitness.

Michelle Jubilee is an actress, stuntwoman, producer, and writer with credits in a wide range of film and television productions, including The Fate of the Furious (2017), Spider-Man: Into the Spider-Verse (2018), and NCIS: Los Angeles (2018). She fell in love with the power and beauty of gymnastics at the age of three, began studying martial arts at 10, and was inspired to become a stuntwoman not long after. Today, she looks forward to sharing her skill at breaking through barriers, be they physical or mental.

Caitlin Dechelle is an award-winning actress, stuntwoman, and professional martial artist, known for her work in Wonder Woman (2017), Furious 7 (2015), and Teen Wolf (2011). Caitlin began touring the world as a karate competitor at the age of nine, and it was her passion for martial arts that inspired her to pursue a career as stuntwoman. She hopes the workouts will “share the dedication and passion we have for what we do” with everyone doing them at home.

Thekla Hutyrova is an actress and stuntwoman with film and TV credits including Deadpool 2 (2018) and Pacific Rim (2018), and she was nominated for a Screen Actors Guild Award for her work in Logan (2017). Starting at a young age, she competed as a Tae Kwon Do martial artist, eventually winning seven world championships. Her special skill at turning flips at competitions made stunt work feel like a natural progression. Her passion is inspiring people to discover they’re stronger than they think.

Corinne van Ryck deGroot began her career as a police officer in Canada, and discovered her skill for fighting on the police boxing team. Not long after, she began boxing successfully as a professional, eventually becoming the number-two ranked female boxer in the world. In 2010, she competed as “Panther” Corinne on the American Gladiators television series, and she is known for her stunt roles in Velvet Buzzsaw (2019) and Life As We Know It (2010). She is a professional boxing trainer and hopes, through Rough Around The Edges, to help people discover they’re stronger than they know.

Questions You May Have About Rough Around the Edges

What Do You Need To Do Rough Around The Edges?

You’ll need a TV or mobile device with an internet connection to do most of the workouts in Rough Around The Edges. For some workouts, a set of dumbbells is also required. A yoga mat is optional.

How Many Workouts Are In Rough Around The Edges?

Rough Around The Edges currently includes 17 workouts. Each workout in Rough Around The Edges is between 30 and 45 minutes long. Workouts include cardio, MMA, resistance, HIIT, core training, and dance. The program also comes with a 30-day calendar and a series of bonus videos with tips and motivational advice from each of the trainers to help you stay on-track.

How Do I Get Started With Rough Around The Edges?

All Rough Around The Edges workouts — plus the 30-day program calendar and the bonus videos — can be found within the member portal on Openfit.

Openfit is a digital streaming platform for integrated fitness, nutrition, and wellness. It’s the in-your-pocket management tool that shows you how simple it can be to live a healthy, vibrant life — your own way — every day. Get started today!

Get to Know the Trainers of Rough Around the Edges

While you see them kicking, punching, and dancing in class, we thought you might want to get to know a litt...

Check Out This Rough Around The Edges Workout Calendar

If you're ready to shake up your fitness plan, check out Rough Around The Edges on Openfit. Follow this 30 ...

Add Music to Your Workouts With These Customized Openfit Playlists

Cue up these workout playlists when you're doing your Openfit workouts. Available for Xtend Barre, Rough Ar...