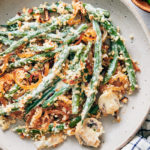 For years, hosting a plant-based Thanksgiving dinner meant two things: Time to pick up a Tofurky and wait for the declined invitations to come rolling in.

No more. You can make plant-based substitutes for carnivorous classics such as turkey and stuffing that are savory and hearty in their own right, without trying to replicate the flavor of meat. And going plant-based gives you a number of appealing, inventive options for delicious lighter side dishes and rich, satisfying desserts that are lower in sugar and fat. (It’s a great way to enjoy Thanksgiving without gaining weight.) Here are some of our favorites.

For more healthy recipes ideas to add to your holiday menu check out Openfit! Sign up for free today.

Instead of Turkey, Try… 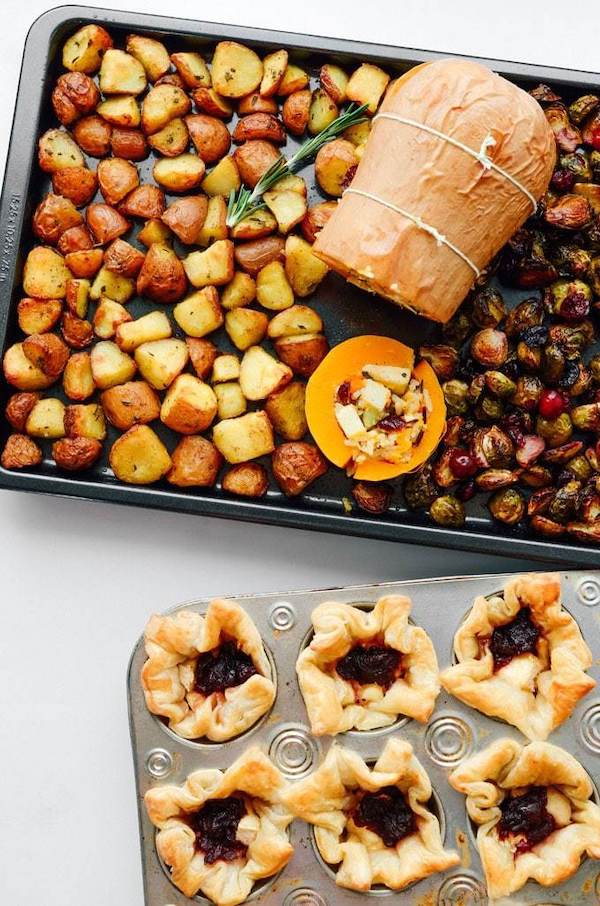 “The key to a plant-based Thanksgiving is to ensure that the table isn’t just full of side dishes,” says Sarah Bond of Live Eat Learn. “Fortunately, you can make some gorgeous main dishes using vegetables. I love to make a stuffed butternut squash, which can be sliced up and served like you would a turkey.” You can make it in a sheet pan simultaneously with sides of potatoes and brussels sprouts.

Shepherd’s pie, a British holiday favorite, can be brick-heavy. But not the plant-based version from The Smiling Onion, in which cremini mushrooms and lentils stand in for ground beef.

Beef Wellington — filet mignon coated with pate and wrapped in puff pastry — is about the meatiest dish imaginable.

Until Elizabeth Schuster, executive chef with Tenacious Eats in St. Louis, created this hearty plant-based version that swaps in mushroom duxelles and sauteed spinach. (And clean energy instead of a beef coma).

Carrie Forrest, M.B.A., M.P.H. in nutrition, creator of Clean Eating Kitchen, says she has the perfect loaf for a holiday main course or side. “This recipe is full of flavor and nutrition, plus it’s gluten free.”

“I like to make this vegan lentil stew as a main dish instead of turkey for Thanksgiving dinner,” says Bree Sheree of Bree’s Vegan Life. “It’s not at all like turkey, and is very filling.”

Instead of Buttery Mashed Potatoes, Try… 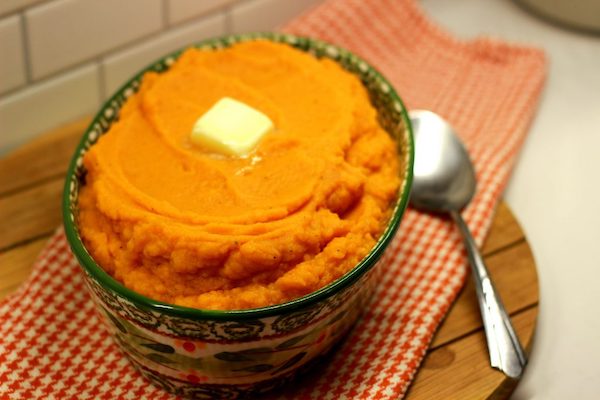 Mashed potatoes are the ultimate comfort food — until the quick-burning simple carbs have you feeling snacky an hour later.

Renata Trebing of Nourish With Renata has created a version using sweet potatoes, which are just as creamy, complex in carbs and rich in vitamin A. “And you can add even more vegetables into it without tasting them,” she says.

(If you’re really watching that butter intake, even on Thanksgiving, you may want to experiment with a lower amount than Renata’s recommendation.)

Instead of Traditional Meaty Gravy, Try…

“I am a plant-based physician,” says Dana Simpler, M.D., a primary care practitioner at Mercy Medical Center in Baltimore, “and about five years ago I started making an alternative gravy in addition to the traditional gravy for our family Thanksgiving dinners — of which most of the people are not plant-based. It became so popular that it’s now the only gravy we serve, and I have to triple the recipe.”

Instead of Traditional Sausage Stuffing, Try… 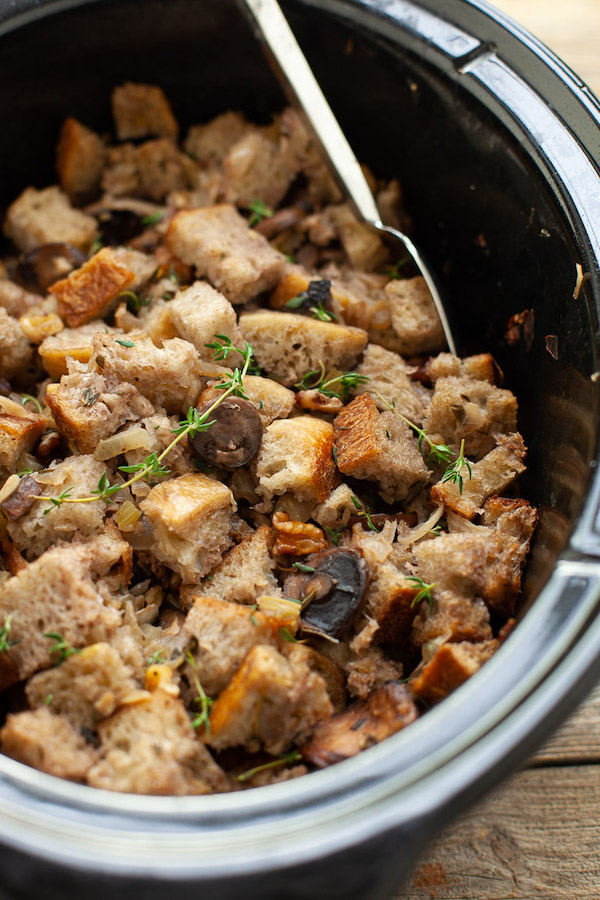 “This slow cooker mushroom stuffing is a delicious, savory substitute for traditional stuffing,” says Kara Lydon, R.D., L.D.N., R.Y.T., of Kara Lydon Nutrition and The Foodie Dietitian. “The mushrooms bring that meaty umami flavor you want out of stuffing. Bonus: It will save highly coveted oven space.”

Cauliflower has had a moment over the past few years, becoming a popular substitute for starchy white pizza crust and mashed potatoes. It has a savory heft — not to mention low carbs and plenty of fiber — which makes it a great base for stuffing instead of bread.

For a Healthy Side Dish, Try… 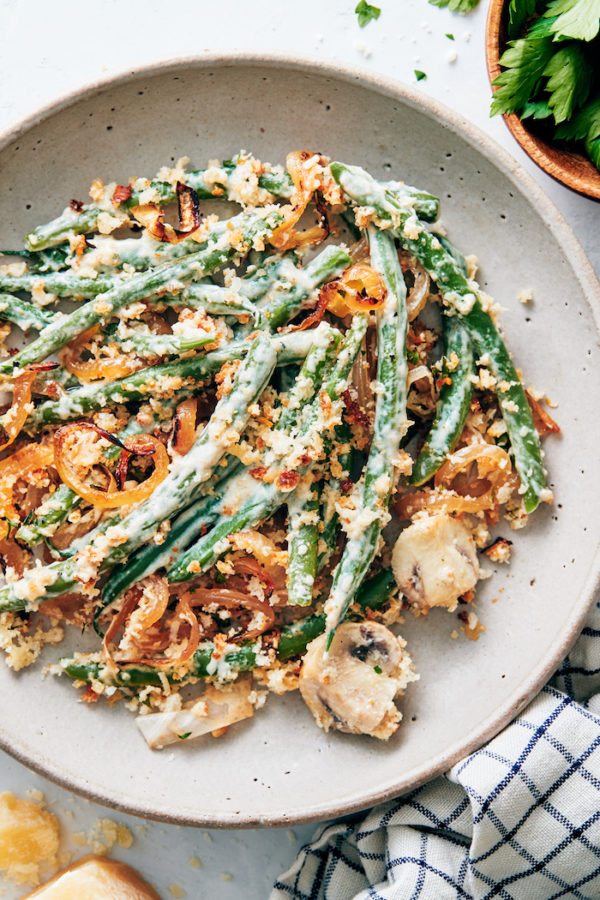 Green bean casserole has been a holiday classic since the 1950s, when it was invented by a soup company to incorporate its factory-processed products. This healthier version uses all fresh ingredients and is just as creamy as its Eisenhower-era ancestor.

For a Lighter, Plant-Based Dessert, Try… 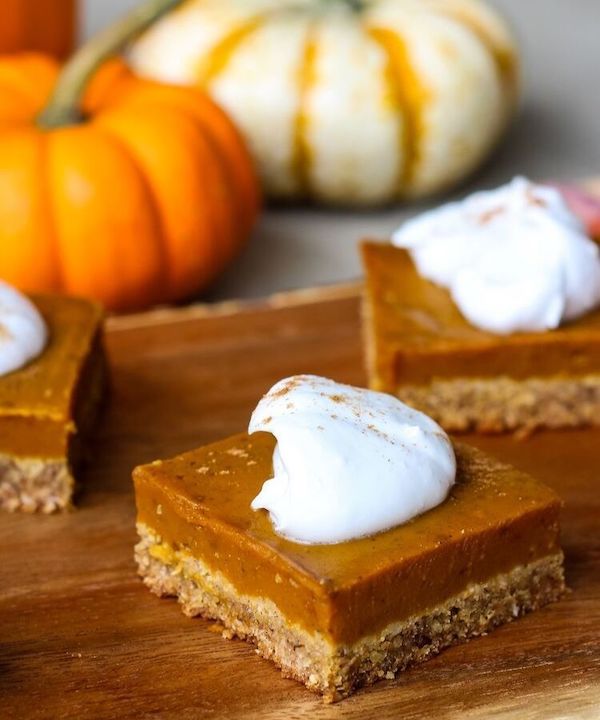 “No Thanksgiving would be complete without pumpkin pie,” says Alison Corey of Keeping the Peas. “The typical pumpkin pie is made with a flaky buttery crust, and a pumpkin filling made with evaporated milk, eggs, and white sugar. To make a plant-based version of pumpkin pie, you need to find a way to make a crust that doesn’t need butter, shortening, or white flour.

“These easy vegan gluten-free pumpkin pie bars are made with an oat and almond flour crust, and a pumpkin coconut milk filling, topped with a decadent coconut whipped cream and sprinkled with pumpkin pie spice.”

“This easy four-ingredient mousse captures the flavors of fall, a.k.a. pumpkin and cinnamon,” says Trebing. “It is super-quick to make, and you can top it with your favorite toppings, like pomegranate or pecans.”

Michael Martin is a New York City-based writer and editor who specializes in health, nutrition and lifestyle reporting. Follow him on Twitter.

15 Garbanzo Bean Recipes to Use Up Your Stockpile

Garbanzo beans or chickpeas are a great choice for legume, as they are a good source of protein without too...

Made with riced cauliflower, rolled oats, and avocado, this chocolate avocado protein shake packs in 24 gra...

Get the recipe for a healthy and delicious gluten free zucchini bread.

If you’re looking for a fresh, flavorful, and easy salad to meal prep for lunch, look no further than t...

Try These Pre-Workout Watermelon Popsicles Before Your Next Summer Workout

Sweet and refreshing, these homemade watermelon popsicles are the perfect pre-workout snack.

7 Tips for Healthy Grilling This Summer

Grilling is an American pasttime, but is it grilling healthy? We break down which is healthier - gas or cha...