How to Do the Parallel Squat With Perfect Form

Humans are born to squat: Infants do it. Athletes do it. In some parts of the world, adults do it while conversing or working, sometimes for hours on end. But in first-world countries, most of us stop squatting when we reach adulthood, and that’s a shame, because the parallel squat is one of the most effective, functional movements you can do, bar none. It strengthens your legs and glutes, mobilizes your hips and ankles, and improves overall power and athleticism.

There are, however, a surprising number of ways to screw up this seemingly simple movement. Read on for how to do a proper parallel squat, every time.

How to Do a Parallel Squat 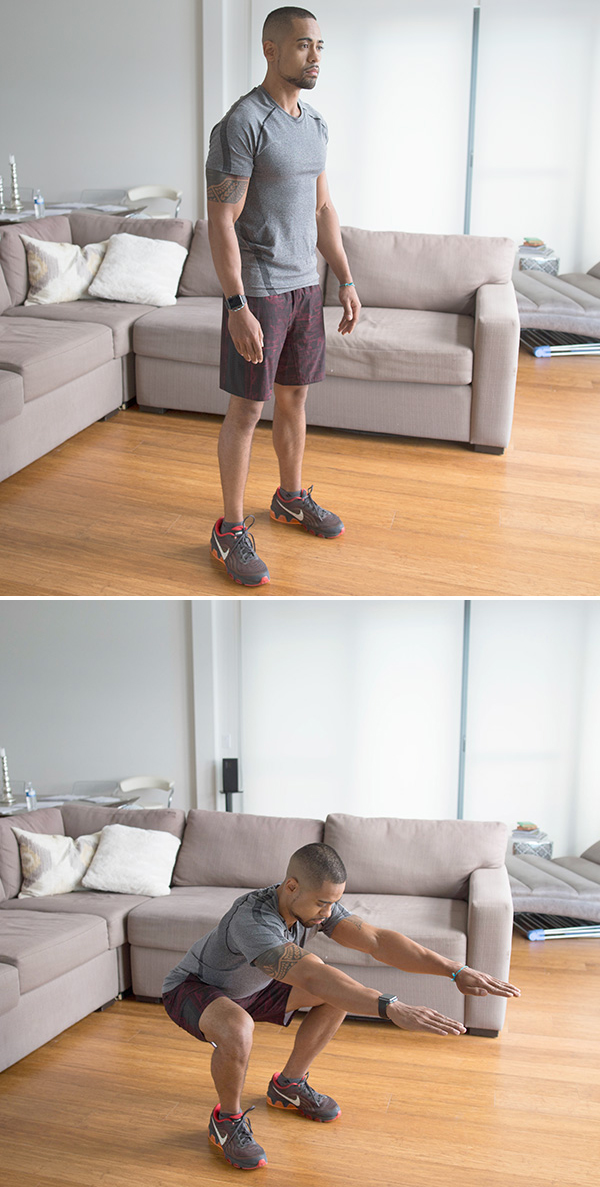 Most of us squat to sit multiple times a day but that doesn’t mean we’re always doing it properly. Here’s how to use correct form when you’re parallel squatting in the gym:

• Stand with your feet between hip and shoulder width apart, toes pointed forward (slightly pointed out is OK too), arms extended in front of you.

• Keeping your chest up, gaze forward, feet flat, and your lower back in its natural arch, bend at your hips and knees until your thighs are parallel to the floor. Your knees should be tracking in line with the middle of your feet.

• Pause, and return to the starting position.

What is Considered a Parallel Squat?

A true parallel squat is one where the exerciser lowers their hips until the tops of their thighs are parallel to the floor while keeping their lower back flat and their chest up.

Common Mistakes on the Parallel Squat and How to Fix Them

1. Too much weight: Many exercisers put a bar on their back before they’ve mastered the bodyweight version of the move. That’s asking for injury.

How do you know if you’re using too much weight? As you descend into the squat, says Openfit Fitness Advisor Cody Braun, CSCS, “You want a parallel line between your shins and your spine.” Seen from the side, in other words, your torso shouldn’t pitch forward more than your lower legs. If that happens (film yourself or have a buddy check your form), take some weight off the bar, or ditch the bar altogether, and build up gradually from there, using picture perfect form on every rep.

Variations on the Parallel Squat

Once you’ve mastered the parallel squat using your bodyweight (15-20 reps is a good target rep range for the beginner), you can start adding weight to the movement, first with a dumbbell held vertical in front of your chest (a goblet squat), then with a pair of dumbbells at your sides, and finally, if you choose to, with barbell back or front squats. Add weight slowly over time — and don’t lose the depth you developed while performing parallel bodyweight squats.

“Squats are one of the best exercises for assessing how the body moves, because it relates to everyday movement, and requires the entire body to be active,” says Braun. “It is also a great full body exercise.”

Some lifters swear by heavy barbell squats as the ultimate leg-builder; for others, they’re primarily a source of joint and back pain. So keep the bodyweight version in your rotation — as a warm-up, a thigh-building exercise, or both — but evaluate your own response to barbell varieties. If the move leaves you with painful knees or a bad back for days on end — have a trainer or physical therapist look at your form. No pain or problems? Full speed ahead.

What Muscles Do Parallel Squats Work?

Secondary players include your hamstrings (back-of-thigh muscles), which help with hip extension, and the core muscles of your lower back and abdomen, which provide stability throughout the move.