How to Do the Pallof Press

The Pallof press is an easy move to screw up. At first glance, it looks like a chest-builder, a shoulder move, even a mobility drill. In fact, it’s one of the most effective (and neglected) core exercises you can do.

Here’s how to do it—and why it belongs in your workout routine.

For workouts that will make the Pallof press even easier try Openfit’s T-Minus 30 program for free today! 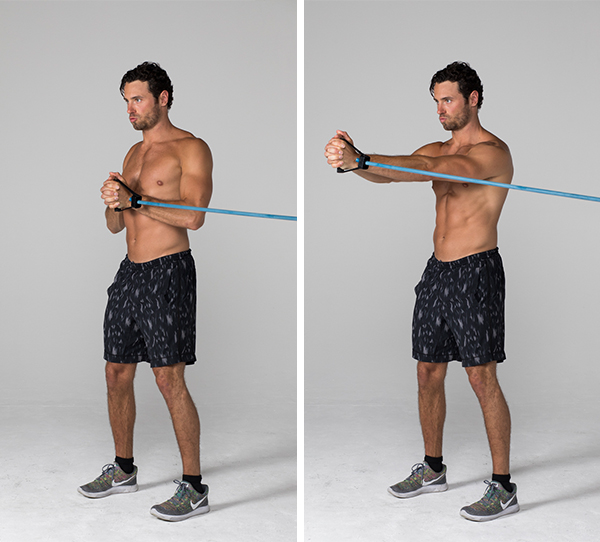 How to Do the Pallof Press

• Fasten an exercise band to a sturdy object at chest height.

• Interlace the fingers of both hands around the free end of the band and step back from the anchor point to create some tension on the band.

• Turn your body so it’s perpendicular to the anchor point and band, hold your hands near the center of your chest, and assume an athletic stance: feet shoulder width and parallel, knees slightly bent, torso upright. This is your starting position.

• Without moving your torso, slowly reach both arms in front of your chest until they are straight.

• Hold this extended position for a five-count, then slowly return to the starting position. Repeat for reps.

•Turn and perform the same number of reps facing the other direction.

Basic Pallof press variations are about altering body position rather than changing the movement.

Muscles Worked by the Pallof Press

Why Should You Do the Pallof Press?

For many fitness enthusiasts, core training consists of variations on the sit-up and the leg lift, movements that require the spine to flex (bend forward) and extend (bend back). And though the core muscles do help with those movements, flexion and extension aren’t their primary function.

“In general, the job of the core is to prevent unwanted motion,” says Tony Gentilcore, CSCS, owner of Core Training in Brookline, Massachusetts. Think of carrying a heavy suitcase in one hand or a squirming child: even though you don’t see much movement in your torso, your core muscles are working hard to keep you from bending and twisting. The Pallof press places that same demand on your core: its primary action is not to create movement but to prevent it.

Because it presents a demand similar to what these muscles encounter in life, Pallof presses are considered more functional—applicable to sport and life—than flexion movements like leg lifts or crunches.

Still, for optimal development and performance, it’s useful to perform many different types of core exercises, including Farmer’s walks, suitcase carries, front and side planks, as well as anti-rotational movements like the Pallof press.

Looking to spice up your ab routines? Here are 4 of the best ab workout tools to level up your workouts, pl...

Learn the Right Way to Activate Your Abs (Your Lower Back Will Thank You!)

Not feeling the right kind of burn during your abs exercises? Here's how to activate abs during your workou...

If you're looking for exercises to carve your core and lift that booty, here's an abs and butt workout that...

10 of the Best Stability Ball Exercises

Grab an exercise ball and start sculpting your muscles with these stability ball exercises that can be done...

The Best Moves to Train Your Chest and Abs

Train your chest and your abdominal muscles at the same time with these easy to follow routines, and pick t...

As popular as they are, sit-ups aren't always the most effective ab exercise. For other sit-up alternatives...