Paleo vs Keto: Which Diet is Best for You? 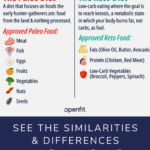 You’ve probably heard of the paleo and keto diets, two heavyweights on a list of current plans that promise weight loss, and shredded abs. Both discourage simple carbs and processed foods, so you’d be forgiven for assuming they’re mostly the same. However, paleo and keto are quite different.

Find what diet is best for you with Openfit! With a variety of different programs tailored to your fitness needs, you’ll reach your goals in no time. Try it for free today.

What Is the Paleo Diet?

Generally, we don’t think of the caveman era as desirable, given its lack of modern essentials such as the wheel and adequate streaming services. That all changed with the emergence of the paleo diet. The name comes from its focus on foods the early hunter-gatherers ate: Things that come from the land, nothing processed (and therefore low in added sugar and simple carbs).

Foods allowed on the paleo diet include:

Grains and legumes are off the table. Some versions of the paleo diet forbid dairy — including milk, cheese, and yogurt — alleging that prehistoric people didn’t milk cows. Other versions of the diet say dairy is OK.

Because there weren’t any cavemen around to score a book deal, the paleo diet is relatively flexible.

“Paleo stands for paleolithic, and supposedly what our ancestors ate,” says Kylene Bogden, RDN, CSSD, CLT, IFNCP, a registered dietitian nutritionist and team dietitian for the Cleveland Cavaliers. “The truth is that there’s no true definition for the word paleo. It’s kind of what we coined for natural, whole-food eating.”

What Is the Keto Diet?

The keto (or ketogenic) diet is also a very low-carb eating plan. On a ketogenic diet, the goal is to reach ketosis, a metabolic state in which your body burns fat, not carbs, as fuel. The keto diet encourages high consumption of fats, an average amount of protein, and very few carbs.

The three main food groups in the keto diet are

• Fat, such as nuts and seeds, olive oil, butter and avocados

• Protein, including fatty fish, chicken, red meat, eggs and full-fat dairy such as milk and cheese

Keto is more structured than paleo, encouraging adherence to “macros” (protein, carbohydrates, and fats), or percentages of food groups as part of the total diet.

“The average American diet is 20 to 30% fat, and the keto diet is 70% fat,” says Bogden. “It is literally a high-fat diet. You could take that a number of ways. Some people eat sticks of butter and cheese all day to meet those requirements. Others will eat avocados and nuts.” 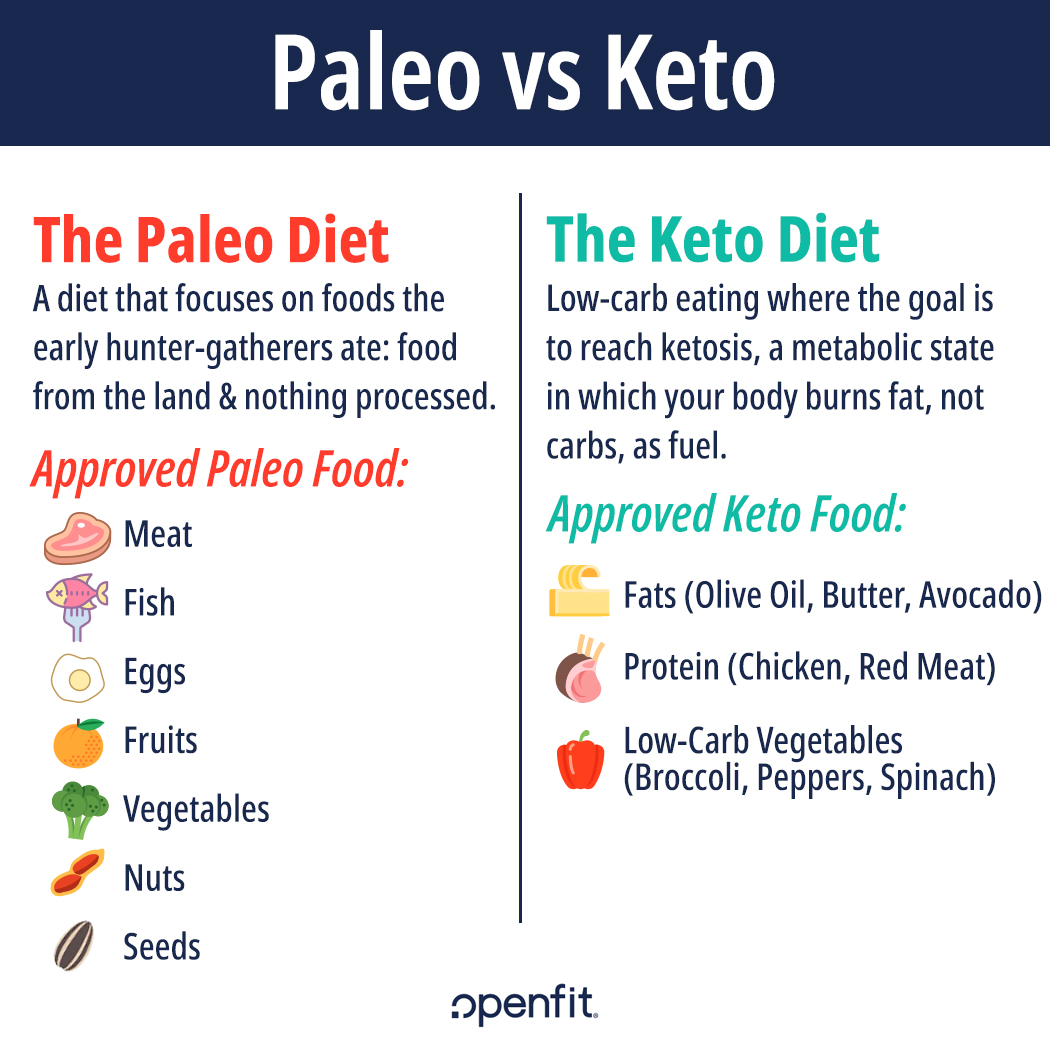 Paleo vs. Keto: How Are They Different?

The main differences between paleo and keto are:

“Keto is based on being fat dense, and depending on the style of keto followed, it can have very few vegetables and be heavily dairy-based,” says Gina Jones, MS, RDN, LDN, a registered dietitian nutritionist in Beachwood, Ohio.

But despite being more well-rounded, the paleo diet is not necessarily low in fat.

“While paleo is slightly higher in fat (compared to a typical healthy diet) because you’re focusing on good quality, nuts, seeds, oils, and meats, it’s certainly not 70% fat,” says Bogden. “You can have fruits, sweet potatoes, and higher-carbohydrate foods that you could never have on a ketogenic diet.”

Can You Lose Weight on Paleo?

A “low-carb diet” limits carbohydrates and encourages foods that are high in protein and fat. The actual number of carbs you are allowed to eat will vary based on the type of diet you follow.

Paleo doesn’t technically meet that standard, but you might find that you end up eating much fewer carbs. The diet bans processed foods, added sugar, grains, legumes, and dairy — carb-heavy foods that comprise a significant chunk of the modern diet. 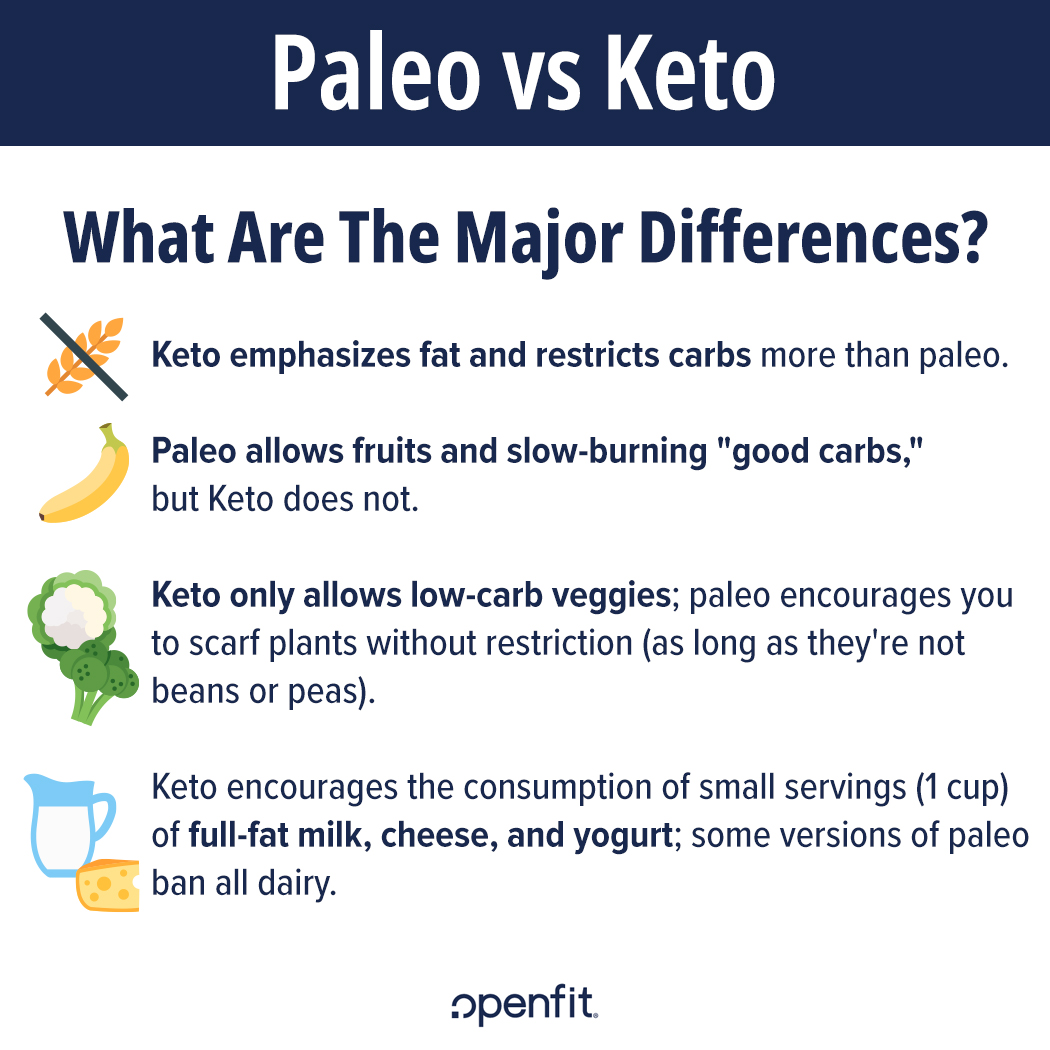 Are the Paleo and Keto Diets Healthy?

“Both diets can be healthy and effective if done properly,” says Jones. “A ketogenic diet can be used as a short term solution for weight loss, and it’s (been reported to be) beneficial for those with (certain) neurological disorders like epilepsy. A paleo diet can be great for those looking to eat real foods and implement a lifestyle change. You can lose weight on both plans.”

But keto may not be the best long-term dietary decision.

“Part of my job is monitoring lab results and looking at body composition and micronutrient deficiencies,” says Bogden. “After a few months of keto, it usually doesn’t look so good for long-term health. I don’t feel good about it unless there’s a serious medical condition. Performance-wise, for anyone who does short bursts of activity, it will be hard when you have such limited carbohydrate stores.”

Is Paleo Healthier Than Keto?

In Bogden’s view, yes. But she cautions that an optimal nutrition plan requires an individualized approach.

“In paleo, the goal is to eat real foods that come from the earth. There is not one human being who couldn’t benefit from feeding real food,” she says. “If you’re looking for a quick fix to lose weight, and you’re buying processed foods and blocks of cheese just to hit that 70% goal in keto, you’re not doing yourself any favors in the long run.”