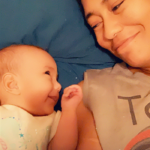 If you’re a regular in our Openfit Live classes, or you’re a member of the Openfit Teammates group on Facebook, then you probably already know Jasmine Hodges. If not, get ready to be inspired by her incredible fitness journey!

Over the past few years, Hodges has shared her amazing transformation with the Openfit community — and all the ups and downs along the way. Even better, she’s always taking the time to motivate and encourage others. Read on to see how Hodges kickstarted her healthy new lifestyle.

Get encouragement and accountability for your workouts from teammates and trainers in Openfit live classes. Try it here for free!

Hodges didn’t get the exercise bug until her late 20s, when she realized she had developed some not-so-healthy habits. “I kept complaining about my weight and how uncomfortable I was,” she says. “I had also picked up a bad smoking habit.”

Hodges decided to start walking for exercise, but she often fell short of her daily step goal.

She eventually moved on to running and joined a group for “slow runners” on Facebook. “I was completely new to running at the time,” she says. “I wanted to find a way to make it fun. I also wanted advice.”

In early 2018, the group told her about an online fitness platform where she could take live group classes. (Sound familiar?) “The group talked about how there were live trainers, and how I could run with others in the class,” Hodges says. “I loved the idea of having a sense of people to run with, without them actually being there.” 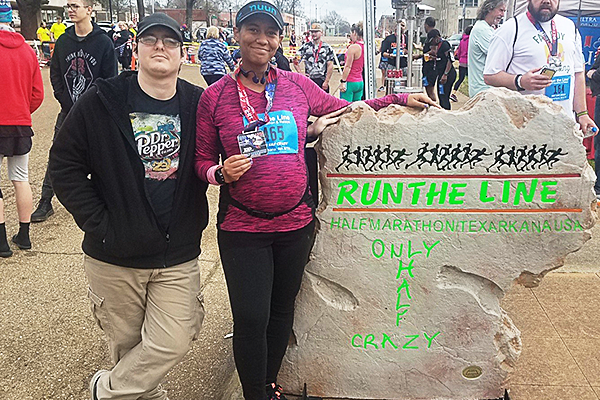 Although she didn’t like the actual running at first, the sense of community kept her going. “The more I ran, and the more encouragement I received from the community and teammates, the more I enjoyed it — and the more I wanted to run,” Hodges says.

As she started running more regularly, Hodges discovered it was not only enjoyable, but also relaxing. By that April, she was clocking at least 100 miles a month.

Inspired by how welcoming and encouraging everyone had been when she was starting out, she also became more active in the community. “It made me want to try to motivate people in the class and group more,” she says.

By November 2018, Hodges had 1,000 running miles under her feet — along with two half marathons, a virtual marathon, a 10K, and six or seven 5Ks. “Starting to run was one of the best decisions I’ve made,” she posted at the time.

As Hodges began trying other Openfit workouts, she found her favorite combo was running and strength training. “Starting Openfit sparked my passion for running, and I just love the feeling of being able to work out with weights,” Hodges says. “It makes me feel strong and capable of doing more than I thought I ever could.”

Along the way, Hodges — who once weighed 200 pounds — lost weight and, more importantly, developed a healthier relationship with food. Rather than bingeing when she’s bored or in a bad mood, she exercises, spends time with loved ones, or does something fun, like playing video games. 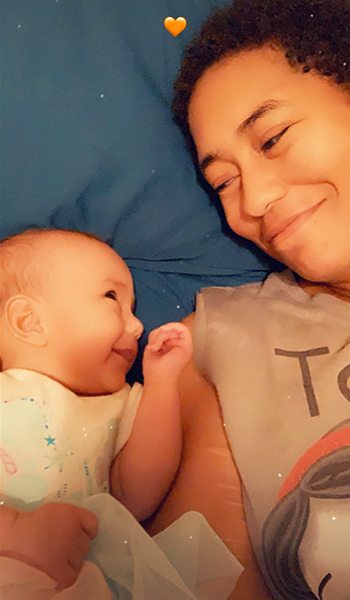 Hodges took on an exciting new challenge this year — motherhood! After giving birth to her daughter in March, Hodges is even more motivated to stay on her positive course.

“Being a mom makes me want to eat healthier, because I want to raise her on proper nutrition so she won’t struggle when she gets older,” Hodges says. “I also want her to see how active I am and want to work out with me. I would love for her to be as happy and healthy as possible.”

At the same time, of course, there’s the new challenge of fitting in workouts — Hodges typically works out six days a week and does low-impact active recovery workouts on Sundays.

Hodges tries to exercise in the morning when her partner can watch her daughter. “It can still be tough, because some nights I don’t get a lot of sleep,” she says. “But I remind myself why I’m doing it and get up.”

As if her workout accomplishments weren’t impressive enough, Hodges is also a crisis text line volunteer and mental health advocate. She uses fitness and mindfulness to help manage borderline personality disorder, schizoaffective disorder, and bipolar disorder. And she talks openly about her conditions with the Openfit community.

“I want to break the stigma surrounding mental health,” Hodges says. “I want to educate people on what mental health is like, and how they can help the people in their lives who struggle or deal with mental illness. I also want others to know they are not alone in this battle.”

Brittany Risher Englert is an accomplished content strategist, editor, and writer specializing in health, mental health, and mindfulness content. After earning her bachelor's and master's degrees in journalism from Northwestern University, she worked at Men's Health, Prevention, Women's Health, Shape, and Greatist before going freelance three years ago. Today she works with brands and publications, helping them create content that engages their audience and builds brand loyalty. Considered a "Swiss Army knife for content," Brittany helps with all things content, from editorial strategy and project management to editing and writing. Her clients include Sonima, Men's Health, Women's Health, SELF, Elemental, ZocDoc, Yoga Journal, Everyday Health, My Fitness Pal, and Centennial Media. Follow her on Twitter.

We spoke to MYX+Openfit breast cancer survivors about their road to recovery, the MYX+Openfit community, an...

How MYX+Openfit Helped New Mom Elizabeth Get Her Confidence Back

Are You Using Negative Motivation to Get Results?

While it might feel that negative motivation works for you, it's not sustainable or healthy long term. This...

We're not shying away from the Monday blues anymore. Instead, here are some Monday motivation quotes to hel...

Fitness Halloween costumes are the perfect look for anyone who's obsessed with being healthy. The best part...

From actors to musicians to athletes, celebrities are inspiring people to aim for fit over gaunt. Please, f...