As funny as those “You had one job” memes are, sometimes accomplishing a single task can be a complex challenge. For example, consider all the pre-workout supplements out there with the sole duty of firing up your routine; most of them offer mediocre results.

Openfit Fuel pre-workout supplement, on the other hand, does the job and does it right — but it’s not easy. The lack of added sugars, artificial sweeteners, or synthetic colors make Openfit Fuel look like a simple solution, but the science behind it is actually fairly complex, as it provides three distinctly different ingredients — caffeine, beta-alanine, and branched-chain amino acids (BCAAs) — at effective levels to help you attack exercise in three completely different ways.

The active ingredients appear simple, but they conceal a host of perks and processes.

Because caffeine’s among the most effective, safest, most widely-used ergogenic aids around, adding it to Openfit Fuel was a no-brainer. Which is ironic, considering the brain is exactly where this stimulant does its best work.

Adenosine is a chemical existent throughout your body, including the brain where it slows nerve cell activity, causing fatigue. Working out increases adenosine, but caffeine blocks it, therefore helping delay fatigue and increase endurance. It also helps improve attention and cognitive performance, making it a great solution for sports that require quick thinking, like basketball and speed chess.

And contrary to what you might think, you don’t need to overdo caffeine to reap its benefits. Plenty of research, including studies on runners and cyclists, show that low-dose caffeine is just as beneficial. A scoop of Openfit Fuel contains 100mg of caffeine from green tea and coffee bean extracts. That’s about as much as you’ll find in an 8-ounce cup of coffee. 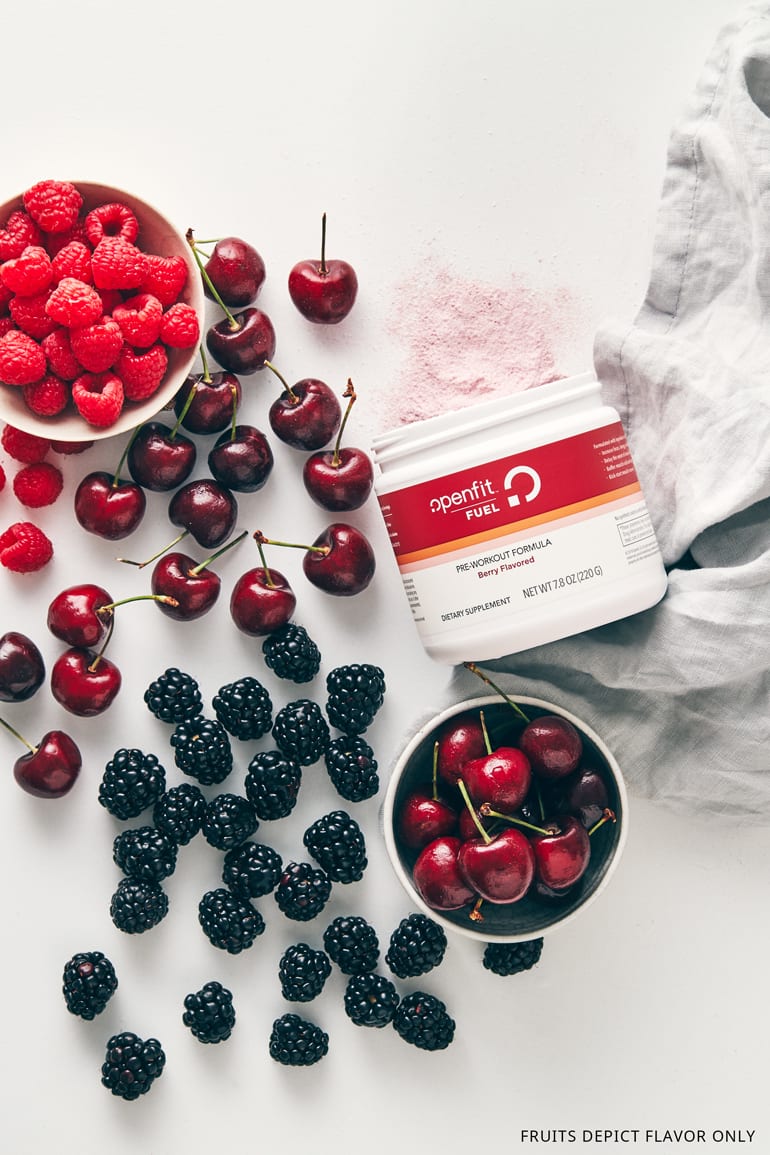 Beta-alanine is a non-essential amino acid found in muscle, where it converts into carnosine, which helps buffer muscle acid that’s created when you exercise. In other words, it helps reduce the stuff that builds up in your muscles and makes them tired.

You may be wondering if it would be better to cut out the middleman and just supplement with carnosine, but thanks to some evolutionary hiccup, your body breaks down carnosine into beta-alanine when you consume it anyway. So you’re better off saving a step.

Much like caffeine, there’s plenty of compelling research supporting the impact of continued beta-alanine use on exercise performance. Note the “continued.” Caffeine works acutely, meaning you take it, you get fired up, it wears off, game over. (And hopefully game victorious.) On the other hand, beta-alanine builds up in your system, so it really works best if you use it consistently.

One interesting side effect of beta-alanine is that it can make your skin temporarily tingly. This effect usually subsides within 30 to 60 minutes. This might be a little disconcerting the first couple of times. But after a while, it just becomes a cool reminder that your Openfit Fuel is working and you’re ready to rock.

Leucine, isoleucine, and valine are three essential amino acids collectively known as branched-chain amino acids (BCAAs) because of their chemical structure. BCAAs are unique in that muscles can oxidize them for use as energy, although the vast majority of your energy needs are satisfied by carbohydrate and fat oxidation.

In addition to functioning as a fuel source and, like other amino acids, supplying building blocks for muscle, BCAAs do a good job of stimulating muscle protein synthesis to help support muscle growth and repair. This benefit isn’t all that surprising given that 35 percent of the essential amino acids in muscle protein are BCAAs.

What Does Openfit Fuel Pre-Workout Supplement Do? 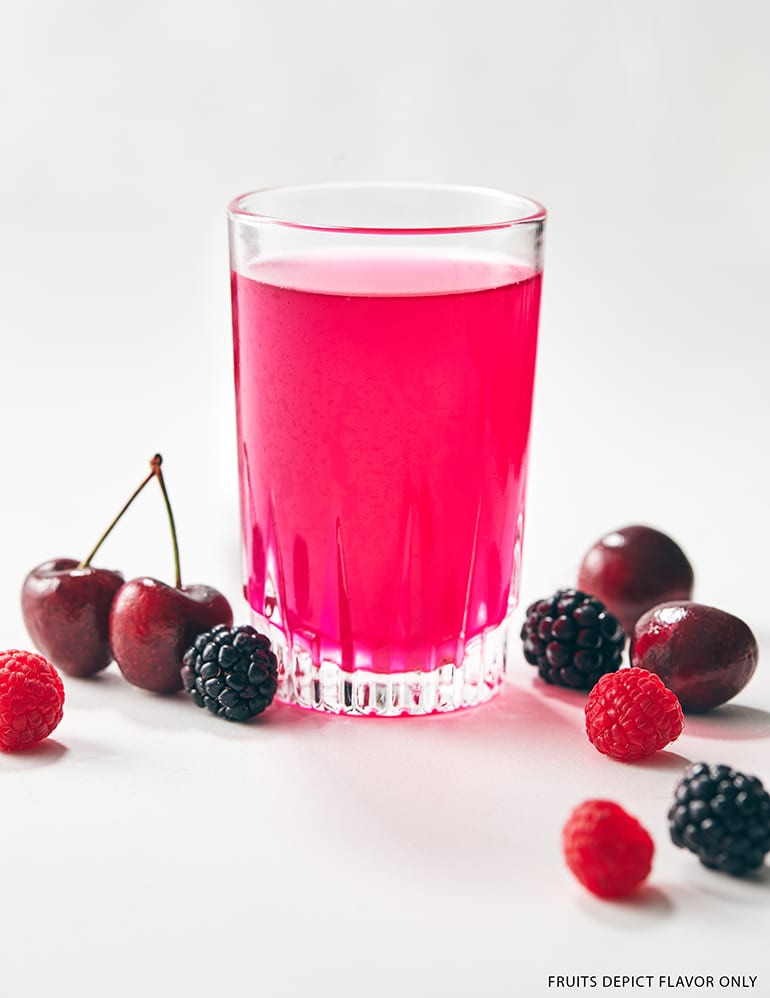 What you don’t get is added sugar. There are times before a workout when a little sugar is a good thing. For example, if you’re doing longer, high-intensity training first thing in the morning before breakfast, 100-or-so calories of simple carbs may give you the extra energy you need to avoid “bonking,” or running out of blood sugar and glycogen, mid-workout.

But provided you’re eating right, your blood sugar should be fine during shorter workouts. Or it may be that you simply don’t like added sugars and would prefer to get your carbs from whole food sources such as fruit. (The Spartans ate figs for their pre-workout sugar and that seemed to work pretty well.)

With Openfit Fuel pre-workout formula, you get to decide how you’re going to nutritionally prepare for your workout. Take it straight, mix it with juice, or down it with a banana chaser. Your choice. Either way, rest assured Openfit Fuel will do that one job it’s supposed to do — and it’ll do it right.

Energize Your Exercise with a Pre-Workout Caffeine Supplement

Pre-workout with caffeine is a popular supplement for many people allowing them a boost of energy before wo...

Curious about workout supplements? Adding them into your exercise routine can have a ton of benefits! Here'...

After a punishing workout, Openfit Recovery post-workout supplement gets to work, helping to speed muscle r...

Energize Your Exercise with a Pre-Workout Caffeine Supplement

Pre-workout with caffeine is a popular supplement for many people allowing them a boost of energy before wo...

After a punishing workout, Openfit Recovery post-workout supplement gets to work, helping to speed muscle r...

Curious about workout supplements? Adding them into your exercise routine can have a ton of benefits! Here'...

Xtend Barre is a 30-minute cardio mix of Pilates and ballet barre proven to sculpt a lean, strong physique....

Raising the Barre: Get to Know Andrea Rogers, Creator of Xtend Barre