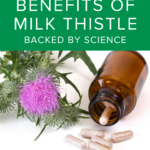 Can a plant that was anciently thought to treat snake bites help you stay healthy? If you’re talking about milk thistle, a prickly plant with bright purple flowers, the answer might be yes! It’s been used for over 2,000 years as an herbal remedy.

And now, a growing body of research shows that taking this plant as a supplement may assist in keeping you healthy, but it’s not always easy to separate scientific fact from fiction. So we enlisted the help of experts to find out everything there is to know about this plant, what the actual milk thistle benefits are, and what it can (and can’t) do for your body.

What Is Milk Thistle?

A native plant to Southern Europe, the Middle East, and Asia, milk thistle is derived from compounds found in Silybum marianum, a plant that’s in the same family as sunflowers and daisies.

Back in the 1500s, John Gerard wrote that this plant was “the best remedy against melancholy.” While that exact milk thistle benefit is a bit up in the air these days, there are some other benefits that are more bound in science.

Milk thistle gets a lot of attention for how it affects the liver. In fact, most of the modern research into the supplement revolves around how it can help support liver function.

“Milk thistle helps reduce deposits on the liver which can hinder the liver’s ability to do its job converting hormones and filtering toxins and pesticides, to name a few,” says Sara Chana Silverstein, RH (AHG).

It’s theorized that it can also support healthy liver function by ameliorating oxidative damage and modulating inflammatory response. A 2016 study found that it did just that with mice, but “there needs to be more research on humans to determine if milk thistle has real benefits for liver disease,” according to Silverstein.

Until that time comes, it should only be used as complementary — not the primary way — to promote healthy liver function.

Estrogen — a sex hormone known to help keep bones strong and prevent bone loss — drops after menopause, which can lead to osteoporosis. A 2013 study found that milk thistle helped promote healthy bones in estrogen-induced deficient mice, but more studies are needed to know if it can have the same effect on bones caused by other factors. 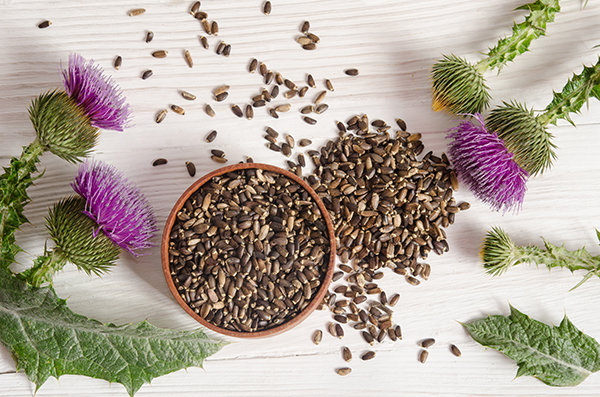 Milk thistle might be able to help alleviate temporary inflammation caused by allergies. A 2011 study with 60 people who had allergic rhinitis (common allergies) found that those who were treated with silymarin and routine antihistamines showed improvements after a month, and saw an increase in antibodies. However, the study notes that the best bet for helping manage allergies is to combine it and other medications.

While John Gerard believed milk thistle could help support a positive mood, there aren’t any reliable, recent studies that prove it. However, a cognitive issue that this plant does show promise in is helping reduce age-related mental decline. Studies conducted on rats show it can help guard against oxidative stress that can impact brain cells.

Can milk thistle help you get clearer, younger-looking skin? Possibly. One 2012 study found that people who took 210 milligrams of silymarin — the active compound in the plant— over eight weeks reduced the number of acne lesions on their skin by more than half.

Then, a 2015 study found that milk thistle helped reduce inflammation when applied topically to the skin of lab mice, but more research is needed to determine the effect on humans.

Is Milk Thistle Safe to Take?

If you’re worried about milk thistle side effects, it seems to be safe when you take it orally, but that doesn’t mean you should just blindly trust any supplement.

“It is generally safe, although people with specific health conditions, or those who are pregnant or breastfeeding, should still check with their doctor before taking it,” says Richards.

Where to Buy Milk Thistle

Milk thistle supplements are available in brick-and-mortar stores, like Whole Foods, or online websites, like Amazon. You can get the supplement as a capsule, liquid, powder, or tea. Here are a few options to get you started if you want to add this into your supplement routine.

Milk thistle is most commonly found in capsule form. Jarrow Formulas comes with 150 milligrams of the herbal ingredient in a capsule. Buy it on Amazon.

Add a scoop of Micro Ingredients Milk Thistle Powder to a smoothie to get your silymarin and the same benefits as a capsule without having to swallow pills. Buy it on Amazon.

Relax with a cup of tea and get your milk thistle at the same time with Buddha Teas Organic Milk Thistle Tea. Buy it on Amazon.

The Bottom Line on Milk Thistle

Milk thistle may help with temporary inflammation and may help fight free radicals in the body, which could potentially help keep you healthy. However, much of the current research on the plant was conducted on animals, not humans.

Your best bet: Only take the recommended amount listed on the label — and be sure to get the go-ahead from your doctor before starting a milk thistle regimen.