Is Metabolic Adaptation Keeping You From Losing Weight? 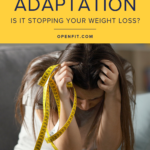 The formula is supposed to be simple: Burn more calories than you consume, and you’ll drop pounds in no time, thanks to a metabolism that runs faster than Usain Bolt.

What gives? It may be that your body is adapting, either to the decreased number of calories you’re eating or the increased number you’re burning through exercise, a concept experts often refer to as metabolic adaptation.

Can you get over the hump and continue your weight-loss journey? Yes, but first you must understand why metabolic adaptation happens in the first place.

What Is Metabolic Adaptation?

When you lose weight through dieting and exercise, your metabolism eventually slows down — or adapts — to match your new lower body weight.

That means to lose more weight, we need to eat even fewer calories, expend more energy, or do a combination of both. Why? Well, our bodies are pretty darn good at keeping us alive. When we keep the number of calories we’re eating low, our body wants to cling to what it has in order to survive — a holdover from the days when people primarily had to hunt and gather their food themselves.

Reality television can offer an example of metabolic adaptation in action. A 2016 study published in the journal Obesity followed 14 former contestants from the long-running NBC show The Biggest Loser. The study found that contestants who lost a lot of weight typically burned fewer calories than similar-size people who hadn’t lost weight. The researchers also found that, in the six years after appearing on the show, only one former contestant had successfully kept the weight off — and all contestants had lower metabolic rates than other people of similar size.

How much lower? According to the study, these contestants would have to consume an average of 500 fewer calories than people of similar size to avoid gaining weight. Despite substantial weight regain in the six years that followed, their RMR remained at the same level as it did at the end of the show.

Can You Reverse Metabolic Adaptation?

“It’s a common misconception that you have no control over your metabolism” adds Carolyn Dean, M.D. What you eat, how you exercise, and your hormone balance have a big impact on how your metabolism functions.

So, does metabolic adaptation prove that the number of calories we eat doesn’t matter? No, calories definitely do matter — it just means that weight loss is more than just calories in versus calories out. Start by looking at the macronutrient balance of your diet, recommends Dr. Yancy.

“Research has shown that a lower carbohydrate and higher fat and protein diet can lead to less reduction in RMR during weight loss,” he says.

Also, be sure you’re getting enough sleep, and limit stress in your life whenever possible to optimize your metabolism.​​

“Sleep is another metabolism mediator,” adds Dr. Dean. “If your body is very tired, it will be harder for it to create energy and lose weight. Consistent rest will keep you strong and ensure that your body has the strength to be productive and boost weight loss.”

Most importantly, know that metabolic adaptation doesn’t mean you lack willpower — it is simply a biological response, not a hopeless situation. According to Dr. Yancy, research shows that cardiovascular workouts — along with resistance training to build muscle mass — can increase RMR and help with further weight loss.

“The body might adapt to this new RMR level over time,” says Dr. Yancy, leading to more of what you want: continued, sustainable weight loss.

The Takeaway: Your metabolism will adapt to weight loss, but that doesn’t mean you’ll gain it all back or stop shedding pounds. Getting enough sleep, managing stress, and continuing or even upping your cardio and strength workouts will help you overcome metabolic adaptation and keep your goals in sight.