"Strength Is for Everyone”: Meet Openfit Trainer Kelsey Heenan 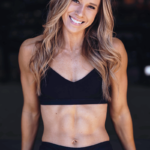 Everyone’s fitness journey is unique, and none are without their fair share of setbacks and hurdles. To truly dedicate yourself to not only getting fit, but doing real good for your body and mind, it helps to have someone in your corner who can motivate you and empathize with you.

Perhaps no one embodies that more than Kelsey Heenan.

Train with Kelsey as she pushes you to discover new strength in her Get Strong program on Openfit. Try it here for free!

Growing up in a sports-fanatic household in Minnesota where, Kelsey says, her mom “always has a game on,” Kelsey found that organized sports helped her overcome early childhood shyness. Her love of basketball took her to Vanguard University in Orange County, California. While Vanguard wasn’t as big as nearby schools like Stanford and UCLA, Kelsey immediately connected with the high level of competition. “We’d play against some of the best teams in the nation,” she says.

Around the same time, Kelsey began struggling with anorexia and exercise bulimia. As she explains on her site The Daily Kelsey, “My heart rate was so low, my doctor said I couldn’t even go for a brisk walk or I could have gone into cardiac arrest.”

Over the course of a few short years, Kelsey began her journey of recovery, which led to her becoming a certified nutrition coach and MBSC functional strength coach, starting her own fitness business, and becoming a coach and mentor for others looking to have a healthier and happier approach to life — beyond just physical gains. She joined Openfit in 2021 for her popular HIIT and strength-training program 4 Weeks of Focus.

Her next feat: Get Strong with Kelsey Heenan, in which she’s hoping to impart the importance of strength training in anyone’s fitness journey (and of course, how to have fun doing it!). Having been through so much herself, Kelsey takes a holistic view of fitness. 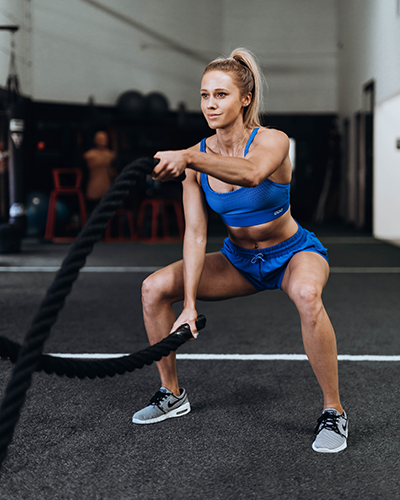 OPENFIT: When did you make that switch from “I’m getting fit for myself” to “I want to help do this for others”?

KELSEY HEENAN: It was 2014. I was getting all my certifications while I was still working at a school district. (I went to school to do social work.) But after a while, I realized I really missed focusing on fitness and strength and the movement. And so I transitioned more into fitness after that. It’s really allowed me to continue just to help other people find and create confidence in who they are.

You’ve described yourself as a “Type A” personality — can that sometimes be a detriment to getting involved in fitness?

Absolutely. And that was really my downfall when I got sick, because I was so “by the book.” I had a lot of perfectionistic tendencies. Eventually, I started making these arbitrary rules that didn’t make any sense, but I had to follow them. And that’s where it’s kind of a slippery slope.

After going through treatment and recovery and improving my physical and mental health, I realized that fitness and strength allow me to be who I am. So I try to help people create a middle ground in their lives — where they can not only be fit and eat healthy, but also relax and enjoy life and take days off and eat doughnuts and pizza, and all of those things.

Speaking of setting arbitrary rules, are there some common misconceptions that people have when you start working with them that you have to sort of un-teach them?

[And] a common belief that comes up for a lot of women is fear around strength training, because they feel like if they lift weights they’re going to get super bulky and blow up like the Hulk. [But] it’s just a myth – it’s not the truth.

What was the inspiration behind Get Strong?

Creating Get Strong was an incredible opportunity, because I wanted to continue building on a lot of the things that I had created in 4 Weeks of Focus and help people to be able to keep making progress.

You wanted people from the Openfit community to join you on this journey. Talk a little bit about your decision to go that way.

I am so overjoyed that we have been able to build a cast of community members from Openfit! It’s a really amazing opportunity because we’re all real people. And all these people in the community have amazing, wonderful lives. So, it’s a really cool opportunity to be able to hang out together and train together.

And having people on the cast to be able to modify was essential, because we are all different. Because of that, there are different variations we should do based on where we’re at in our physical fitness based on just what feels best for our body. 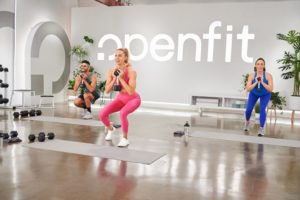 Has your own personal experience helped you motivate others?

Not everyone is going to have a very severe, restrictive eating disorder, but I would bet if we were to survey the world, 99% of people would say they struggle with their relationship with their body.

And they do question the foods that they eat, and they do feel guilty from time to time, so being able to understand that on a really, really deep level has allowed me to be able to communicate with them in a better way, where I’m not just yelling at them to work harder. That’s not going to help them in the long term.

What are the little ways you can help with the mental side?

I’m very careful in my language to be gentle and empathetic because I know what it feels like to have people speak about their bodies and about food in a negative way. I avoid saying things like a food is “allowed” or “not allowed.” Calling a food “good” or “bad.” Or “clean” or “dirty.”

It’s not like people have bad intentions at all, but the psychology of that is just so fascinating. If you say that a food is good or bad, people begin to think, “OK, I’m good. But if I eat that I’m bad, I’m a bad person, I’ve failed today.”

“Cheat meal” is another one that I don’t use. I use the word “flex,” being flexible with your food choices. It’s not bad…food is meant to be enjoyed. 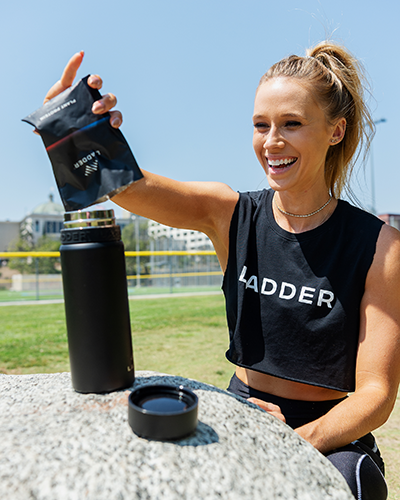 I use LADDER products literally every day. I love the chocolate flavor. I mean, because chocolate is life, of course. I mix it with some yogurt, granola, berries, and of course chocolate chips. And it’s a really nutritious dessert.

I think people understand that [fitness and nutrition] are interconnected, but I think it’s really hard for people to understand that a healthy relationship with food and exercise is probably more important than finding the best workout plan or getting six-pack abs.

For her latest program "Get Strong With Kelsey Heena", Kelsey tapped into the Openfit community, recruiting...

Here’s What Kelsey Heenan Eats in a Typical Day

Kelsey Heenan, Openfit Trainer and mind behind 4 Weeks of Focus takes us through her "What I Eat in a Day."

Fitness victories are not always about scale-based results. We spoke to 4 Weeks of Focus community members ...