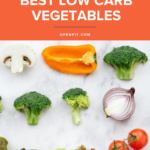 The pressure to cut carbs is so pervasive in diet and nutrition circles that the concept of a “low carb diet” is expressed almost with a shrug. As in, “yeah, of course you should adopt a low carb diet.” It’s all made to seem so obvious, except when it comes to where to start. Does this kind of diet mean you need to go low-carb with everything…even low carb vegetables?

If you are trying to limit your carb intake, opting for lower carb veggies is one place to start. And luckily, many of your favorite (hopefully) vegetables do pretty well in terms of lower carb content! Here’s a list of low carb vegetables, with some reasons why you should be loading up your plate with these nutritious plants, and a handful of tasty recipes that you can add to your healthy meal prep plan!

The trendy and ubiquitous vegetable is popular for good reason. One cup is super low in carbs, and kale is high in vitamins K and C. Vitamin K is important for bone health and blot clotting functions. Vitamin C is important for proper immune function and skin and connective tissue health.

Plus, there are plenty of ways to enjoy this leafy green! Eat it raw as salad base, turn it in to kale chips for a crunch snack, or roast, sauté, braise, and grill the leaves whole.

Full of vitamins A, C, E, K and B6 as well as magnesium, potassium, iron, and calcium, spinach is every bit the powerhouse Popeye always told you it was. It also has barely any carbs – you can chomp down on a whole cup of these green leaves for just slightly over one gram.

“Spinach is great raw, quickly sautéed, or blended into smoothies,” says Cameron Fiorenza, BS-NDTR, Openfit’s Culinary and Nutrition Specialist. Sneak it into your next dinner party with a healthier spinach dip, or get a little funky and bake it into muffins!

Three cheers for the fan-favorite fungi! Mushroom powder has become super trendy recently, but whole, non-pulverized mushrooms shouldn’t be overlooked as a go-to veggie! All mushrooms have slightly different nutritional values, one cup of most kinds will stay under 4 grams. For example, one cup of white mushrooms comes in at 2.28 grams of carbs, morel at 3.37 grams, brown mushrooms at 3.47 grams, and portabella at 3.87 grams.

If you’re looking for something crunchy to snack on while you’re on a low carb vegetable quest, pick up a few stalks of celery. Not only is it light on carbs, but one cup will only set you back 14 calories! And thanks to its high water content, it can be pretty hydrating, too.

Is celery not your jam? No worries! Cucumbers are another refreshing and crunchy snack that fair pretty well on this list of low carb veggies. They’re also low in calories —(about 15 calories per cup with the peel), have a high water content, and are a good source of vitamin K.

“They’re great raw, grilled, and even thrown into smoothies and shakes,” Fiorenza says. He also suggests using them as an ice alternative by chopping peeled cucumbers and then freezing them for a full spa-like experience.

If you’re looking for a low-carb substitute for noodles, look no further than zucchini! “Zoodles,” AKA zucchini noodles, are a solid swap for a pasta base. One cup of chopped zucchini has less than 4 grams of carbs and only 17 calories, so you can enjoy a lot of it — in zoodle form or otherwise — without it weight you down!

This squash can also serve as a makeshift taco in these 4-ingredient turkey zucchini boats, and you can even add the veggie into a morning dish, like a zucchini noodle breakfast bowl!

If you’re tired of the same old chicken and broccoli routine for your meal prep, try swapping in asparagus, instead! It’s easy to roast in the oven, and it actually offers more antioxidants than broccoli. “They’re also an excellent source of vitamin A, good source of fiber, vitamin C, and iron,” Fiorenza adds.

If you want to get creative, try asparagus in this this low carb breakfast recipe!

Not many foods have has as big of a glow up as cauliflower. These days you can find it everywhere, whether it’s as pizza crust, low carb bread, a base for nachos, or rice. And it makes sense why it’s become so prominent! It’s a great veggie substitute for foods that would normal be high in carbs, thanks to its composition and ability to transform into make textures.

One cup straight will give you just over 5 grams of carbs. There are a nearly endless number of ways to enjoy it, so get started!

A member of the cabbage family, one cup of broccoli will only set you back 6 grams of carbs, and it will give you tons of nutritional goodness like fiber, potassium, and riboflavin.

“It’s great served raw, blanched, stir fried, or turned into broccoli rice,” Fiorenza says. And if you’re having trouble getting your kids (or yourself!) to enjoy this green machine, try sneaking them into broccoli tots for a delicious and healthy snack.

Although Brussels sprouts clock in a bit higher on the carbs list than most of these veggies, you can cram a lot into one cup. Plus, they offer up a lot of positives when it comes to nutritional components! “They’re great source of vitamin A, C, a good source of potassium, fiber, vitamin B6, and iron,” Fiorenza says.

You can try preparing them in a number of ways to find what you enjoy best. They’re great roasted, steamed, blistered, shaved for a salad base, or even wrapped in turkey bacon!

“Botanically, an avocado is a fruit because it’s a large berry with a seed in the middle,” explains Fiorenza, but it often is referenced as a vegetable. It’s pretty high in carbs for this list — just a half a cup will get you close to 10 grams — but a little avocado goes a long way. It’s loaded with healthy fats, vitamins and minerals, and – if put on toast – it’s able to destroy the economy.

But all kidding aside, avocados are packed with nutrients that can assist with cardiovascular health, weight management, and even healthy aging. Turn it into guac or add it on top of a salad, but whatever you do, learn how to store a cut avocado correctly so you don’t waste it!