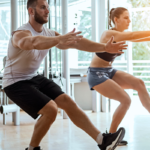 If you want to build stronger legs, don’t overlook the importance of learning a little bit about your leg muscle anatomy. No, you don’t need a degree in biology to build a great physique. But a basic understanding of the muscles in your legs can help you understand which exercises will be most effective — and which are an injury waiting to happen or a flat-out waste of time.

At the very least, you’ll understand exactly what an instructor means when they say, “Feel this in your quads.”

Ready for a guided tour of your the upper and lower leg muscle anatomy? Read on.

Get a killer leg workout while sculpting a lean, graceful body with Xtend Barre on the Openfit app. Try it here!

The quad muscles— which form the meaty mass on the front of your thighs — are among your strongest muscle groups, and play a critical role in athletic activities. Together, these muscles straighten your knee, stabilize your knee joint, assist in flexing your hip (drawing your knee towards your chest), and help absorb force when you land after jumping or leaping.

True to their name, the quads consist of four major muscles:

“People try to isolate the individual quad muscles, but they’re all controlled by the same nerves,” says John Rusin, DPT, a physical therapist and elite fitness coach. “That means they all activate at the same time. Some key exercises for the quads include any movement where your knee extends under resistance—especially all types of squats, lunges, and split squat variations. (Rusin recommends the Bulgarian split squat in particular.)

Located on the back of your thighs, your hamstrings perform the opposite function of the quads, bending your leg at the knee joint and assisting your butt muscles in extending your hip joint, pushing your thigh backward.

Each time you take a step, the hamstrings move from a stretched position to a contracted position. During a hard run, this happens in a split second. If the hamstrings aren’t strong, this fast contraction can lead to injury.

There are three hamstring muscles, all of them originating at the ischial tuberosity (the bones you sit on):

“Unlike the quads, the hamstrings are activated by different nerves,” says Rusin. “So it’s possible to emphasize different hamstring muscles by altering your foot positioning.” A narrower stance on a stiff-leg deadlift, for example, targets the outer hamstrings, whereas a wider stance targets the inner hamstrings and adductors.

Effective hamstring exercises often work the glutes in conjunction with the hamstrings. Some good examples are hip thrusts, hyperextensions, bridges, and deadlifts of all kinds.

When it comes to the upper leg muscle anatomy, adductors often get overlooked, but they’re a stealth power-player. Their function seems simple: Squeeze your knees together and boom, you’re contracting the adductors.

But adductors also contribute to hip flexion and extension — actions mainly performed by the quads and hamstrings — as well as in turning the thighbones inward and outward. Such versatility makes the adductors crucial in movements like squatting, lunging, running, jumping, and changing direction.

The sail-shaped adductors originate on the underside of the pelvis, and then attach to a line running along your inner thigh.

The adductors work virtually any time your legs are active, whether for standing, squatting, lunging, and most other leg moves. You can work them directly with inner-thigh leg raises and Swiss Ball squeezes.

The abductor muscles perform the opposite function to the adductors, pulling your upper legs away from your midline. Abductors are located on the upper portion of the outside of your thighs and hips, anchoring above on the pelvis, and below at various points on your outside thigh.

Like the adductors, the abductors are also responsible for stabilizing your knees during athletic and everyday movement. When you run, jump, squat, or lunge, for example, your abductors prevent your knees from collapsing inward.

Any time you push your legs outwards under resistance, you’re working the abductors. Banded walks are perhaps the most direct abductor move, but sumo squats, deadlifts, and ballet plié variations are also effective abductor moves.

But you won’t build much muscle mass in the abductors: “These muscles are paper-thin,” says Rusin. “You’re best off training them as stabilizers in single-leg exercises.” That means — yes — more lunges, step-ups, split squats, and the like. 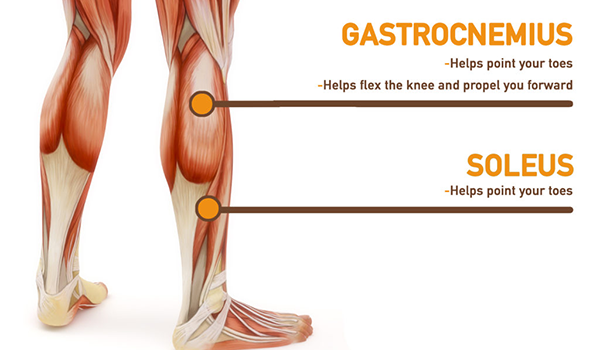 As far as the lower leg muscle anatomy goes, the major muscles include two calf muscles and one shin muscle. They’re responsible, respectively, for extending your foot (pointing your toes) and flexing your foot (pulling your foot towards your shin).

Any time you take a step — whether you’re sprinting downfield or window shopping — these muscles spring into action. Work them with all varieties of calf raises, but be sure to include some standing calf raises: “The biggest calf muscle — the gastrocnemius — works hardest when your knees and hips are straight, and you point your foot as much as possible,” Rusin says. Seated calf raises focus primarily on the soleus.

When's the last time you showed your calves some love? Relieve pain and tightness with these five calf stre...

Crush Your Squat Challenge With This Helpful Guide

Bodyweight squats are great because they're simple and require no equipment. But how many squats a day shou...

Proper stretching of your quads can prevent lots of pain in other parts of your body. If you're looking for...

How Many Calories Do You Burn Using a Rowing Machine?

Rowing can definitely help you burn fat and build strength, but just how many calories can you burn on a...