3 of These Keto Breads Have 0 Net Carbs Per Slice

While we highly suggest whipping up keto bagels or pillowy cloud bread, which has just 2 g of carbs per serving, you may not always have time to make your own substitutes. So, which brands are simply lower-carb and which are truly making keto-friendly bread if you’re shopping at the grocery store? We dug into the nutrition panels for you to sort out which is which.

For more healthy foods to add to your grocery list sign up for Openfit for free today!

It’s worth noting that there are different degrees of the keto diet. Some people believe no grain products can be consumed at all on keto, in which case these breads would not be keto-friendly. But for many, being keto means consuming somewhere between 20 and 50 grams of net carbs (total carbs minus fiber) a day, in which case these products are not only keto-friendly but also welcome additions to banish those bread cravings. 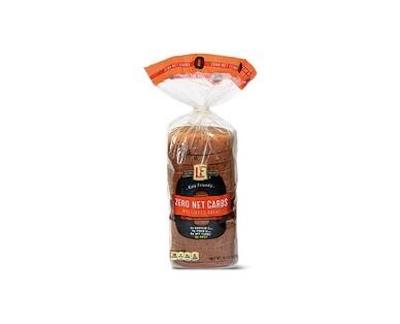 Where to buy it: ALDI

What started as an ALDI Find is now an everyday item due to overwhelming demand that saw these breads sell out in stores and get resold on eBay for steep markups. This ALDI keto bread retails for $2.99 a loaf and, unfortunately, isn’t currently available through Amazon, so you’ll need to head to your closest location. And, based on its popularity, it might be worth calling ahead to make sure it’s in stock.

Where to buy it: regional grocery chains, Kroger, and Amazon.

This bread is admittedly on the higher end of the net carbs scale per slice. But it still fits comfortably into plans that allow 20-50 g net carbs per day. Fat content is considerably higher because this bread is made with a base of egg, almond butter, and cashew butter.

Where to buy it: groceries stories like Hy-Vee and Shop Rite, as well as Amazon.

Thanks to whey protein isolate, each slice of this keto-friendly bread packs as much protein as it does fiber so you’ll keep blood sugar and hunger levels stable. Reviewers say this bread has some chew to it but makes really good toast. Available in plain, cinnamon, everything, honey, rye, and probiotic varieties.

Where to buy it: Midwestern grocery chains throughout Illinois, Indiana, Michigan, and Wisconsin, as well as Amazon.

Of SoLo Carb Bread’s three varieties — Artisan Rye, Country White, and Harvest Wheat — reviewers say Country White is the closest thing to traditional squishy white (e.g. Wonder bread). It may be worth noting that each slice contains 1 gram of sugar alcohols, which have been associated with GI distress when consumed in larger quantities.

Where to buy it: grocery chains such as Hy-Vee, Meijer, Safeway, Albertson’s, and Jewel-Osco, as well as Amazon.

Not to be confused with SoLo, Sola is often subject to questioning over whether it actually qualifies as keto. Again, that depends on which style of keto you’re following, but 3 g net carbs per slice can easily fit into a plan that allows 20-50 g net carbs per day. Sola also offers several varieties of keto-friendly bread: Golden Wheat, Deliciously Seeded, Sweet Oat, and Sweet & Buttery.

Where to buy it: your local Whole Foods, and of course Amazon.

While the other brands key primarily on the low-carb element of keto, Julian also goes heavy on fat content owing to a recipe that boasts eggs, almond flour, and cream cheese. That’s not an endorsement; when following a ketogenic diet, you should be aware of its less healthy aspects, such as the high saturated fat content in some products.

Just two slices provide half the saturated fat you should be eating in an entire day. So consume this bread judiciously, if at all. Julian Bakery makes other products that are keto-friendly despite being labeled “paleo” and not “keto.”

Where to buy it: Wegmans, Key Food, and some Whole Foods locations, as well as Amazon.

If you want a keto-friendly bread that most closely approximates what you’re missing, this might not be for you. But if you like other cauliflower-based products or can’t enjoy traditional keto options that contain gluten, it’s worth checking your local grocer to see if it carries these. Bonus benefit: One four-ingredient slice qualifies as a serving of vegetables.

Where to buy it: Whole Foods, Jewel-Osco, Publix, Kroger, Walmart, and Amazon.

You’re most likely to stumble on this one if you’re in the grocery store since it’s so widely available. There’s just one flavor — Almond and Golden Flaxseed — but reviewers claim it strikes the perfect balance between lightness and density.

Where to buy it: Whole Foods and Amazon.

We hesitated to even include this option because it has more than twice the saturated fat of the Julian Bakery bread, making it an even harder sell health-wise. Ultimately, we left it on the list to present the full spectrum of keto breads on the market.

There are countless negatives associated with a high-fat diet — not least of which being an increased risk of heart disease — and 11 grams of saturated fat per slice is just insane.

That said, while this paleo- and keto-friendly bread carries a distinct coconut flavor, fans say that goes away once toasted. They also say it holds up well under toppings and condiments. But, really, given its outsize saturated fat content, you’re probably best served not finding out for yourself.