Target Your IT Band With These Stretches

If you have tight iliotibial (IT) bands, IT band stretches seem like the logical solution. But dealing with this prevalent affliction (IT band syndrome accounts for 22 percent of injuries to the lower extremities, according to the National Academy of Sports Medicine) is not so simple. Most of the stretches recognized as IT band stretches don’t target the IT band. So if IT band stretches aren’t the answer, what is? Read on to find out!

Stretch all your muscles, tight or not, with Openfit’s Yoga 52 program, try it free today!

What Is the IT Band?

The IT band is a piece of fascial tissue that runs along the outside of the hip and thigh. It begins at the ilium (pelvis) and ends at the tibia in the lower portion of the leg.

“It helps to support your pelvis and your hip while doing things like walking, running, and going up and downstairs so that your leg and knee stay aligned with your hip and the knee doesn’t fall in towards the other knee,” she says. “It also has a huge role in helping the knee to flex/bend and straighten/extend. The lower portion of the IT band changes its function with literally every step we take, helping to straighten and bend the knee.”

How to Stretch the IT Band

It’s not uncommon, especially among athletes and active people, for the IT band to feel painfully tight. So what are the best IT band stretches?

Technically, there aren’t any, says Lauren Lobert, DPT, OMPT, CSCS, owner of APEX Physical Therapy in Brighton, Michigan. “Your IT band is not contractile tissue, like muscle is,” she explains. “Any IT band stretches you find are really just impacting the tensor fascia latae (TFL) muscle,” she says. Located in the hip, the TFL is a small muscle to which the IT band connects.

To stretch and target the TFL muscle, Marko recommends the standing side bend.

You have the option to perform standing side bend pose next to a wall for balance.

Instead of IT band stretches, Marko recommends tissue mobilization or massage for tight IT bands. “You want to loosen the fibers of the IT band, so it stops being so taut and pulling so hard on your bones,” she says.

A physical therapist can administer massage, use a massage gun, or perform cupping, but you can also do self-myofascial release using a foam roller, massage stick, or Marko’s favorite self-massage tool, the tennis ball.

“The tennis ball is a nice size and pressure, acting like an elbow being pressed in,” she says. 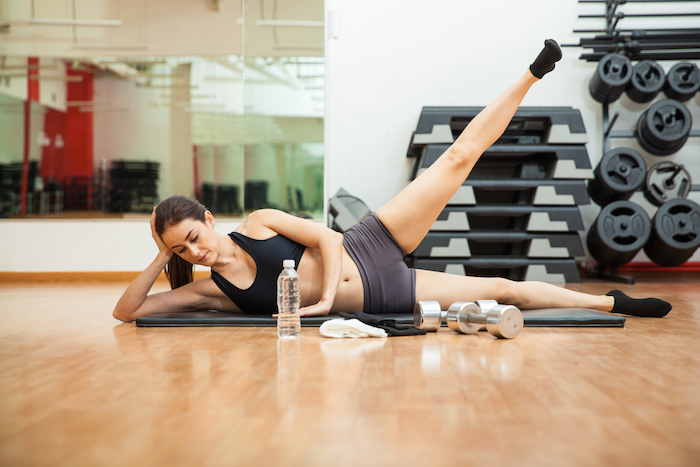 Stretching and massage can help relieve the symptoms of a tight IT band, but if you want to prevent IT band pain, you need to address the underlying issue.

Again, a physical therapist can provide an individualized assessment, but it’s common for people with tight IT bands to have weak gluteus medius muscles. The side-lying leg lift can help strengthen this portion of the glutes.

What Causes a Tight IT Band?

The IT band helps stabilize the hip and knee during activities like walking, running, and climbing. When the muscles around the hip and/or knee are not pulling their weight, the IT band picks up the slack, causing it to tighten. Besides a general feeling of tightness, a tight IT band can also cause pain in the outer knee.

Incorporating strength training, specifically moves that target the glutes, into your exercise routine can help prevent tight IT bands. Also, replace your athletic shoes regularly, as walking or running in worn-out soles may contribute to your tight IT bands.

And if you’re training for an endurance event, take a gradual approach to increase your mileage—drastic spikes in activities like running and cycling can trigger IT band tightness and pain.