How to Do an Incline Dumbbell Press

The bench press has long been considered the ultimate builder of upper-body strength. But there’s a case to be made for its underappreciated cousin, the incline dumbbell press.

In trainer speak, both moves are known as “horizontal pushing” exercises. That means you extend your arms in front of you under resistance, working primarily the chest muscles, and secondarily the shoulders and triceps.

But the incline press may be an equally worthwhile chest-builder as the much-vaunted bench press. For one thing, you’re zeroing in on a specific, and highly visible, part of the chest. “Usually when you hear people talking about working different parts of a muscle — like the lower or upper abs — they’re talking nonsense,” says Trevor Thieme, C.S.C.S., senior manager of fitness and nutrition content for Openfit. But the pectoral muscle is different.

“Each pec has two heads,” he says. “One attaches to your clavicle, and the other attaches to your sternum.” The incline bench press targets the smaller, often underemphasized clavicular head, which isn’t as powerful as the sternocostal head, but is nevertheless key to the muscle’s overall power. Sculpting it with targeted exercises like the incline press can also give your upper body a more chiseled, athletic look.

Because you’re homing in on one part of the muscle, you’ll likely have to reduce the weight you normally use on the flat bench press, says Thieme. That’s doubly true when you’re using dumbbells, it being harder to stabilize two weights than one (like a barbell). But that slight reduction is worth it, as you’ll read in the benefits of the incline dumbbell press below.

How to Do the Incline Dumbbell Press With Perfect Form 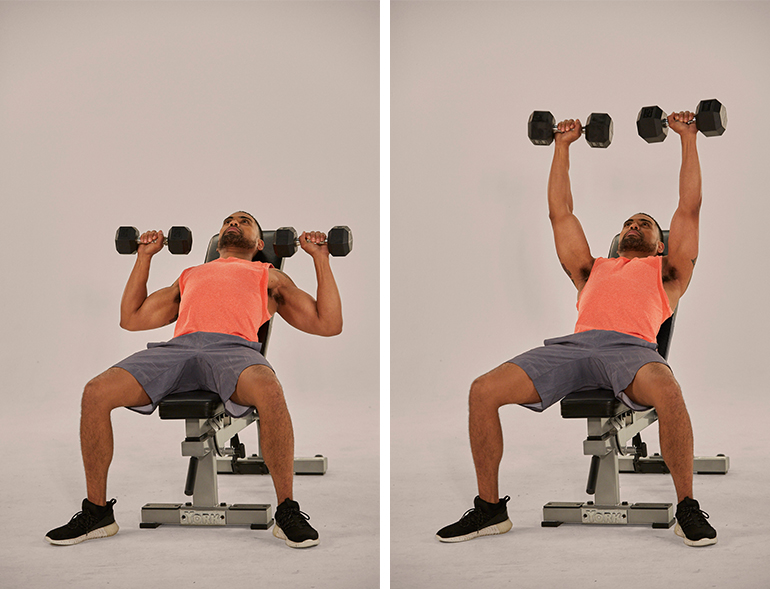 How to Make the Incline Dumbbell Press Harder (or Easier)

“How much should I lift?” is one of the most common questions that trainers hear. Here’s the answer: Use the heaviest weight that challenges you to complete all of your reps with perfect form. In practice, that means reaching for a heavier weight if the exercise feels to easy, and a lighter one if the exercise feels too difficult. Yes, this advice might sound obvious. But enough people overlook it to make it worth stating.

Don’t go too steep with your incline; you’ll change this effective pec builder into more of a front-shoulder builder. Standard is about a 45-degree angle on the bench, but if you’re having trouble with the move, or it hurts your shoulders, lower the incline a bit to get more help from your pecs’ sternocostal heads.

Alter the range of motion

If you only have access to light dumbbells (e.g., because you’re in a hotel gym), you can experiment with one-and-a-half reps, in which you lower the dumbbells fully, press them up halfway, then lower them again before pressing them to arm’s length. “1.5s” double the time your pecs spend in the toughest part of the movement and increase your time under tension, a proven trigger for muscle growth.

When you lower and then lift a weight quickly, you’re receiving a significant amount of help from the “stretch reflex” (the rubber band like tendency of a muscle to spring back to a shortened state when stretched). By taking three to four seconds to lower the weight, you eliminate the stretch reflex, and make the exercise harder in the process.

Benefits of the Incline Dumbbell Press

Compared with its barbell equivalent, the incline chest press forces each pectoral muscle to work independently, so your strong side can’t compensate for its weaker counterpart. That forces your weak side to work as hard as your strong side, helping to prevent and correct muscle imbalances.

Also, a recent study found that dumbbell presses lead to more activation of the pectoral muscles than barbell presses.

Finally, when doing the incline bench press solo, dumbbells are safer: if your muscles fail while pressing a barbell, you risk getting pinned under the bar — a rare but real outcome of solo training that occasionally injures (and in some rare instances, kills) lifters. Fail on the incline dumbbell bench press, however, and the only risk you incur is a chip in your floorboards when you dump the weights.

What Muscles Does the Incline Dumbbell Press Work?

The incline bench press primarily targets the pectoralis major, a muscle with two heads that originate separately at the clavicle and sternum before fusing together and attaching to your humerus. Its major functions include raising your upper arms (as required during pressing movements), turning them inward, and bringing them toward the midline of your body (think: bear hug or dumbbell fly). Buried beneath the pec major is the pectoralis minor, which helps pull the shoulder blade down and forward.

On the back of your upper arms are the triceps brachii. You have one per arm, and each is comprised of three heads — one originates at the scapula, two originate on the upper humerus, and all three fuse together to attach to the top of your forearm. Its function is to extend your elbow.