How to Improve Your Running Form

Running form isn’t something most people think about. Much like walking and swimming, you most likely run without dwelling on the details. After all, you’ve been running for nearly your entire life — and even if practice doesn’t make perfect, it certainly makes good enough.

But if you want to kick butt in your next 10K or start exploring just how far and fast you can go, you’ll need more than a “good enough” technique. That’s where proper running form comes in.

What is good running form? The answer is different for everyone. “There is no one right way to run,” says Janet Hamilton, CSCS, founder of Running Strong Professional Coaching in Atlanta. “We’re all born to run, just like all dogs are born to run — and some people are greyhounds and others are basset hounds.”

Everyone has their own distinct biomechanics, as well as an ideal stride that’s as unique as their signature. “You run the way you do because of a complex interaction of anatomical structure, strength, flexibility, terrain, speed, and even fatigue status,” Hamilton says.

But you can still take steps to make your biomechanics more efficient — and doing so is well worth your effort. Here are 7 tips for achieving proper running form.

TIP: When following the steps below, take it slow. Overthinking how you run “can lead to poor running economy, because your motions won’t be fluid,” says Hamilton. Focus on incorporating one or two tips at at time, until they become second nature. And be patient — even if you’re a basset hound, you might soon find yourself keeping up with the greyhounds.

1. Keep Your Head Up

Focus on the horizon, not your feet. That will help keep your head in a neutral position, minimizing not only the stress on your spine, but also your perceived effort, according to a study in the International Journal of Exercise Science.

“Many runners pull their shoulders up,” says Justin Freyermuth, CSCS. Don’t be one of them. Tense shoulders are a waste of energy. 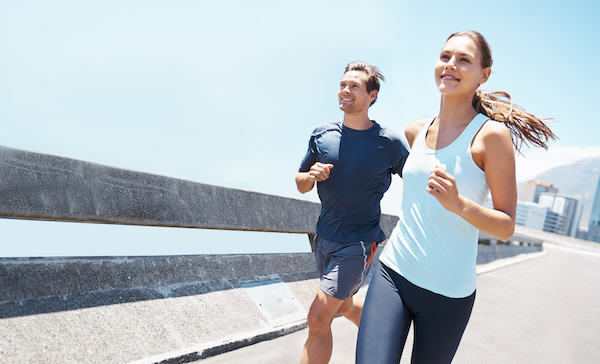 Bend your elbows 90 degrees (or less), and move your arms forward and backward, not across your body. “That will allow for a faster swing, which in turn will lead to a faster leg turnover,” says Freyermuth.

If your hands are clenched in fists, you’re leaking energy. Instead, keep them gently cupped. “Imagine you’re holding a potato chip in each hand,” suggests Janet Hamilton, CSCS, founder of Running Strong Professional Coaching in Atlanta. 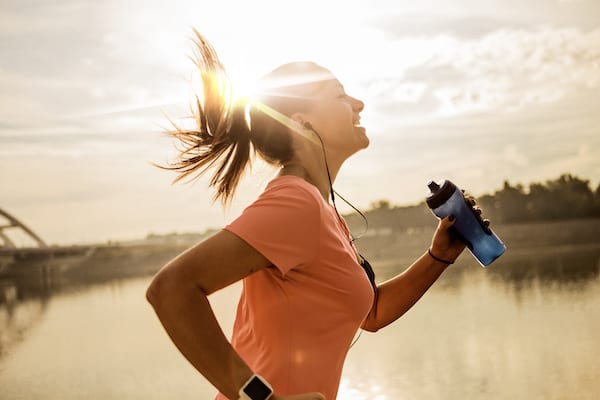 Maintaining a slight forward lean with your entire body (i.e., from your ankles, not your hips) can not only boost running efficiency, but also reduce the loading on your knees, lowering your risk of injury, according to researchers at the University of California, in San Francisco. Hunching, bending, or otherwise rounding your torso has the opposite effect. “You should have a comfortably tall posture—no exaggerated positions,” Hamilton says.

“Focus on pulling your heel towards your glutes rather pushing forward with each stride,” says Freyermuth. That will increase the height of your knee drive as you swing your leg forward, maximizing your power. “It will also help prevent over-striding, which is a common running mistake,” adds Freyermuth.

Don’t overthink how your feet land. At faster paces, you might turn to a mid- to forefoot strike to increase your speed. But if you’re a heel striker, don’t stress too much about it — heel strikers don’t have a greater risk of injury, according to a study by the United States Army Research Institute of Environmental Medicine in Massachusetts. In short, just work with your natural foot strike.

Focusing on correct running form can help you get better at running in a few different ways: