The Impossible Burger: Is It Any Healthier?

A truly tasty burger made entirely from plants has been promised for years. Rumblings of the imminent release of a ground beef alternative became reality in 2016 when the Impossible Burger was launched, following up on the successful stocking of the Beyond Burger in grocery store meat sections.

The thinking behind creating these meat analogues, experts argued, was that consumers would not only be given an easier way to switch to a healthier diet focused more on eating plants than animals, but would also save tons of CO2 emissions and help combat climate change and environmental destruction.

Now that plant-based “beef” products finally boast a meaty, juicy taste that carnivores can truly sink their teeth into, the fast food industry is taking notice. The Impossible Burger has been slowly been rolling out (check here for locations near you) across the U.S. since its debut, and Beyond Meat offers ground beef crumbles and sausages at over 33,000 grocery stores (go here for locations).

Beyond entered the fast food market in early 2019, and its patties are now available at Carl’s Jr. locations nationwide. The company also announced that it’s offering Beyond Tacos in all locations of national Mexican fast food spot Del Taco.

And now Burger King — a fast food burger behemoth with over 13,000 locations — has added an Impossible Burger to its menu. After a brief test phase in 59 locations in and around St. Louis, Missouri, the company has announced full deployment of the Impossible Burger throughout the U.S.

What’s in the Impossible Burger?

Most of the focus for the first true, flavorful meat equivalent has centered on the humble, but ubiquitous, hamburger. That’s because in the U.S. alone, people eat, on average, three of them per week. Eaten at home, fresh off the grill, sizzling out of the pan, or more likely, in the millions of fast food joints that litter the landscape, that totals approximately 50 billion burgers each year.

The problem though, was that every new iteration of the fake patty didn’t quite cut it. Sure, they tasted better than mealy, dry “burgers” made from black beans or soybeans, but the flavor and mouthfeel wasn’t enough to fool burger aficionados and dedicated carnivores.

Impossible Foods, however, decided to break down animal meat to minuscule molecules in order to figure out how and why it tastes so delicious to most humans. The company spent over six years studying animal muscle to develop its first product, the Impossible Burger. In 2019, Impossible Foods revamped its original recipe, which includes:

Other nutrients added to the Impossible Burger include vitamins (E, C, and B complex), salt, and minerals (zinc, iron).

All of the Impossible Burger’s ingredients are derived from “natural” foods considered safe by the Food and Drug Administration (FDA). But added up they won’t give you the true “meaty” taste that carnivores crave; that comes from the addition of a special molecule called “heme.” It’s found in every plant and animal cell — though in higher amounts in animals — and is a part of hemoglobin, the protein that transports oxygen throughout your body via your blood.

Heme is also what gives animal meat its delicious juicy and slightly bloody taste and gets your saliva glands going when the sizzling and popping of cooked meat releases tempting aromas. So Impossible Foods searched for a plant version of heme that it could use to legitimize its “meat.” The company came across leghemoglobin, which is found in soy and is safe to eat. Plus, it makes food derived from plants taste just like meat when added into the mix.

Impossible Burger vs. Beyond Burger

Impossible Foods’ and Beyond Meat’s stated missions are comparable. They’re each dedicated to producing plant-based food that tastes like meat to both help with the environmental pressures created by raising livestock, and to provide healthier alternatives to die-hard carnivores.

While Beyond Meat’s products are similar to Impossible Foods’ — mainly because they’re both made of plant-based ingredients — Beyond doesn’t use heme to achieve a meaty flavor and aroma. Beyond also eschews soy protein, gluten (like from wheat), and GMO ingredients, focusing instead on packing its “meat” with primarily pea protein and beets, which gives it a juicy red, “bloody” color.

The company also mixes in stuff like canola, coconut, and sunflower oil as fats, cellulose and methylcellulose for fiber, potato starch, and gum arabic to make its meat analogue complete.

So Is the Impossible Burger Healthier Than Beef? 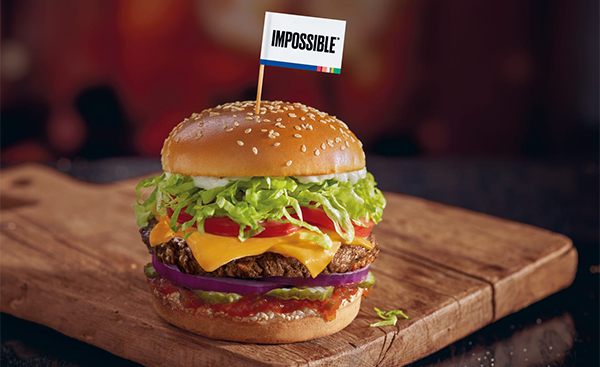 Though, yes, it is technically “healthier” than a similar ground beef patty, the Impossible Burger has a few concerning areas for a vegetarian or vegan product, says Andrea N. Giancoli, MPH, RD, registered dietitian and nutrition manager for Openfit.

Your big disparities are in fat, carbs, sodium, and fiber. “[The Impossible Burger] is very high in saturated fat,” Giancoli says. “It’s got eight grams, and that’s the fat that we want to consume less of.”

In this regard, the Impossible Burger is similar to a not-very-lean ground beef patty, she says. But if you compare it to leaner meat, then the ground beef burger has less saturated fat: With a 95 percent lean, 5 percent fat burger, you’re getting 24 g of protein and 6 g of fat, only 2.5 g of which is saturated fat.

What about other measures of health? “The sodium isn’t a bad point; it’s only 370 milligrams, so it’s not a ton for one burger,” says Giancoli. A real meat burger, however, is very low in sodium, clocking in at a minuscule 75 mg. “You do get three grams of fiber from the Impossible Burger, so that’s great — you don’t get any fiber from a beef burger.”

But for faux meat to truly be “healthier,” says registered dietitian Alissa Rumsey, MS, RD, it would need to be constructed from whole vegetables, which isn’t a possible burger. It’s an important distinction to make, though: “These meat-free burgers, like most other vegetarian/vegan burgers, are full of highly processed ingredients like protein isolated from plants. They’re fine to eat, but I’d like to see people include more whole-food forms of plant-based protein like pulses — beans, lentils, peas, chickpeas — nuts and seeds, and certain whole grains like quinoa.”

“The problem I see with these ‘healthier’ burgers,” she says, “is that it leads to the idea of ‘it’s better for me, so I can eat as much as I want.’ This type of thinking may lead to overeating because, instead of responding to your body’s feelings of fullness and satiety, it becomes ‘I’m going to eat it all because I can.'”

How Does the Impossible Burger Taste?

We asked our intrepid dietitians, who have both tried the Impossible Burger, what they really think about their experiences with this brave new nutrition.

First up is omnivore Alissa Rumsey: I’ve tried both burgers a few times. But by themselves, without a lot of toppings, they don’t give me the taste satisfaction I’m looking for from a burger — I’d rather just eat a meat burger or a different plant-based meal. But I have enjoyed them when they’ve come with several different toppings and sauces, as it makes it more satisfying and tasty.