How The American Diet Has Changed Since 1970

A lot has changed since the 1970s when platform shoes and bell-bottoms were all the rage, The Brady Bunch was America’s favorite family, and some movie called Star Wars was creating a whole new group of nerds. The American diet has also gone through a makeover, because believe it or not, there once was a time when avocados weren’t in every recipe.

An eye-catching interactive chart from Flowing Data takes us back in time by giving us a look at the most popular foods consumed by Americans from 1970 to 2013. Pulling data from the Food Availability Data System, the chart shows the average daily consumption of meat, vegetables, fruit, grains, dairy, and fat. It also breaks consumption down into individual foods. 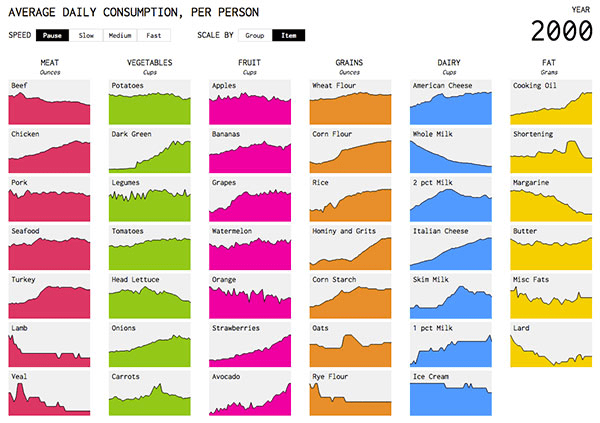 There are few foods that have remained consistently popular over the past 40 years, but tomatoes, potatoes, apples, watermelon, wheat flour, and butter have all been a staple of American diets since the Watergate scandal.

Jodi Geigle, certified nutrition counselor, explains some of the trends. “It’s a combo of ease, finances, and nutrition. Apples and potatoes are simple and affordable staples. They’re ‘filling’ foods, so they help people lose weight by making them feel full while consuming fewer calories and staying on budget.”

On the other hand, whole milk and margarine haven’t faired as well, and their consumption has declined 79 percent and 75 percent respectively.

“This directly correlates to US marketing tactics as well as food production systems,” Geigle says. “Margarine was marketed as a ‘healthier’ alternative to butter and it was cheaper. As time and studies progressed — and we found out about serious chronic health issues that resulted from the trans fat [which is found in margarine] — the public realized they’d been duped and started shifting towards other options. With a surge in both nutrition science as well as health awareness, consumers are paying attention to what’s going into their body and what effects those foods are having on both their long-term and short term health.”

To Geigle’s point, our protein choices have shifted as well, though Denis Faye, Openfit’s Senior Director of Nutrition Content doesn’t think it’s entirely consumer-driven. In 1970, beef and pork were the front-runners, in 2004 chicken snagged first place. “The big thing to remember is that the food we eat isn’t as dictated by consumer demand as it is by the agriculture industry and what’s convenient to make. Yes, the industry looks at what people want, but it’s a whole lot easier to raise a chicken than a cow.”

In terms of produce, we’re eating 200 percent more strawberries and avocados, but dark greens consumption has increased 666 percent! (Giving all of you who think kale is the devil, some proof.) Consumption of vegetables like spinach, broccoli, and kale skyrocketed to become the second most popular vegetable eaten in America, just behind potatoes.

“In the 1980s, kale was just a garnish,” Faye says. “But now people are actually eating it.” He suggests that a likely explanation for the low consumption of any dark greens until the 1980s is that people simply didn’t know what their options were. Dark leafy greens (like kale) have surged in popularity to the point they’ve even made it onto the menu at McDonalds.

Check out the graphic below for an even more detailed look at how the American Diet has changed over the years.