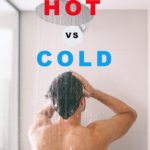 If you’re intrigued by the idea of turning your post-exercise shower into a step in your recovery routine, you might be wondering whether you’re better off taking a hot or cold shower after a workout. (Or maybe you want to skip it altogether, like so many celebs have admitted to doing lately…ew.)

But the truth is, while there’s no harm in taking a cold shower, there’s not a lot of science to back up any physical benefits of doing so.

Read on to learn more.

Give your body what it needs to recover with LADDER Whey Protein, boasting 26 grams of protein. Get it here today! 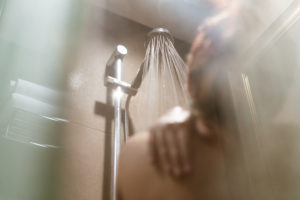 In theory, because cold helps to constrict blood vessels, cold water may be more helpful for taming soreness after a workout than hot water. But most research looks at cold soaks or baths, not showers.

A 2009 study in male soccer players found that cold water immersion had no effect on actual muscle damage and inflammation, though it did lower perceived fatigue and soreness. But that’s not the same as a shower with cold tap water.

Meanwhile, the evidence on warm showers is slim, too.

For example, a study in patients with knee osteoarthritis reveals that bathing in body temperature water (either mineral or tap) for 20 minutes a day, five days a week helped ease pain and improve joint range of motion after two weeks. Whether or not you’d see these kinds of benefits from a hot shower remains to be seen.

Bottom line: There’s no harm in taking a cold or a hot shower after you work out, but it may not offer the recovery benefits you’re hoping for.

What Are the Other Benefits to a Shower After a Workout? 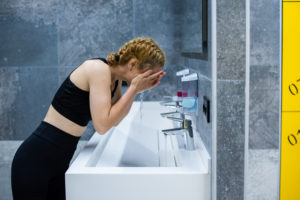 Working out is a healthy habit, but all that sweat and grime can turn your skin into ripe territory for bacteria to grow, especially if you’re in a warm, crowded environment. This can put you at risk for a variety of common skin infections, including ringworm and plantar warts, according to the American Academy of Dermatology Association. (Ew.) Showering ASAP after a workout is one simple way to get rid of stink and bacteria on your skin, according to the AADA.

Plus, scrubbing can unclog your skin of any leftover sweat and dead skin cells from your workout, helping prevent pimples, blackheads, and whiteheads from forming. (If you’re working from home and stretching your time between showers, you might want to reconsider that habit!)

Are There Other Cooldown Methods I Should Try? 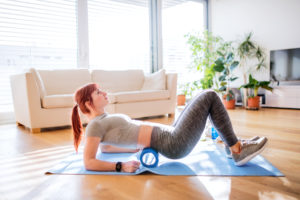 Instead of relying on your shower for your post-workout recovery, spend time on an active cooldown, paired with a self-massage method like foam rolling. “[These] have shown to have the best outcomes for decreased soreness following a workout,” says Leada Malek, D.P.T., C.S.C.S., a board-certified sports physical therapist.

Unlike a passive cooldown, which often involves static stretches and little effort, an active cooldown features low intensity movements that keep blood flowing to the muscles you just worked.

Malek recommends dynamic movements that focus on the muscles you hit in your workout, keeping your intensity low so you don’t cause more fatigue. Cap off your cooldown with a few minutes of foam rolling or self-massage, and feel free to hold some static stretches if you’d like.

3 Fitness Mistakes That Could Be Causing Your Lower Back Pain

Workouts can sometimes be hard on your back. We're going to explore lower back pain causes so you can worko...