Add These Healthier Christmas Pie Recipes to Your Holiday Menu

Find a balance between healthy and happy this holiday season with smart tweaks on your favorite desserts. Christmas pies can be a reasonable way to indulge without overdoing it, because many are filled with good-for-you ingredients, like fruits, nuts, and sometimes even veggies! Plus, pies are also relatively easy to make compared to more complex confections.

Depending on your personal preferences and lifestyle, you can kick up the health factor even more by swapping out or reducing the amount of added sugar, butter, and white flour in recipes.

Here are few recipes that do that for you already, making them — in our opinion — some of the best Christmas pies for improving on tradition.

After all the holiday indulging is done, get back on track with Openfit’s live and on-demand workout programs. Get started for free today. 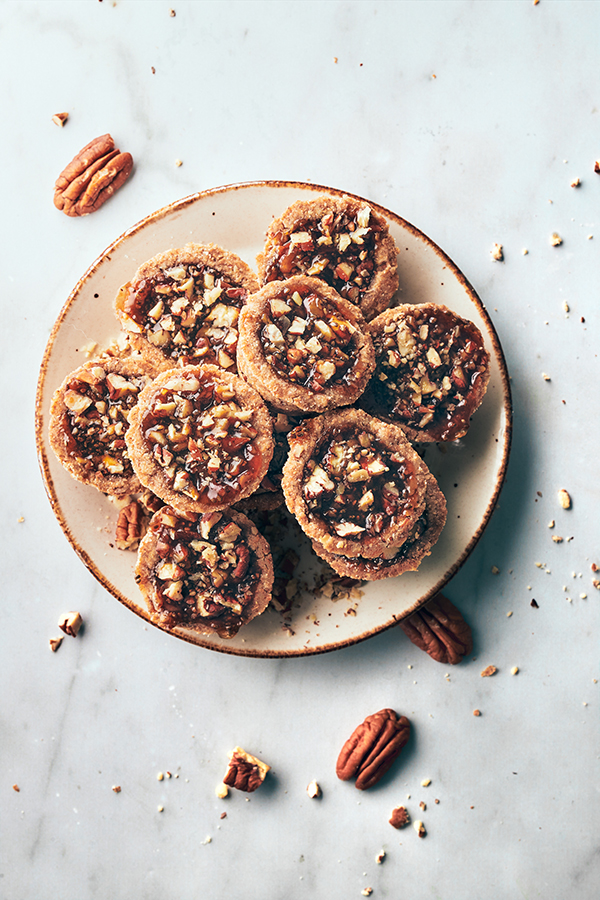 Get the recipe at Openfit.

The bright red cranberries in this Healthy Cranberry Apple Pie recipe from Amy’s Healthy Baking literally make this pie look like Christmas. Paired with an easy, made-from-scratch crust using whole-wheat flour and butter, the fruity filling relies mostly on the natural sweetness of Fuji apples and just a touch of maple syrup.

Get the recipe at Amy’s Healthy Baking. 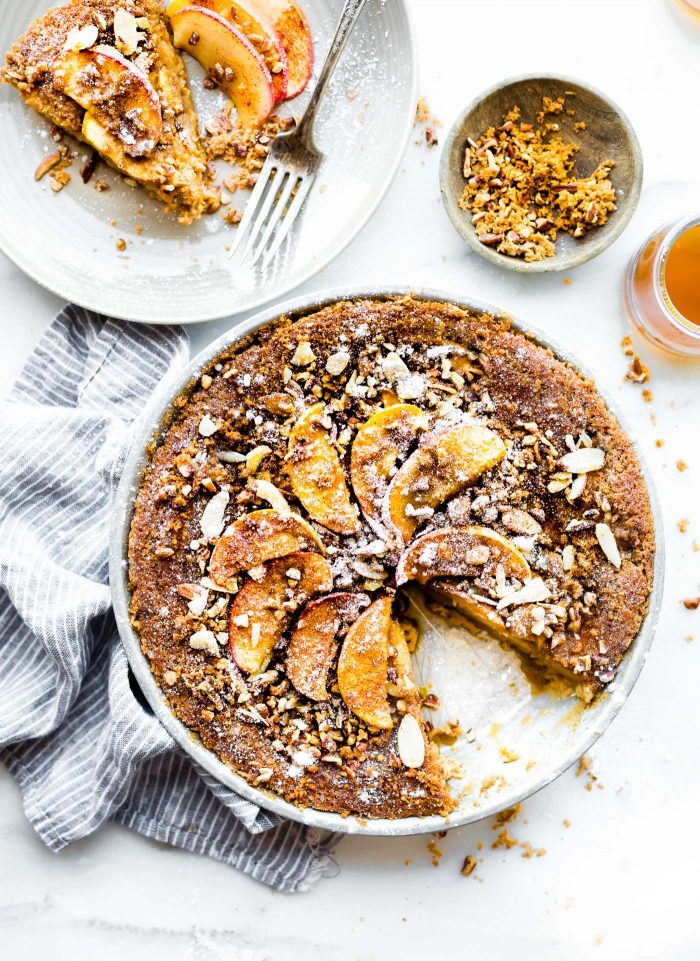 Combining fresh apple and sliced pears, Cotter Crunch’s Easy Paleo Pear Apple Pie forms its own crust while baking for an extremely satisfying, time-saving trick. That’s right, you won’t have to deal with making a crust and pressing it into a pan! The gluten-, dairy-, and grain-free recipe also uses almond or coconut milk for a delicious-smelling pie spiced with cinnamon and ground ginger.

Get the recipe at Cotter Crunch. 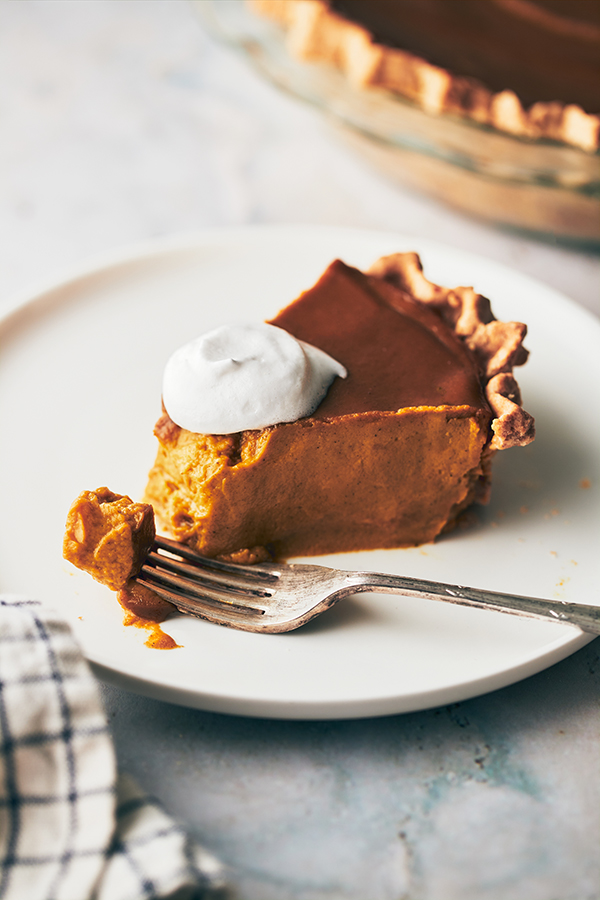 Although pumpkin pie may seem like a healthier option for dessert — it’s namesake is a squash, after all! — it could still use some healthier upgrades. Openfit’s Vegan Pumpkin Pie recipe provides a plant-based spin on the traditional treat, using avocado instead of eggs and unsweetened almond milk instead of evaporated milk. All together, a slice will only cost you 144 calories, which is way under a usual slice that comes in around 300 calories.

Get the recipe at Openfit. 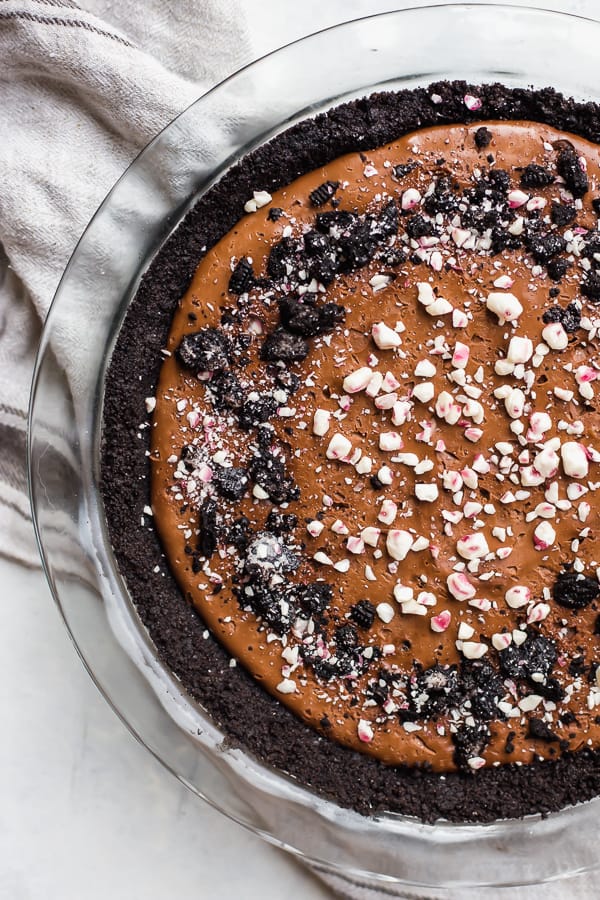 When you have visions of minty candy canes and chocolates dancing in your head, Fooduzzi’s Creamy Vegan Chocolate Peppermint Pie is a vegan dream. The filling uses tofu to make it nice and creamy, and it just needs a half teaspoon of peppermint extract to get that signature, winter flavor.

You can make your own crust, or you can forgo the Oreos by buying a crust in advance. “For an alternative to making your own Oreo crust, Mi-Del has a pre-made Chocolate Snap Pie Crust that has a decent nutritional label,” says Stowell.

Get the recipe at Fooduzzi. 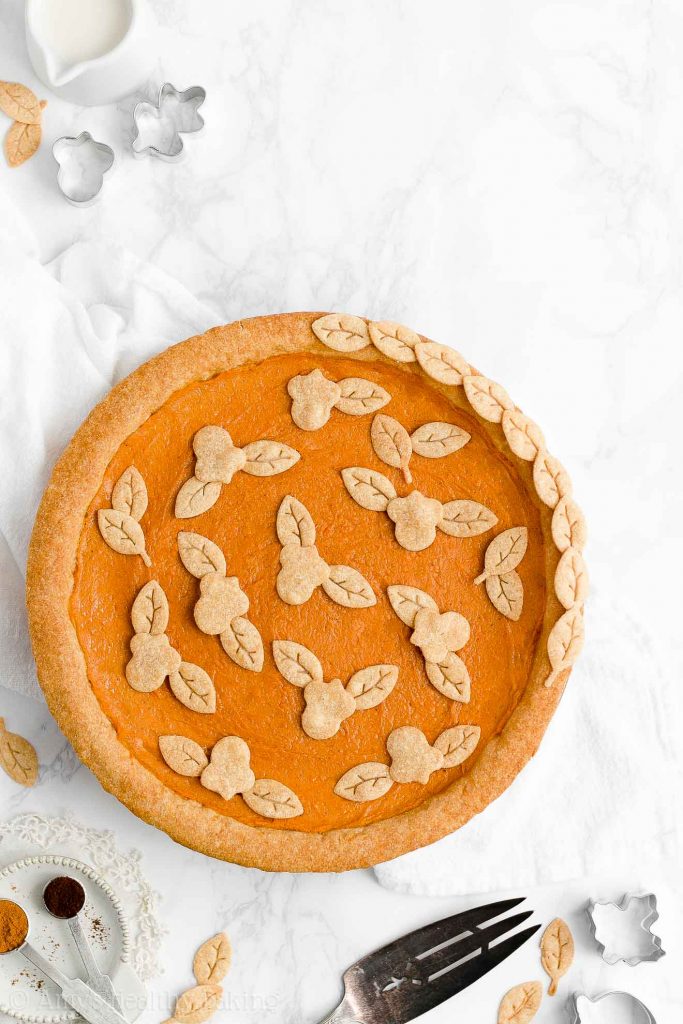 Sweet potatoes pack in some doses of vitamins A and C, as well as potassium, calcium, magnesium, and phosphorus. In an effort to capitalize on these nutrients and not bury them with not-so-healthy ingredients, the Ultimate Healthy Sweet Potato Pie recipe from Amy’s Healthy Baking uses sugar alternatives such as Swerve and stevia to reduce the impact of added sugar.

Get the recipe at Amy’s Healthy Baking. 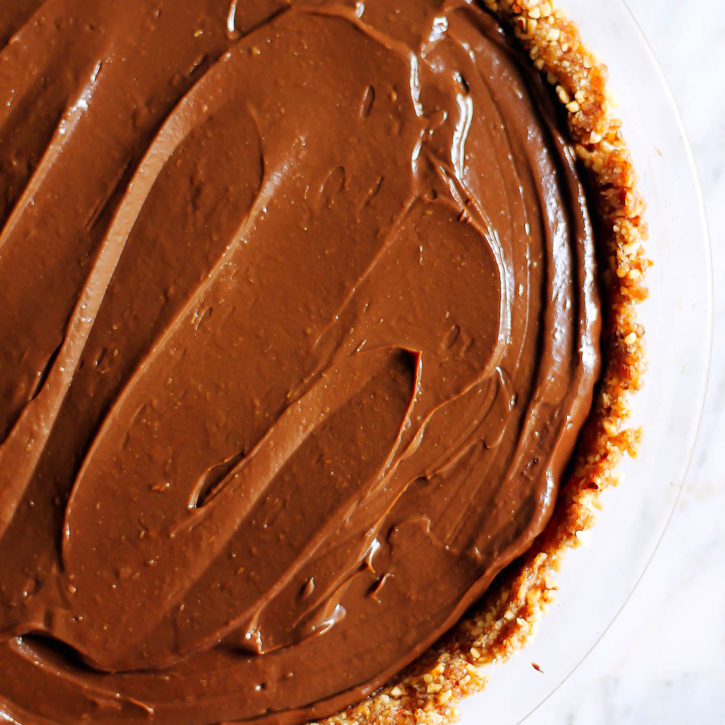 This pudding pie recipe from Ambitious Kitchen proves two powerful baking points: 1. You can make a totally decadent dessert without using any grains, dairy, gluten, or refined sugars; 2. You don’t even have to turn on your oven. This ingenious, sweet-savory, no-bake crust is made with almonds and dates, and is a delicious base for the chocolate filling made with creamy avocados.

Get the recipe at Ambitious Kitchen. 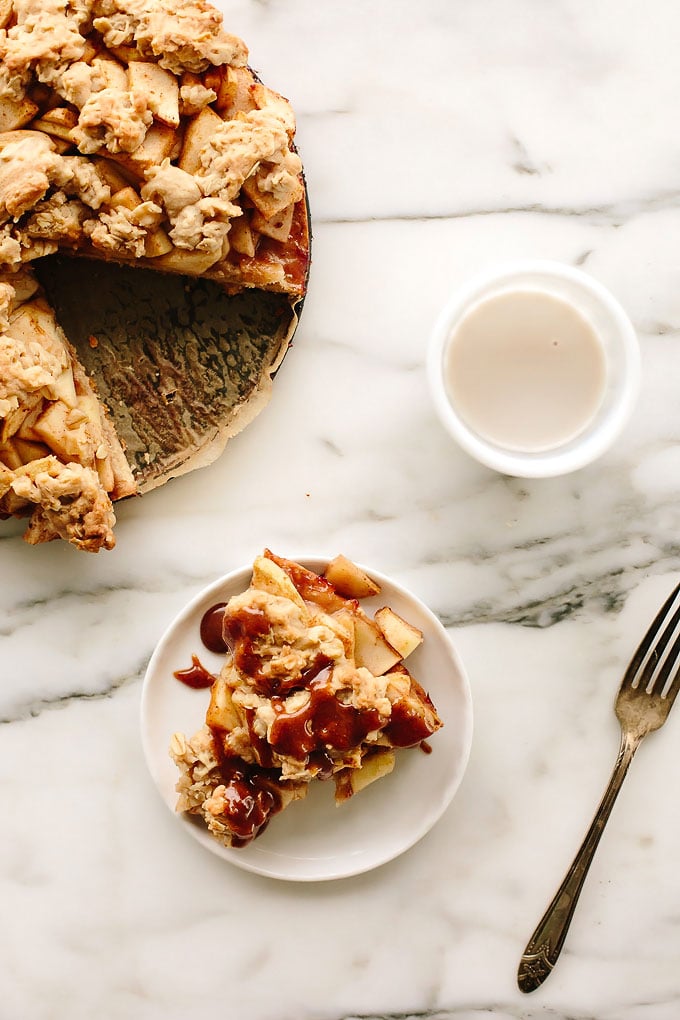 With a healthier pie crust made from spelt flour and maple syrup, instead of conventional flour and sugar, Blissful Basil’s Vegan Caramel Apple Crumble Pie is a pure delight. It’s filled with Granny Smith apples, cinnamon, and nutmeg, which makes you wonder if anything could be more quintessentially “Christmas” in the kitchen.

Get the recipe at Blissful Basil. 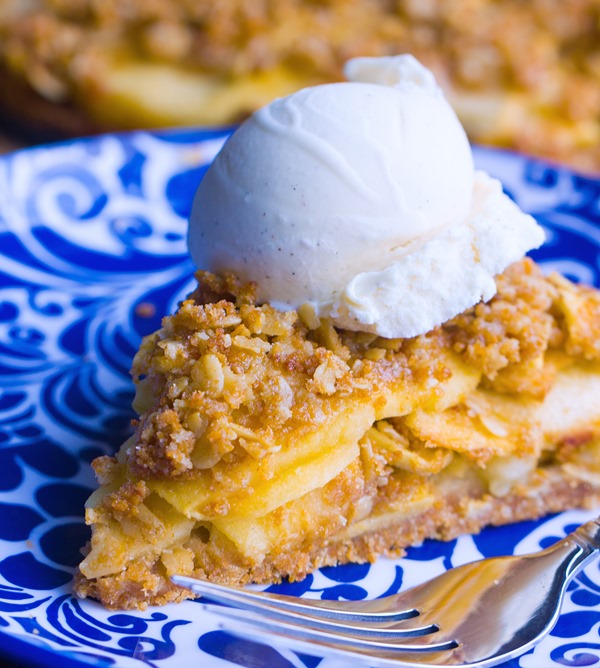 Warm, homemade apple pie is the ultimate comforting dessert. For a new spin on this grandmotherly classic, Chocolate Covered Katie’s Apple Pie adds an oatmeal crumble with spelt and applesauce on top of the apple filling and homemade crust. The recipe even offers suggestions for making it with or without sugar.

Get the recipe at Chocolate Covered Katie. 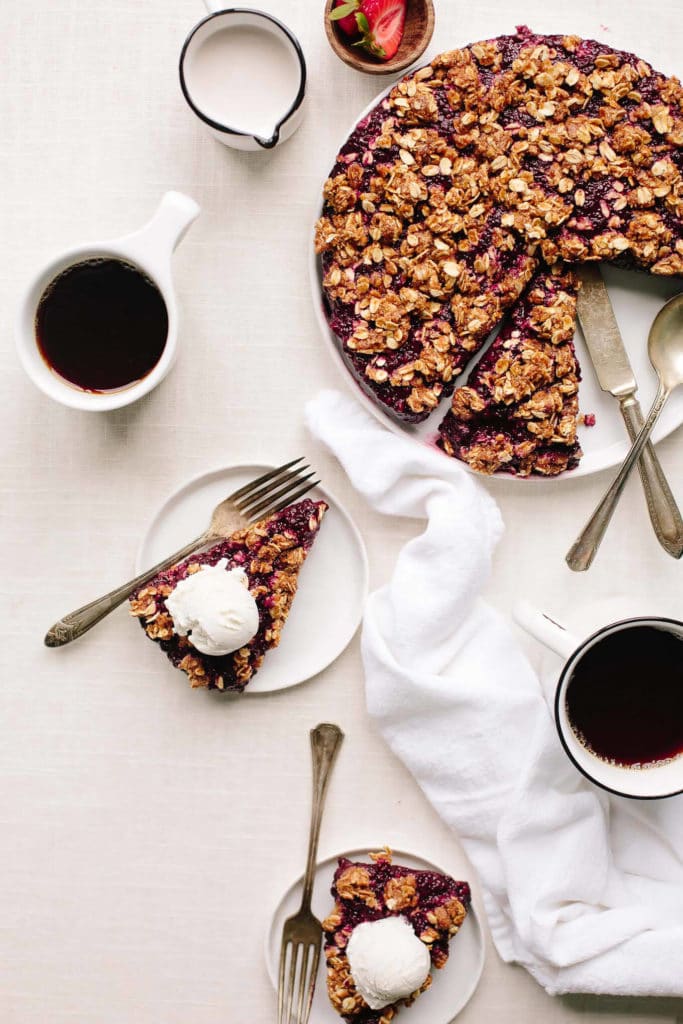 Loaded with dietary fiber and protein from the chia seeds, plus other feel-good ingredients like flaxseed and oats, Blissful Basil’s No-Bake Vegan Berry Chia Crumble Pie is a no-stress recipe delivering strong berry flavors. It’s perfectly delightful on it’s own, or topped with a small scoop of healthier ice cream.

Get the recipe at Blissful Basil.

“There are lots of easy substitutions you can make when you’re baking, such as using dried fruit instead of chocolate chips, or a light dusting of powdered sugar instead of a heavy frosting,” says Stowell.

When it comes to pies specifically, you can also lighten up on the crust. “You can reduce the actual amount of crust by just doing a bottom layer instead of a covered pie,” says Stowell. If you have extra crust, you can use it for small decorative flourishes on top of the pie. “I also like making crusts with nut-based flours instead of white flour.

“However, even when desserts have heaps of healthy ingredients, such as fruit and nuts, considering the caloric value is still important. “Nuts are filled with heart-healthy fats, but think about how a portion of six almonds or 10 cashews translates into a slice of pie,” says Stowell.