From Cows to Crops: An Overview of the Healthiest Milks

As kids, we were mesmerized by ad campaigns for the latest, greatest — most sugary —breakfast cereals. Today, we know those processed, artificially dyed flakes and rings are to be avoided like homework. Ironically, we’ve been beset by another kind of breakfast hype — this time over milk.

For decades, the recommendation was simple: skim all the way. Then came the headlines that full-fat dairy was superior for satiety and nutrition.

But then goat milk started showing up on more shelves — could it be better than both? At the same time, almond milk devotees raised an eyebrow as oat milk started fighting for space in the dairy case alongside coconut, rice, and other relative newcomers like pea and hemp.

Whether your milk consumption is asplash in your morning coffee, a base for cereal or smoothies, or a regular glass or two with meals — it’s always a good idea to re-evaluate whether you’re making the healthiest choice, according to the latest science.

We talked with two experts and compared the nutritional stats of the most popular dairy and non-dairy milks to answer the question:

What Is The Healthiest Milk? 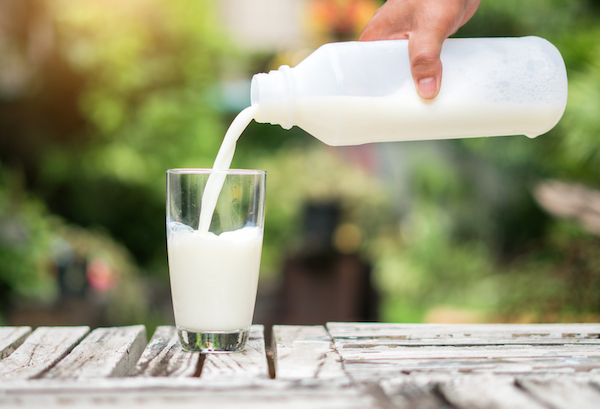 So how do you determine if a milk is healthy, anyway?

“First, as a scientist, I look to the literature and see what it has to say about the healthfulness of various milks,” says Dana Hunnes, Ph.D. MPH, RD, senior dietitian at the Ronald Reagan UCLA Medical Center. “Then as a human and as an environmentalist, I look to see what is best for both me and the environment.”

What about those rumblings that dairy milk is for babies, and adults don’t need it? Science and nature say there’s something to that argument.

“I think all too often, we’re brainwashed to believe cow’s milk and dairy products are needed for good health, but in the developed world, we don’t require another animal’s milk for good health,” says Hunnes. “In fact, we are the only species on the planet that knowingly, purposely drinks another species’ milk. Many people the world over become lactose intolerant with age, because we’re not meant to drink milk past the age of weaning.”

What Is The Healthiest Dairy Milk?

“It depends on the individual, but I’m not a huge proponent of dairy milk for everyone,” says Amy Shapiro, MS, RD, CDN, a registered dietitian with Real Nutrition NYC. “If you’re not consuming organic milk, you’re getting hormones or possibly antibiotics. And in my clients, I find that after a certain age, everyone has a hard time digesting lactose. I don’t think we need additional protein from milk or anything we drink, because Americans get a ton of protein on their own.”

But if you’re going to drink dairy milk, “Probably whole milk is healthiest,” says Hunnes. “Yes, it has saturated fat, but it also has certain types of fats in it that may be protective as well.”

“It depends on what the rest of the makeup of your diet is,” says Hunnes. “If you are getting healthy fats from other sources, like nuts, seeds, avocados and olive oil, you probably don’t need full-fat dairy, or any dairy at all. But if you’re eating mostly high saturated-fat foods, you might be better off with skim, or my preference: no real dairy.”

“Skim is kind of off the table,” says Shapiro. “I always say it’s like drinking sugar water. If you put milk in your coffee, just use a splash of whole milk. You’ll use less. If you’re drinking a cup of it every day, I would say go down to 2% or 1%.”

What Is The Healthiest Non-Dairy Milk? 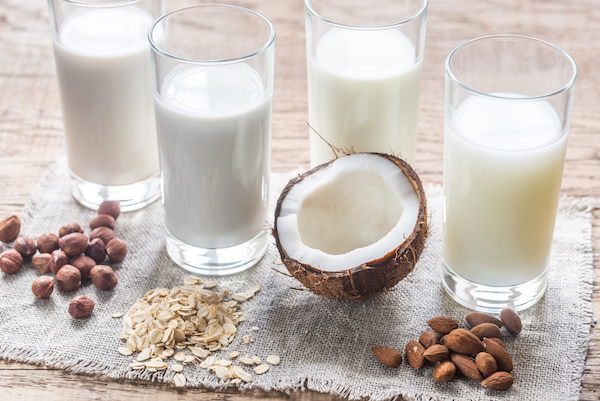 When choosing a non-dairy milk, go with unsweetened varieties — you’ll save a lot of unnecessary sugar and calories. And be aware that some people are sensitive to carrageenan, which is used as a thickener in some non-dairy milks, which can cause stomach upset and bloating. If one variety doesn’t agree with you, you might need to try another.

A big advantage of non-dairy milks is that they provide a tasty alternative for people with lactose intolerance or dairy allergies. But in terms of the “best” variety, Hunnes says it depends on what your personal needs and desires are.

“I personally drink organic unsweetened soy milk,” she says. “I think it has the creamiest, best flavor and the most protein per cup. Other non-dairy milks, such as coconut milk, are creamy but have little protein.”

“Usually, I go for unsweetened almond milk, because it’s benign and mild in flavor,” says Shapiro. “It’s very low in calories, and that’s important when people are adding milk to smoothies or other things. You don’t need all those calories and carbs.”

But Shapiro advises reading the label when purchasing oat milk, because some brands include rapeseed oil — most other milk options don’t include oils.

“I’m also not a huge advocate of rice milk, unless it’s for people who have allergies,” says Shapiro, noting that arsenic has been detected in rice products, including milk. “Rice really has minimal nutritional value.”

Here’s how the most popular non-dairy milk alternatives stack up nutritionally to animal milks.

So what’s the healthiest milk? The answer may vary, depending on your individual nutritional needs, but overall: If you drink dairy milk, make it full-fat and organic; if you go for non-dairy milk, make it unsweetened, and opt for soy, almond or cashew.

Michael Martin is a New York City-based writer and editor who specializes in health, nutrition and lifestyle reporting. Follow him on Twitter.

Is A2 Milk Better for You Than Regular Cow’s Milk?

A2 Milk is known to be easier to digest and healthier than other milk including A1 milk, but does this matt...

Wake up and Smell the Chicory Root: A Healthy Supplement and Coffee Substitute

Commonly grown in northwestern Europe, chicory is a root that comes with many benefits, from adding fiber t...

Is Monk Fruit a Keto-Friendly Sweetener?

Monk fruit is a sweetener made largely popular by the keto diet, it is plant derived and contains very litt...

19sharesPinterestFacebookRedditTwitterIn theory, it’s easier to be healthy when you’re working ...

The novel coronavirus outbreak started at a seafood market — is it safe to eat sushi and other raw anima...

What to eat to get great abs? It starts with what you eat. No one can see your abs if they are covered in fat.