8 Foods That Are Surprisingly Not Gluten Free 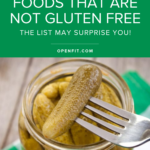 Whether you’ve been diagnosed with celiac disease (CD) or a wheat allergy, or suspect you might have a non-celiac gluten sensitivity (NCGS), eating gluten-free has its challenges. Especially when it comes to foods that don’t seem to contain wheat, rye, or barley in any obvious way. Rice, potatoes, and corn are among the most popular alternatives, but even those foods can contain surprising amounts of gluten depending on the form in which they’re offered.

Gluten is a group of proteins found in wheat, rye, and barley, along with the products made from these grains, such as bread and liquid bread (a.k.a. beer). Depending on whether or not you have a sensitivity or — much more seriously — celiac disease, eating wheat or other foods that contain gluten can wreak havoc on your body in myriad ways.

These days, gluten’s more ubiquitous than electric scooters. You’re probably soaking in it.

“Soybeans are gluten-free, so you might assume soy sauce is as well,” says Begun. “It’s really surprising for most people, but soy sauce usually contains wheat. Thankfully there are gluten-free options.” Tamari, which is also made from fermented soy sauce, has a similar color and flavor, but doesn’t contain wheat. To be safe, though, make sure the label says “gluten free.”

You might think: Skip the soy sauce and you should be good to go with sushi — after all, isn’t it just rice, fish, and seaweed? Nope. “Sushi rice can have gluten in it from vinegar or other additives which are used to make it stickier,” says Begun.

“Fake crab meat and wasabi may also contain gluten.” As an alternative, sashimi prepared with just raw fish and no rice is an option, but be wary of cross contamination.

“Many people confuse gluten-containing foods with carbohydrate-rich foods,” says Begun. On their own, potatoes and sweet potatoes are naturally gluten-free, but when restaurants and frozen-food companies turn them into fries, things can change.

Coatings that are added to make fries crispier often contain gluten. To be safe, only eat fries without coatings prepared in dedicated gluten-free fryers.

When it comes to making gluten-free sweets, you might consider Rice Krispies treats a no-brainer. Wrong again. “The original Rice Krispies brand is made with malt flavor, which is not gluten-free,” says Begun.

Pickles are made with basic brines, which often contain vinegar. Pure distilled vinegars, such as cider, balsamic, red, and white, are gluten-free. However, flavored or seasoned vinegars might not be.

Trendy as they are, farro, couscous, and spelt are not gluten-free. In fact, the word farro is actually Italian for a specific type of wheat, and couscous is made from durum wheat grains.

“Despite much misinformation on this topic, spelt is a form of wheat and so it does contain gluten,” says Begun. “It is not safe for people with celiac disease and non-celiac gluten sensitivity.”

Some herbal teas and blends contain barley malt to add a sweet taste — which also adds gluten. In some cases, tea bags are also sealed using a paste that contains gluten.

Begun recommends carefully scanning labels on tea blends. Another way to enjoy a warm cuppa without gluten is to buy single-variety loose leaf teas and use your own infuser or brew in a teapot.

While not a food, Chapstick is unavoidably ingested, and there are claims swirling in celiac circles that it isn’t gluten-free. The company clarifies on its website that it does not contain oats, barley, or rye, but doesn’t address wheat or specify whether or not it’s gluten-free. Regarding beauty products, Begun explains: “Gluten proteins are too big to be absorbed through the skin, however products that can be ingested can be of concern if they contain gluten.”