Flaxseed: What It Is, What It Does, and How to Eat More of It 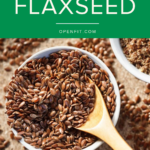 From the way it’s so casually offered up as a cure-all for everything from high cholesterol to dry eyes, flax may seem like some kind of hipster rebranding of snake oil. If it does so much, how come it’s not as ubiquitous as pumpkin spice?

Let’s take a look at whether or not flax is a placebo dressed up like a miracle seed by explaining what it is, what it’s been proven to do, and how you can incorporate it into your diet.

Flax is a blue flowered plant grown in cool, northern climates such as the prairies of the Northern U.S. and Western Canada. Its seeds are what make it interesting, which is why you’ll see “flax,” “flaxseed,” or “flax seed” used interchangeably in products and packaging.

Flax was first introduced to the U.S. by early colonists, and it was used primarily to produce fiber for clothing. As industry grew, flaxseed oil — also known as linseed oil — became an important ingredient in paint, and was used in meal to feed livestock. By the 1940s, cotton had replaced flax as a commonly used fiber in the United States, and flax’s popularity as a commercially grown crop began to wane.

There are usually two varietals: gold flaxseed and brown flaxseed. Although some suppliers will tout one over the other (based on claims of either nutritional or taste superiority), they actually work out to be pretty much the same on most levels.

Before you sprinkle flaxseed around your bed in the hopes of waking up 20 years younger like Tom Hanks in Big, let’s take a look at the actual measurable benefits derived from it.

Flaxseeds, like walnuts and chia seeds, are loaded with omega-3 fats. While flaxseed doesn’t contain the EPA and DHA omega-3s found in fish oil, it does offer a version of omega-3 called alpha-linolenic acid (ALA). ALA is a polyunsaturated fatty acid that’s been found to possibly reduce the risk of heart disease by positively affecting blood pressure, cholesterol, arrhythmias (irregular heart beat), and arterial plaque buildup.

Eating two tablespoons of flaxseed per day provides 20–25 percent of the recommended daily intake of fiber, and flaxseeds are also low in other carbohydrates. High levels of mucilage — a gel-forming substance that moves through the gastrointestinal tract undigested — in flaxseed can slow the passage of food from the stomach to the small intestine, increasing nutrient absorption. That may also prolong fullness, which is key for those looking to lose weight.

Studies have shown that the omega-3 fatty acids in flaxseed are associated with decreases in the biomarkers of inflammation. Since inflammation plays a role in issues ranging from dry eyes to inflammatory bowel disease to neurological disorders, the omega-3s in flaxseed could be valuable in a host of applications.

How to Eat Flaxseeds

The most important thing to know is that, in order to get the maximum benefit from flax, it must be ground; the seed’s nigh-impervious exterior means whole flax can pass through the gastrointestinal tract undigested.

So consider purchasing flaxmeal or ground flax (or grind up your own raw flaxseed), which can be stirred into hot or cold cereal, added to mustard or mayonnaise for sandwiches, or dropped into flour mixtures for muffins or breads. It’s versatile, and neither the gold nor the brown varietals have a strong flavor, so they can blend with both sweet and savory and you’ll barely know they’re there. Just remember to refrigerate or freeze ground flaxseed to prevent oxidation.

The main difference lies between flax meal and flax oil. The two actually offer slightly differing benefits: Oil, for example, shows higher levels of omega-3 fatty acids than ground flax, whereas ground flax is a better source of minerals such as magnesium than oil.

As a writer, editor, and producer, Eric's work has appeared in publications such as Men’s Journal, NBC, Mental Floss, Nylon, and Cosmopolitan. He studied English and Film at Boston University, once babysat with Angelina Jolie while doing thankless PA work on indie films in the ‘90s, and his first grown-up office job was with Muppets. Follow him on Twitter.