Exercising Under the Influence: How Alcohol Affects Athletic Performance

Certain activities just seem to pair nicely with a cocktail or a cold, frothy brew. Watching football, for example. Or having dinner with friends. Or saving the world from villains like Auric Goldfinger and Dr. No while dressed in a bespoke tuxedo and driving an armored Aston Martin. But few people would ever associate exercise with excessive drinking. The two are simply too far apart on the “healthy lifestyle choices” spectrum, and many addiction counselors even use exercise to treat alcoholism since both stimulate the same reward center in the brain.

But here’s the thing: Studies show that the more consistently you work out, the more likely you are to be a tippler than a teetotaler. Not only that, you’re more likely to imbibe on the days you sweat than on the days you don’t, according to scientists at Pennsylvania State University. “The research is pretty clear,” says Jakob Vingren, Ph.D., associate professor of exercise physiology and biological sciences at the University of North Texas. “People who are physically active tend to drink more than people who are not.”

The potential reasons are numerous. If you participate in team sports, the social pressures associated with group behavior might drive you to drink. It’s also possible that the reward mechanism mentioned earlier might work in reverse, such that regular exercise increases the likelihood that you’ll seek a similar “fix” through drinking. “But the reality is that no one has been able to show a direct cause and effect,” says Vingren.

So instead of being able to explain why you might drink more if you exercise, we’ll have to settle for elaborating on the consequences, which vary depending on the type of exercise you perform (cardio or strength training), the quantity of alcohol you consume, and when, exactly, you consume it. 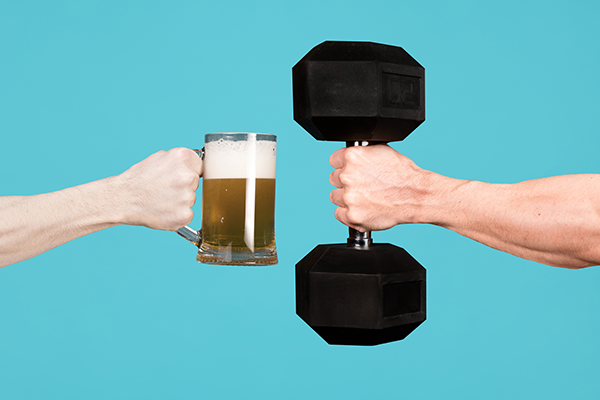 Unless you’re driving a flex fuel car, filling up on alcohol won’t do you any favors if you’re an endurance athlete. That might sound like common sense — until you start hanging around serious runners (many of whom brag about their ability to drink on the run), participate in a brew hop (where they put that ability into practice), or attend a cyclocross event and witness a “hand up” (the popular but unsanctioned practice of passing beers to cyclists during a race).

Whether you get buzzed right before you exercise or fill your water bottle with something more “hoppy,” know this: “If you are near or exceed the legal limit for driving, you’ll see a reduction in aerobic power and performance,” says Vingren.

The reasons are still a bit murky, but the latest research suggests that alcohol interferes with the body’s ability to utilize glucose, its primary fuel source during high intensity exercise. “It could be that glucose is not being released from the liver at high-enough rates, or some direct interference with its oxidation during energy metabolism,” says Vingren. Either way, the result is the same: A decrease in the production of ATP, the body’s primary unit of energy.

Interestingly, becoming intoxicated has little effect on strength and explosive power, and the reason is likely that activities such as weightlifting and sprinting depend on a different energy system. “When you lift weights, you primarily use the phosphagen system, which produces ATP from creatine phosphate instead of glucose,” says Vingren. “Alcohol doesn’t seem to affect the rate of creatine phosphate utilization.”

Does that mean you should throw caution to the wind and fill your shaker bottle with gin and tonic instead of protein powder? Certainly not. But neither should you be afraid to pump iron after enjoying a mimosa brunch with your new Tinder match (assuming you can still pump said iron safely).

SCENARIO 2: EXERCISING WITH A HANGOVER

Endurance athletes are a hearty bunch, and few are those who haven’t bragged about crushing an especially mountainous/snowy/blazing hot/long and grueling workout the morning after a night of wild boozing. Should you ever hear such a tale in the future, call bullshit.

The scientific evidence supporting your challenge is admittedly scant, and probably at least as old as you are, but what research exists suggests that having a hangover can be just as debilitating to aerobic performance as being intoxicated. “A hangover is widely known to have a strong psychological component, but we also see a noticeable decrease in aerobic power,” says Vingren. Exercise capacity (i.e., the amount of work performed) also takes a dive, while heart rate (a reflection of effort) tends to increase.

Weightlifting yet again remains largely immune to the aftershocks of drinking. “The only time alcohol seems to affect strength training is when it’s consumed post-workout,” says Vingren, “and what we see then is an interference with training adaptations such as muscle growth and recovery.” Which brings us to the next scenario.

SCENARIO 3: DRINKING AFTER YOU EXERCISE 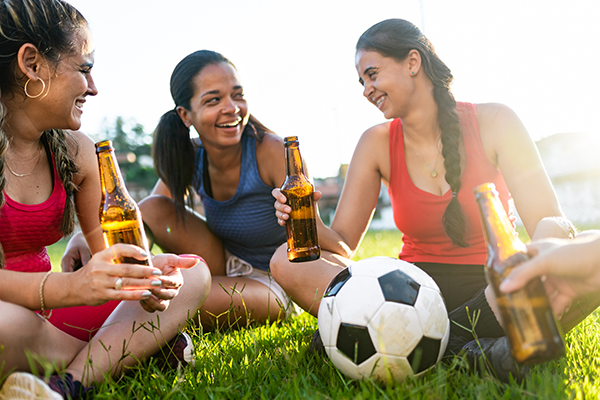 Perhaps you like to reward yourself after a tough workout. Maybe such efforts simply exhaust your willpower, leaving you with precious little to resist ducking into your favorite bar on your way home. Or perhaps you just get swept up in the post-training revelry of your borderline-alcoholic workout buddies. Whatever the reason, and as the Penn State researchers demonstrated in the study mentioned above, the odds of you grabbing a drink after working up a sweat are better than you grabbing a drink after, well, almost anything else.

If you’re a man and you lift weights, that can be a problem for a couple of reasons.
First, studies show that drinking during the post-exercise recovery period can elevate testosterone levels. That might seem like a good thing since testosterone is an anabolic hormone, and thus promotes muscle growth. “But the reason we see an elevation in testosterone might be because alcohol interferes with its ability to bind to androgen receptors on cells,” says Vingren. If testosterone can’t bind to its receptors, it can’t prompt cells to shift protein synthesis (AKA muscle growth) into a higher gear, and more of it circulates impotently in the blood.

As if that weren’t bad enough, alcohol can also interfere directly with cells’ ability to manufacture proteins. “So it suppresses both the signal that helps regulate protein synthesis and the translation of that signal,” says Vingren.

The combined effect can be staggering. In a study of Australian athletes, researchers found that drinking after strength training can reduce muscle protein synthesis by 37 percent. Admittedly, those Aussies tossed back enough alcohol to make most people’s livers cringe (six extra-strong screwdrivers immediately after exercise and again four hours later), but that doesn’t take away from their finding that alcohol can have a decidedly negative effect on muscle repair and growth.

“In terms of performance, the result is a slower recovery of concentric, eccentric, and isometric strength after a bout of muscle damaging exercise,” says Vingren, who has co-authored several studies investigating the effects of alcohol on exercise adaptations. “At least, that’s what we see in men. In women, we actually see either no effect or perhaps even a slight increase in the recovery of concentric strength with alcohol consumption during the recovery period.”

Vingren doesn’t have a firm explanation for that gender anomaly. “Were our results off? Maybe, but other studies have recently shown similar results. It’s one of those areas where more study is needed,” he says. “But if you’re a guy, and you’re going to go out and drink, you might be better off not going to the gym at all, because your recovery is going to be delayed.”

If you’re an endurance athlete, however, having two x chromosomes confers no particular advantage when it comes to tippling post-workout. Regardless of whether you pee standing up or sitting down, drinking will hamper your recovery. “Alcohol appears to depress glycogen resynthesis,” says Vingren. That’s important because the longer it takes you to replenish glycogen (the stored form of glucose) after a workout, the longer you’ll need to recuperate before your next one.

SCENARIO 4: MAKING A HABIT OF EXERCISING AND DRINKING

At this point you might understandably assume that you need to give up alcohol to achieve your fitness goals — until you realize that all of the studies mentioned above studied the effects of binge drinking, not responsible tippling. “And there really is a dose-dependent relationship,” says Vingren. “Having a glass of wine with dinner or a couple of cocktails on occasion shouldn’t be a problem.”

The problem occurs when you regularly have two or more drinks after you crush a workout. “Each time you drink [excessively] after going to the gym, your gains will be slightly diminished, and that can add up over time,” says Vingren. “That doesn’t mean you have to give up alcohol — just moderate your intake.”

If you must lift (or run or bike) and then drink, be sure to have a post-workout protein shake. In the Australian study mentioned above, when subjects consumed protein in addition to alcohol, protein synthesis was reduced by only 24 percent instead of 37 percent. That might not sound like much of a difference, but every bit counts.

“Also keep in mind that blood alcohol concentration matters,” says Vingren, giving a nod to his earlier advice about keeping your BAC below the legal limit for DWI. “If you have five drinks, but you spread them out over five or six hours, that will have less of an effect than if you drink them all in 10 minutes.” In short, don’t rush that tequila flight. Enjoy it responsibly.