What Are the Best Breathing Techniques for Exercise?

As anyone familiar with the epithet “mouth breather” knows, mouth breathing has a certain stigma. But is this just an arbitrary social norm, or is there some solid science that can show us why nose breathing is ideal? And are there preferred breathing techniques for exercise performance whether you use your mouth or your nose?

Practice your breathing techniques with Yoga 52 from Openfit! Get started with a free yoga workout today.

How Exercise Impacts Your Lungs

To understand why nose breathing matters, you need to know about hyperventilation and the impact of exercise on your lungs.

Most of us know that breathing into a paper bag seems to help if you’re hyperventilating. But why? This “trick” works by recycling the carbon dioxide (CO2) lost when a person exhales too much of it.

This CO2 isn’t a waste product. It’s essential for regulating the exchange of oxygen from red blood cells to tissues. That’s why a dizzy, hyperventilating person can bounce back after a few breaths in a paper bag. Oxygen is again being delivered to their brain, thanks to the CO2.

And that’s also why exhausted runners or cyclists may find relief when they breathe through their noses. (If you’re a mouth breather, don’t sweat it. Some experts recommend breathing through both the mouth and the nose.)

Should You Breathe Through Your Nose When Exercising? 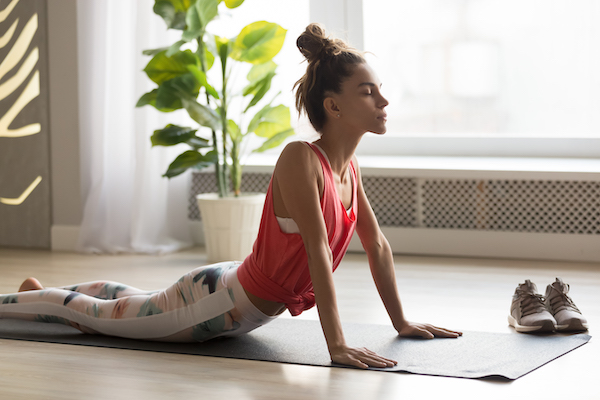 Yes, but not always and maybe not right away (especially if you’re a lifelong mouth breather), according to the science and the experts. Here’s why.

Nose breathing reduces breathing rate and volume, which limits the amount of CO2 lost through the breath. That’s partly because breathing through your nostrils increases air resistance by up to 50%. (Yes, this technically makes breathing harder.)

Research even shows that your heart rate increases with nose breathing during intense exercise. (That makes nose breathing a no-go for people with cardiovascular issues.)

But the added air resistance allows for increased oxygen delivery to the bloodstream, says George Dallam, Ph.D., a professor in the Department of Exercise Science, Health Promotion and Recreation at Colorado State University, Pueblo. Paradoxically, this makes nose breathing much more efficient than mouth breathing in certain cases.

To be fair, some studies show no difference between mouth breathing and nose breathing for power and performance. Christine Luff, a certified personal trainer and running coach, says she prefers a mix for optimum performance.

Luff has found that relying solely on nose breathing may also increase your risk of getting side stitches.

Dallam, who is also a triathlon coach, is on Team Nose Breathing. He says that any dips in performance happen because you haven’t adapted yet. (He says it gets better over time, usually six months, in his experience.)

“The basic scientific reason people presume you can’t do the same amount of work nasally is because you can’t increase your ventilation as much as mouth breathing,” he says.

But in the studies Dallam has conducted, he says that you extract more oxygen through the nose than the mouth.

“We see that the downstream oxygen is reduced, which means you’re pulling more oxygen out through nose breathing,” he says.

What Are Some Breathing Techniques You Should Use When Exercising?

“Deep belly breathing is the most efficient and effective way to breathe when running,” says Luff, adding that it may help you avoid annoying side stitches, too. “Take deep breaths in through your mouth and nose, which allows you to get the most oxygen.”

As you’re breathing in, Luff says to push your stomach out while pushing down and out with your diaphragm. Then exhale fully through your mouth.

2. Give yourself time to learn nose breathing.

Even though Dallam runs faster as nose breather, starting out was tough. Cut yourself some slack if you’re slowing down.

“I felt like I wasn’t getting enough air, which all human beings do at first,” he says. “But I also found that, in giving it time, I was able to feel comfortable at higher and higher levels, and eventually at all levels.”

Dallam says he won’t go back to mouth breathing. “If you keep practicing, over time your body downregulates its response to increasing CO2 levels,” he says, and it starts to sense that more CO2 is normal, so you get more comfortable.

Don’t try to overdo it the first few weeks and months. Instead, he says to slow your “volume of aerobic work to a point where you can breathe nasally without undue air hunger,” he says, which speeds up the adaptation process.

For most people, this means hovering at around 60% to 70% of your max effort, with limited bursts at full intensity. Dallam also recommends holding water in your mouth, “which allows you to breathe nasally without the need to constantly monitor yourself.”

3. Train yourself with box breathing.

Deep belly breathing is also known as diaphragmatic breathing. Habitual mouth breathers forget how to use the diaphragm because they didn’t need it. (Smaller chest muscles are sufficient to draw in air through the mouth.)

You can practice this anywhere, anytime. It’s an easy stress-relieving breathing technique, too.

By breathing with your belly instead of your chest, you strengthen the diaphragm. “This allows you to breathe effectively and easily through your nose,” Martinez says.