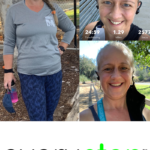 During mile 18 of the 2015 Los Angeles Marathon, Cricket M. had a meltdown. An ankle injury she sustained — but ignored — while training, plus the 90-degree heat, caused her to hit a wall. She walked the last eight miles to the finish line.

But rather than resting up, she ran a 10K and a half-marathon the next two weekends. Within a week, Cricket couldn’t put any weight on her foot. Not only did she have a damaged ankle tendon, but even worse, she says, was the emotional fallout: “The marathon broke me mentally. I didn’t enjoy running anymore; it was a miserable thing.”

Without the motivation to stay active — and with work requiring long hours and frequent travel — she stopped making time to run and stopped taking care of herself. And the weight she’d lost thanks to running came back.

Fast-forward to 2020 when the pandemic hit. “My world shut down completely,” says Cricket, who works in live theater.

Openfit’s Every Step takes you on live, guided walks with your favorite trainers and members of the Openfit community. Try it here today!

Sweating Out the Boredom

After sitting on the couch for a couple of weeks, she remembered something she used to say: “If I had more time, I’d take better care of myself and get back to running and walking.” Now she had the time. But she also was 50 pounds heavier than when she first started running in 2013 — and she could barely walk two blocks without excruciating knee pain.

Around this time, a friend posted on Facebook about Openfit. The two-week free trial sold Myers, who joined in April 2020.

“I found myself bored, so I’d open up the app and see what was going on,” she says. This got her to start taking classes.

The pounds started to come off, but not as quickly as Cricket wanted: “I told my doctor, ‘I’m working out two hours a day and I’m getting stronger. Why am I not losing weight faster?”

The doctor asked about her eating, which prompted Cricket to try Openfit’s One Minute Meal Plan. It was perfect for the non-cook.

“The app does the planning for me,” she says. “It tells me what to eat so I don’t have to figure it out. And if I don’t like an ingredient, it will suggest other comparable options.”

Taking the Next Step to Greater Weight Loss

But what really helped Cricket shed pounds was joining the live Every Step walking program in the fall. “I saw a post about it in the Facebook group,” she says. “I figured the community would give me accountability and be there to support and help me.”

Cricket appreciated that she could set her own pace and that the Every Step program challenged her to walk farther, longer, or faster.

“It was a gradual, gentle way to increase cardio without feeling burned out or that I was pushed beyond what I was able to do,” she says.

Above all, though, the community and trainers made the difference. “Even though I’m alone walking in my neighborhood, I’m chatting with others and sharing pictures,” she says. “I looked forward to my scheduled walks because I got to join my friends.”

And if she was in a bad mood, she knew her favorite trainers would help her turn it around by the end of her workout.

A Healthier and Pain-Free Life 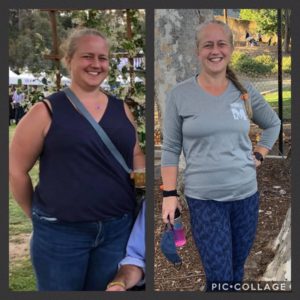 Once skeptical of how much weight she could lose walking, Cricket proved herself wrong: She’s 55 pounds lighter since April 2020 and has gone down two sizes (and counting).

“I was so shocked by the extraordinary changes that I went through just from walking,” she says.

Even better, the knee pain is gone.

Get Moving With Your Favorite Stars & Trainers — With Every Step Celebrity Walks!

Every Step Celebrity Walks are live walking classes led by a star or Openfit celebrity trainer. Sign up to ...

How Every Step “Shocked” Teammate Emily by Transforming Her Body

Who said that walking can't be a workout? Learn how Openfit Teammate Emily lost weight and inches around he...

Meet Katie, Who Lost 50 Pounds and 3 Sizes With Every Step

Determined to lose weight for good and be healthier, Openfit teammate Katie committed to walking every day ...