11 Chest and Triceps Exercises to Add to Your Next Workout

Blame it on Popeye, Arnold, or the Rock, but if you ask someone to pose like a strongman, they’ll inevitably puff up their chest and flex, and then turn to the side and make their their horseshoe-shaped triceps pop. At some point in our history, a jacked torso and chiseled arms became cultural symbols of strength; these days, bodybuilders don’t rest until they have to walk through a door frame sideways. But say you’re not vying for a Mr. or Ms. Olympia title. Do you really need to go all out with focused chest and triceps workouts?

Probably not, but you shouldn’t skimp on chest and triceps exercises in your workout program, says Cody Braun, Openfit fitness specialist. “The chest and triceps are involved in various functional movements that include pressing and overhead pressing,” he explains. Beyond showboating, the triceps and chest muscles allow you to get you through an arm workout full of push-ups and dips. They also fire up when you’re playing one-on-one basketball with your kids, rearranging furniture, or stowing your luggage in an overhead compartment.

But before you dive into chest and triceps exercises, let’s take a look at how these muscles actually work – together and separately.

Add These Chest and Triceps Exercises to Your Next Workout

We picked the best exercises that work your chest muscles and triceps muscles. But don’t forget to warm up! “Dynamic stretches for the chest and shoulder joint, such as pull-aparts or arm circles, are a good way to prep for exercise,” says Braun. “Myofascial release on the chest and triceps also helps prep for exercise by increasing blood flow and releasing tension that could be inhibiting motion.” So grab a foam roller and spend a few minutes massaging your triceps and chest muscles ready for the work ahead.

For optimal results, Braun recommends training the triceps and chest muscles two to three times a week. Regarding sets and reps, it all depends on your goals. If muscular endurance is your primary concern, keep the weights light, and aim for high rep (12-plus) sets with short (30 to 60 second) rest periods. If you want to focus on muscle growth, go a bit heavier and do three to six sets with one to two minutes of rest between them. Training for maximum strength? Choose a heavy weight that will allow you to complete just one to five reps. Do between four and six sets, resting three to five minutes in between.

Benefits: The bridge puts you in a decline position, which targets the sternal head of your pectoralis major. You’ll also work your glutes and hamstrings.

Benefits: This challenging variation on the classic push-up gives beginners a level to shoot for after they’ve mastered the flat version, and allows advanced trainees to work the muscles harder with fewer reps.

Benefits: By performing this press on an inclined bench, the clavicular (upper) head of the chest muscle gets special attention.

Benefits: This exercise works the entire chest, with special emphasis on the lower chest muscles. This is also one of the safer pressing angles for your shoulders. 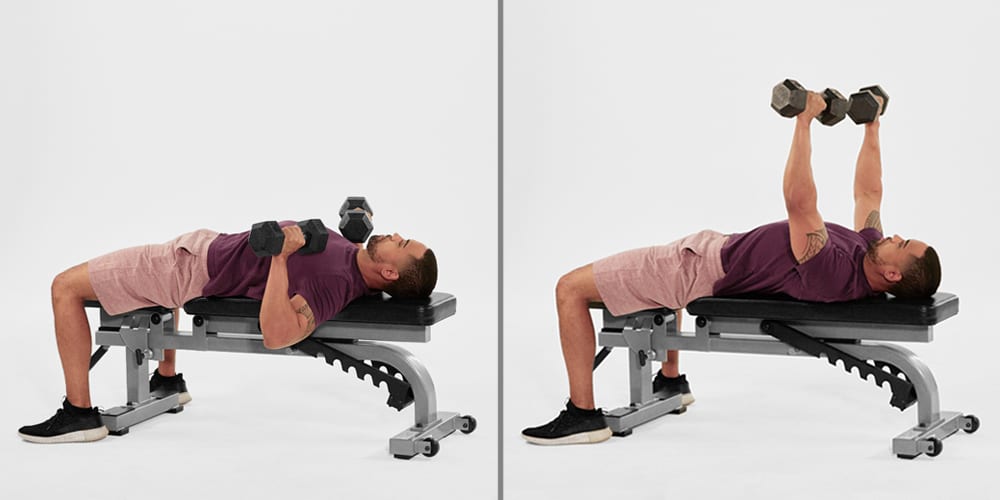 Benefits: This variation on the classic bench press forces your two sides to work equally, thus ensuring that your weaker side pulls its share of the weight.

Benefits: This combo move targets not only your triceps, but also your biceps and legs.

Benefits: This exercise emphasizes the long head of the triceps by working the muscle in the fully extended position. 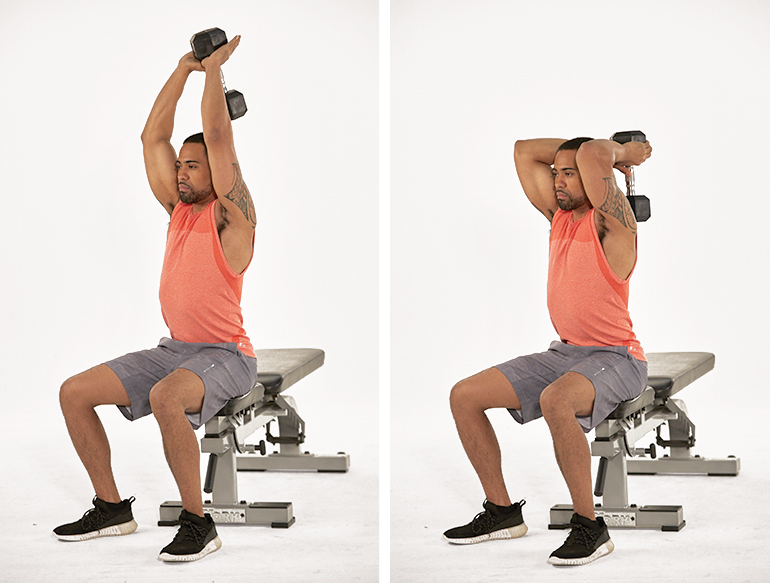 Benefits: This standing variation of the classic move optimizes muscle recruitment in the core while training each arm separately, helping to iron out muscle imbalances as it builds strength.

Benefits: This machine-based move forces the triceps to work hard when your arms are fully locked out, emphasizing the long head of the muscle.

Benefits: This challenging bodyweight move works the triceps in conjunction with the chest and shoulders.

Too tough? Perform the move with your hands on a sturdy chair or bench behind you and your feet on the floor.

Benefits: This exercise will work your chest, but because your hands are closer together than they are during a standard push-up, it increases the load on your triceps.

While the connection between your chest (on the front of your body) and your triceps (on the back of your upper arms) may not be immediately obvious, it does make sense to group them together when planning your workout. “These two muscles typically work together in exercises, so it’s wise to train them during the same workout,” explains Braun. The pecs main function is to adduct the arm from various angles, and the triceps extend the elbows – think of the push-up and bench press as examples. By hitting both muscle groups in the same workouts, and resting them both between those workouts, you can optimize their development.

But the fact that most chest exercises also hit the triceps is also why you don’t want to focus on the triceps first in a workout, which might cause you to tire your triceps out before you need them to assist in chest exercises, which typically require heavier weights.

The pectoralis major is the fan-shaped muscle that we associate with a well-developed chest, and the pectoralis minor located just under it. The pec major spans from your collarbone to your sternum, attaching to your humerus. This helps to brings your arms towards the body, turn your arms inward, and raise your arms.

The triceps brachii are the muscles found in the back of the upper arms. Each tricep is made up of three heads that span from the shoulder blade and upper portion of your humerus to your forearm. This allows your triceps to extend your elbow and aid in shoulder extension.

You’ve heard it before, but we’ll say it again: you can’t out-train a bad diet. You can be consistent with your workouts, but if you’re not paying attention to nutrition and supplementation, you’ll never see the best results. Muscles need the proper fuel to both grow and recover.

After your workout you want to focus on protein intake, which is crucial to muscle growth and repair. A supplement with 20 grams of protein per serving will help you maximize your gains, while keeping you in top shape for the following day’s workout.