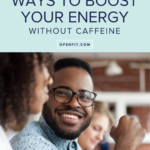 If a magic genie could grant someone one wish, we’d place our bets that it would be a wish for more energy. Well, with the exception of that one always-perky person you know who is somehow never tired even after being out drinking until 3 a.m. There’s a good reason why almost two-thirds of Americans drink coffee daily — sure, it tastes great, but the energetic side effects are pretty nice, too.

Yes, caffeine from java or tea can provide a pick-me-up, but it can often lead to an energy crash, which totally defeats the purpose. Luckily, there are plenty of other ways to stay awake. And many of them don’t even involve consuming something! Try these other tricks to have higher and more consistent energy levels all day long — no caffeine required.

If you feel like Susan in accounting bums you out while Joe in HR leaves you laughing and happy, that’s something worth noting. “Certain people have an energizing effect on others,” says Mike Christian, Ph.D., professor of organizational behavior at the Kenan-Flagler Business School at the University of North Carolina at Chapel Hill. “There are people who, when you interact with them, give you a feeling of vitality. There are also people you might think of as corrosive, who take your energy.”

Now, you might not always be able to avoid the energy-suckers completely, but you can try to interact with those who keep your energy tank full as much as possible.

Twenty-five minutes of mindfulness meditation can improve cognitive function and energy levels, according to a study of 31 yoga practitioners published in the journal Mindfulness. The study also found that Hatha yoga had similar effects, but if you don’t have the space to move on your mat, finding a quiet room and clearing your mind can do the trick.

Need some help hopping onto the mediation train? Try following these 5 tips to get started.

3. Take the right kind of break

Many of us are so tied to our computers that we sometimes forget to get up and pee. Stop trying to be a hero. “If you are at a peak of fatigue and take 10 minutes to fully detach, and then come back to work,” Christian says, “you will work more efficiently and be more effective.”

But just a bathroom or Instagram break won’t totally do it. Instead, Christian suggests social connection, so go introduce yourself to the new intern (just make sure they give you energy, not take it!). Or, take a walk outside for some fresh air. Not only can it give you a boost of energy, but it can also improve your creativity!

You don’t need to hit the gym for an hour to feel more awake. In a University of Georgia study, 18 college women who reported sleeping less than 45 hours a week underwent three different conditions over the course of three days: They took a 50-milligram caffeine pill one day, took a placebo pill another day, and walked up and down stairs for 10 minutes the third day. When they hit the stairs, they reported feeling more energetic afterward, whereas taking both pills caused no change.

Although this is a small study, it sounds like a good enough reason to hit the stairs on your lunch break! Plus, it definitely won’t hurt when it comes to booty gains.

5. Tell yourself you’re an energy machine

“When we convince ourselves we are not depleted, we have better self-regulation,” Christian says. He cites a study published in Social Psychological and Personality Science in 2011 as an example: Researchers gave study participants a low- or high-depletion exercise that required crossing out letters in words printed on yellow paper. Before doing the task, half of each group learned that the color yellow exhausts people’s mental abilities, while the others learned that yellow replenishes people’s mental abilities.

Studies suggest that smelling peppermint may help increase alertness. Plus, it has a number of other benefits, like soothing headaches, which is great, because who can feel energized with a pounding head?

You can use peppermint in an oil diffuser, or keep a small bottle of peppermint essential oil on your desk for those afternoon slumps. Simply rub some on your hands and then cup them over your nose. Take a big inhale, and feel the energy flow through your senses! It can be pretty potent, so make sure you don’t get any too close to your eyes.

7. Keep your coffee cup in view

Just seeing things that remind us of coffee may boost arousal, according to new research published in the journal Consciousness and Cognition. In a series of four studies, scientists found that people exposed to coffee-related cues perceived time as shorter and thought in more specific, detailed terms. That is, they experienced subjective and physiological arousal.

Consider this an excuse to not take your empty coffee mug to the kitchen. Set it by your laptop and maybe you’ll feel more caffeinated without having to drink another cup.

OK, so this tip does involve drinking something, but it’s not coffee! There are plenty of reasons to drink more water, and one of them is to avoid dehydration. It can lead to feelings of fatigue and declined alertness and perceived ability to concentrate, according to two studies of healthy young women.

Plus, the more water you drink, the more often you’ll have to get up and go to the bathroom. And as we learned before, getting up from your desk is another way to wake up! It’s a win-win.