What Is Blue Light? And Is It Disturbing Your Sleep? 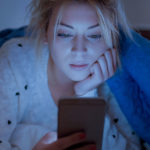 Have you ever lost track of time while swiping through your favorite app or binge watching your favorite Netflix show, only to glance at the clock and realize you’ve stayed up way past your bedtime? Did you know these habits might be messing with your sleep?

That’s because many devices emit something known as blue light. The largest source of blue light is the sun, but in our screen-obsessed world, as this study explains, our exposure to electric light of all kinds at night has “blurred the boundaries” between night and day.

Though there are no exact figures on how many people’s sleep troubles stem from blue light, between 50 and 70 million Americans suffer from sleep problems.

And, the fact that so many of us go to bed with our phones or fall asleep on the couch watching Netflix suggests it could be a contributor to sleep problems.

What Is Blue Light?

Scientifically speaking, blue light is short wavelength light; it’s the shortness of the wavelength that makes it appear bright to human eyes.

In the last two decades, our exposure to this type of light has increased dramatically, with a vast chunk of the global population getting daily exposure.

Not necessarily. Studies have shown that it increases alertness, so it may help you shake off grogginess when you want to work or study. Which makes sense considering the largest source of it is the sun.

But, some researchers believe that increasing blue light exposure during the day and reducing it at night can be used to increase academic performance and learning.

In some cases, blue light can even used as a treatment for sleep disorders, seasonal affective disorders and jet lag.

Most light wavelengths are capable of disrupting the circadian rhythm, the body’s internal 24-hour clock that makes us sleepy at night and alert during the day. Even the light emitted by a standard table lamp can interfere with sleep patterns.

But, blue light is the worst offender of all light wavelengths. Research has shown that blue light exposure one hour before going to bed delayed sleep by 30 minutes.

Blue light has a negative affect on your sleep because it suppresses the secretion of melatonin, a hormone that sends the message to the body that it’s time to catch Zs. Melatonin is a key factor regarding the regulation of the circadian rhythm.

Do My iPhone, iPad, Laptop, or TV Emit Blue Light?

Yes. Blue light is found in virtually any flat screen, including e-readers, smartphones, computers, and even compact fluorescent lamps.

Screens are powered by LED lights, which are small and bright, making them an ideal light source for the thin screens that make modern electronics so sleek. It also allows screens to remain clearly visible in daylight; without it, you would have a lot of difficulty seeing the screen under sunny conditions.

What Can You Do About It?

The answer is pretty simple: Limit your exposure by avoiding screens after the sun goes down.

If that’s not realistic, reduce your device’s brightness setting to cut down on it. You can also enable a setting or app that makes your device mimic the blue light found naturally at that time of day. In other words, the device will function normally during the day, but after sunset that spectrum will be reduced.

iPhones and iPads have a setting called Night Shift that does this. On Apple computers, there is an app called F.lux that works similarly. For Android devices, look for apps such as Night Shift: Blue Light Filter and Twilight.

Or, you can pick up some blue light blockers like these or one of those below.

5. Alenns Black and Pink Blockers, see the price on Amazon