10 of the Best Exercises to Add to Your Arm Workouts

They go by many names: pipes, pythons, rocks, guns. Whatever you call them, athletic-looking arms — firehose thick or ropey and lean — are a hallmark of the über-fit, standing out even when you’re fully dressed.

But the benefits of the so-called best arm workout are more than cosmetic. “Physical strength and power are translated to the outside world through your limbs,” says Trevor Thieme, C.S.C.S., Openfit’s senior manager of fitness and nutrition content. “So strong arms aren’t just important for stretching the limits of your shirtsleeves — they’re important for allowing you to more effectively perform the tasks of everyday life, like carrying groceries, lifting furniture, or sealing a deal with a firm handshake.”

10 of the Best Exercises to Add to Your Arm Workouts

Below are 10 of the most effective arm exercises we know. Each of them hits your biceps or triceps slightly differently to maximize arm development.

Thieme recommends working one or two arm exercises for each upper muscle (biceps and triceps) into your workout two or three times a week. “The growth stimulus from a strength training session lasts about 48 hours, so targeting a muscle group more than once a week will help optimize your results.”

That said, he cautions, “it’s also important not to overdo it. A smart training program will challenge every muscle group, including your biceps and triceps, often enough to stimulate growth without compromising recovery.”

In and out bicep curl

Benefits: This move alternately stresses the two heads of each biceps muscle — long and short — with two different grip positions.

No dumbbells? Hold the handles of a resistance band and step on the center of the tubing.

Benefits: This variation on the biceps curl creates a peak contraction of the biceps muscle, helping to create definition. 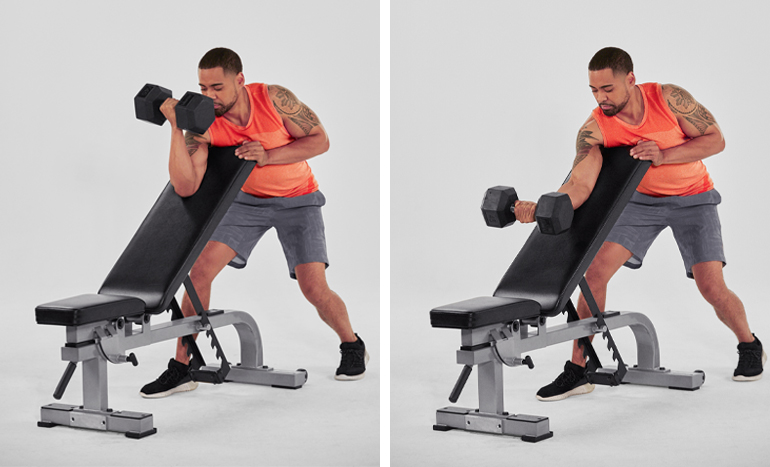 Benefits: This exercise works the biceps with the upper arm in a vertical orientation, which maximizes tension on the muscle in the fully-contracted position. 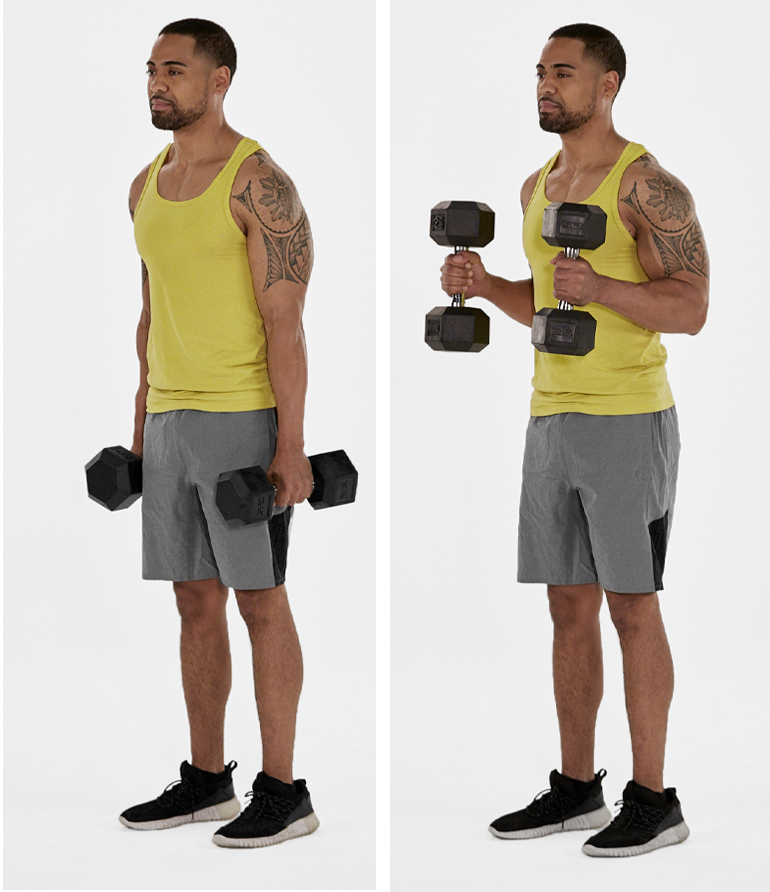 Benefits: Switching from an underhand to a neutral grip (so your palm faces inward), increases the load on the brachialis, a muscle lying to the outside of your biceps that adds shape and definition to your upper arm. 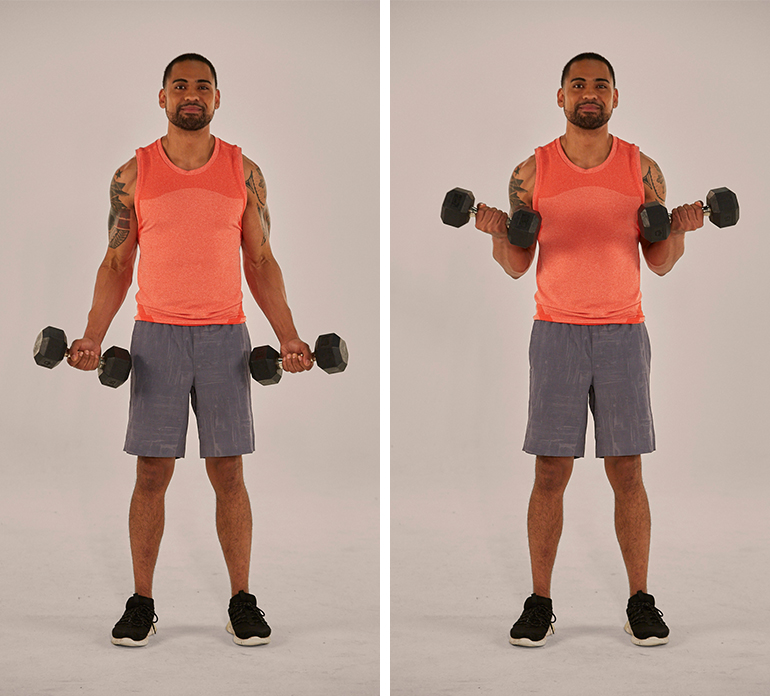 Benefits: This classic exercise allows you to work the biceps directly using the heaviest possible weight.

Benefits: This move targets both heads of the biceps in a mechanically weak position, allowing you to work harder using less weight, fewer reps, or both.

Benefits: This exercise both isolates the triceps and works it from a fully extended position, increasing the tension on this key upper arm muscle.

Benefits: Few other exercises trigger as much activity in all three heads of the triceps as the kickback, according to a study by the American Council on Exercise. This alternating-grip variation boosts the benefits by making it even more challenging.

Benefits: This machine-based move forces the triceps to work hard when your arms are fully locked out, emphasizing the long head of the muscle.

Benefits: This challenging bodyweight move works the triceps in conjunction with the chest and shoulders.

Too tough? Perform the move with your hands on a sturdy chair or bench behind you and your feet on the floor. 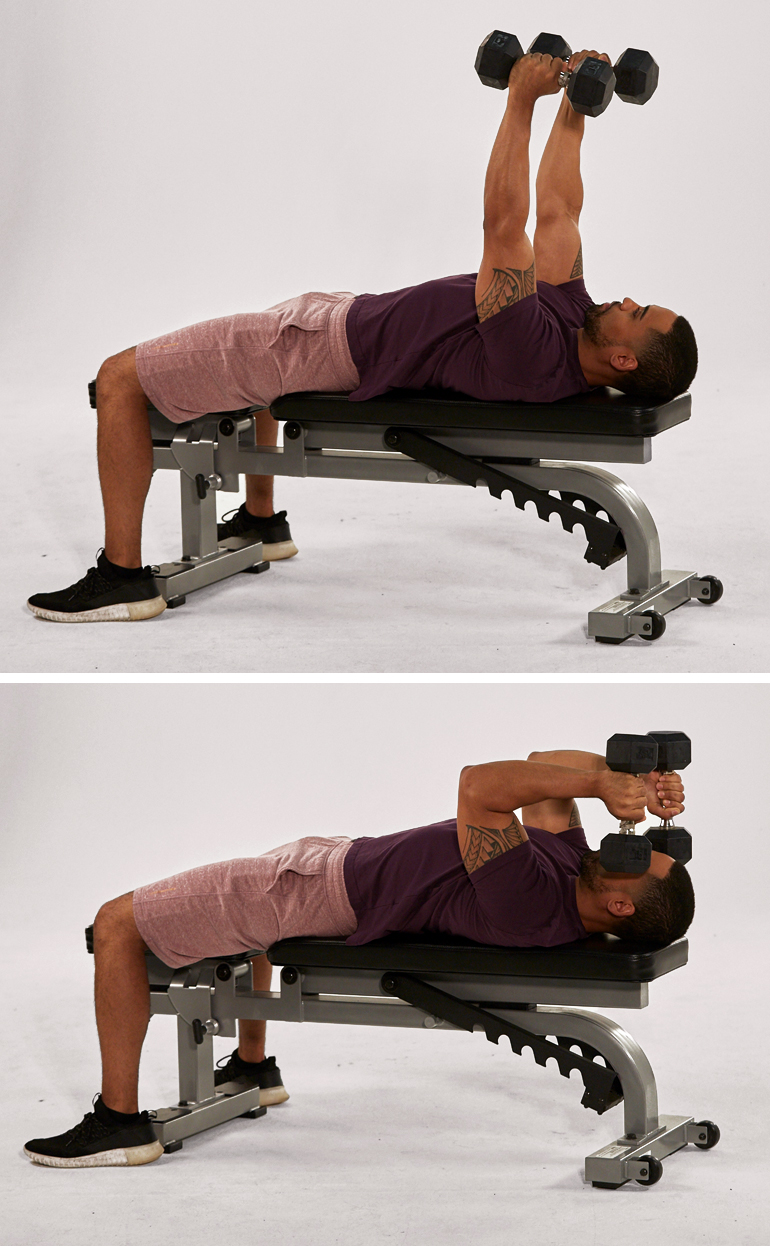 Benefits: This exercise emphasizes the long head of the triceps by working the muscle in the fully extended position.

Stand holding a single dumbbell horizontally in both hands at shoulder height, palms on the weighted ends, with your elbows tucked. This is your starting position.

The upper arms consist of two major muscle groups: the biceps on the front of the arm, which flex, or close, the elbow joint, and the triceps on the back of the arm, which extend, or open it. Anatomists refer to muscles like these as antagonist pairs — muscles whose actions oppose each other.

Though it appears to be a single, continuous muscle, your biceps actually has two heads (short and long). Both of them attach separately to the scapula and then fuse together to form the “belly” of the muscle before attaching via a tendon to the upper forearm.

In addition to flexing your elbow, the biceps also help to supinate your hand, turning it from a palm-down to a palm-up position. You can see this function at work when you twist your wrist while flexing your elbow: your biceps will “pop up” as you wrist turns inward.

The triceps is larger than the biceps, making up two-thirds of the mass of the upper arm. It’s the extensor muscle of the elbow, and it has three heads. The long head — the one closest to your torso — originates at the scapula (shoulder blade). As a result, you’ll also feel it contract in movements where the backs of your shoulders are active, like bent-over lateral raises.

The lateral and medial heads attach to the humerus (upper arm bone) near the shoulder. The medial head is located beneath the other two, which together form the classic horseshoe shape of the developed muscle. All three fuse together and attach to the elbow via the same tendon.

Essential to building the muscles of your upper arms — and anywhere else — is eating properly. Muscles don’t grow unless you feed them. So if building impressive guns is your objective, a balanced diet of good carbs, healthy fats, and (especially) sufficient protein is essential.

Supplementation can also assist in your arm-amplifying efforts. A shake containing approximately 20 grams of protein consumed shortly after your workout — when your muscles are most receptive — delivers the maximum dose that the average person can synthesize in a sitting.

Creatine, another supplement, has been shown to help boost muscle growth and strength, as well as recovery between sets, allowing you to do more work per workout.